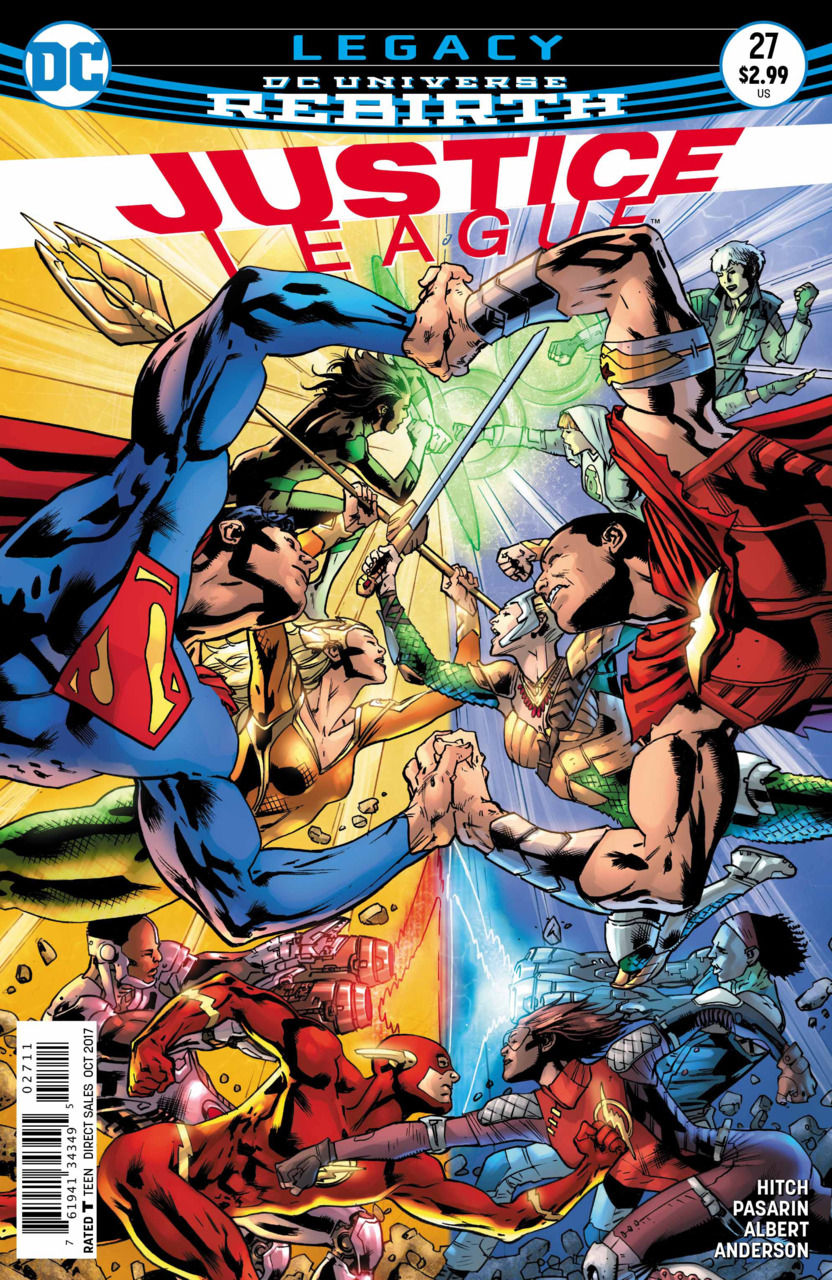 Overview: The Justice League minus Batman bring the kids from the future to the Watchtower. The kids tell the League who they are and what happened in the future. Meanwhile in the Batcave, Batman comes face to face with an old friend who shatters his nose.

Synopsis (spoilers ahead): “Legacy Part Two” opens in the Watchtower. The League has brought the kids they met at the end of last issue to determine their identities and find out what their story is. The kids are excited to be here. They remember being up in the satellite when they were younger.

Cyborg performs a deep-tissue scan to determine DNA and power frequencies, basically the works. Dory tells Mera that they came back in time to find all of the League. In their time, the League has been gone for years. They chose the past because they were sure to find them.

Cruise is the first to say that she along with Jenny and Jason are the kids of Jessica Cruz. Flash asks for evidence and Jenny breaks down and hugs Jessica in tears begging her to accept them. Cruise tells Flash that her given name is Nora Allen and she is the daughter of Jessica and Barry.

Superman notices that Wonder Woman has not said anything. She admits that the kids are telling the truth but there is something else. Wonder Woman approaches Hunter and asks him if she is his mother. Hunter is hostile to Diana saying that he knew she would be like this as he puts it. Cruise tries to step in to console Hunter when Dory tells her that Hunter has every right to be angry. Diana asks Hunter why he is so angry and Hunter tells her that she has done nothing. She abandoned him when he was born because he was not female and therefore not an Amazon. He grabs Diana’s lasso and says that she should use it on him to face the truth. Superman steps in and Diana withdraws telling then that Hunter is telling the truth.

Jenny meanwhile is surrounded by yellow light saying that this is all horrible. Jason takes her hand to try to calm her down. Cruise tells Barry that she got her speed from her father but her brother and sister got the entire lantern spectrum from Jessica. Jessica approaches Jenny to console her. She tells Jenny that everything will be okay and Jenny calms down.

Cyborg finishes the scans and he confirms that they are definitely the children of the Justice League. Superman suggest proper introductions. Barry introduces himself and Jessica to Nora, Jenny and Jason. Jason says that first names are weird and Jessica counters with the fact that it is weird from their side as well.

Cyborg approaches Cube. He notices that Cube’s DNA is circuitry from a possible mother box. Cube says that he was born that way and he introduces himself as George Marvin Stone. Cube says he likes football but the joy is taken out when he can calculate and predict every shot. Cyborg makes a comment about gambling.

Dory very regally calls Mera her mother. She identifies herself as Eldoris Curry daughter of Arthur and Mera. She is the queen of Oceania and sits on the throne of Atlantis. She brought magic back to the waters and united the seven seas. Mera likes her.

Superman talks to Hunter. Hunter tells Clark that he grew up with Jon as his big brother. Clark and Lois took Hunter in after Diana abandoned him. Diana just stands by. Hunter says that he hung around Damian as well until he changes the subject. Hunter takes another jab at Diana and leads to silence among the three.

Simon asks why his kid is not with them. Jenny and Jason tell him that he ends up leading the Yellow Lanterns after Sinestro’s death. It is not clear here if it is Thal Sinestro or Soranik Sinestro, his daughter and current leader of the Yellow Lanterns.

Superman brings everyone together to get a rundown on why they came back in time. Cube and Cyborg sync up and Cyborg is flooded with information and tells Cube that he should show the others what they have been through. The early times were great, they were growing up the kids of the greatest heroes of the planet. Their powers grew and they were trained by the League. Everything changed however when the world went dark. There was a superhuman war that destroyed the world. The kids were hidden away on Olympus which had been abandoned by the gods. The League never came back even though they waited. Eventually they found their way back to the world. They tried to help as best as they could but there was no sign of the Justice League. Dory became Serenity and claimed her throne as queen of the last free nation of the world. The rest tried to bring hope but then Sovereign came. She took Olympus and smashed it into the earth. From there, she took over the rest of the world. The kids found the last forever stones and with Vincent’s help they went to the past.

At the Batcave, Batman is using his program Genie to show him all the data on the Kindred. Genie asks Bruce if he wants to play a game. Batman says later. He discovers that the song of the Kindred was a signal and it is still being transmitted in Midway City. He sends the data to the Watchtower but the transmission is being jammed. Genie asks if he and Aquaman would like to play a game. Bruce turns and is immediately hit by gas grenades. Bruce is attacked in the smoke and his face is busted by a mechanical appendage. The assailant is revealed to be Curry from the future and he needs to borrow his stuff. Next issue, the secret of hunter prince.

Analysis: This is the exposition part of the story that is common in a lot of arcs. The first issue sets up and this issue answers some questions but not all of them. I do not feel this is effective here. This issue is boring with the only action beat in the end involving the surprise attack on Batman which is becoming a common trope. Wasn’t it in the Button that Reverse Flash surprised Batman in the Batcave?

With that said it was helpful in identifying each of the kid characters. We get information on why the two “Green Lantern” kids used Red and Yellow light constructs. The question here is how did they get the power from all the emotional spectrum from Jessica? Does it have something to do with the Speed force? I do not know the answer and I hope to get that answered but I do have a suspicion that that might not be.

As far as the art goes, I do not like how Wonder Woman is drawn here. Her body is okay, but her face is wrong. She does not look human. I do not think that it is how this artist draws women. Mera, Dory and Jessica all look fine.

I do want to comment on the cover art here. This is the second time Mera is depicted in an Aquaman like costume that she does not wear in the issue. In the issue she is in her Mera costume.

Final Thoughts: In addition to the questions I proposed above, I want to reiterate the possibility that Sovereign is Diana. It is clearly from the writing that the character is female. I also find it uncharacteristic of Diana to abandon her child because he was male. That does not follow with the characterization of Diana in the New 52. She brought the male children of the Amazons back to Themyscira after they were abandoned by their mothers. This abandonment point seams hypocritical for Diana. Just like Diana’s views in the previous issue also is hypocritical for this character.

The computer in the Batcave, Genie. Did I miss something here? I do not recall this program in Batman’s arsenal and it seems to have a stranger personality, “shall we play a game” is creepy enough in the movie War Games, but to see it in the Batcave is scaring.

What does Curry want in the past? It is more than just stopping the kids. He tells Bruce that he needs his stuff. What is his endgame in this?

Interesting issue, but not as action packed as I would like in a Justice League comic. It gave me more questionable moments than the superhero action I expected especially since the cover alludes to a fight between the two sides. Overall, it is a meh for me. Not great and not terrible at the same time.