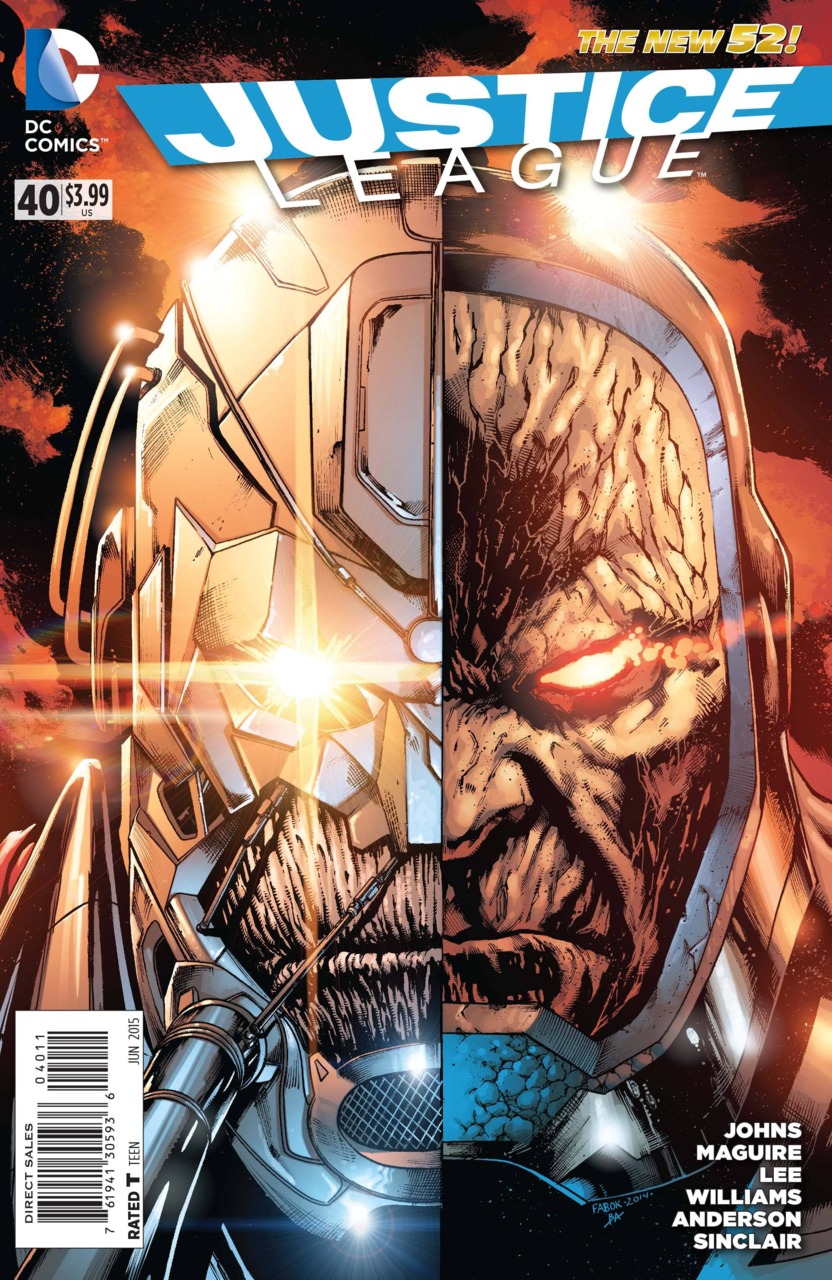 Taking a bit of a break from “Convergence,” this month’s issue of “Justice League” acts as a prologue to the upcoming storyline entitled Darkseid War. As the story opens, a voice is talking about how the universe gets remade over and over again and how this death and rebirth has been an ongoing cycle for countless millennia. As the character is talking, we get to see one of the Amazo Virus infected people who has retained his powers…acting as a hero, he is attempting to rescue his neighbor’s kidnapped daughter. He is sadly killed and the culprit escapes. As the man is about to die, he sees what he believes to be an angel…however it is revealed to be our speaker – Metron, one of the New Gods. As the keeper of all knowledge (past and present) he has seen a war coming that pits two of the most powerful evil beings against one another. He decides that he must stop the war from happening at all costs.

Metron then gives a bit of his history on how he is destined to observe and not interfere…and that he had only broken that tenant once. In order to stop a war between Apokolips and New Genesis, Metron is shown to have struck a deal of peace between its two warring – Darkseid and Highfather. We then see that both of these men traded sons so as establish a non-violent pact between the two worlds. Orion, son of Darkseid is sent to New Genesis…while Mr Miracle is sent to Apokolips.

As Metron continued to observe, an event occurs that Metron recalls as being unprepared for. A being that came to be known as the Anti-Monitor sought to destroy the Multiverse and a vast group of heroes was gathered in order to stop him. In the end, the Anti-Monitor failed and the universes were reborn into one. Metron then later recalls other events that disrupted the flow of the universe: during the Zero Hour when Parallax (Hal Jordan) and Extant disrupted the time stream; during the Infinite Crisis when Superboy-Prime attempted to resurrect Earth 2; and finally when Flash attempted to save his mother, causing the alternate reality of Flashpoint to be created…and subsequently reality being reborn into the New 52 universe.

Returning to the present, Metron is shown arriving on the war torn Earth 3 (where the Crime Syndicate originated from). Metron comes upon the Anti-Monitor and refers to him as Mobius. As the two entities talk, Metron reveals that the Anti-Monitor used to be in his position…sitting on the Mobius Chair and observing the universe. At some point, the Anti-Monitor chose to become “The Destroyer” and Metron took his place. As Metron pleads that reality cannot survive another Crisis, he describes how fragile the time stream is…even going so far as referencing Brainiac and how he sees a Convergence of universes and times happening.

Metron eventually suggests a pact between himself and the Anti-Monitor – one that will have Metron cease observing the universe and focusing solely on discovering a way to change the Anti-Monitor back into the being that he once was…only if he agrees to stop his destruction. When the Anti-Monitor seems to disregard his plan, Metron warns that he may incur the wrath of Darkseid himself. Suddenly Metron is blasted from his chair and lands on the ground nearby, the Anti-Monitor turns and states that he wants to war with Darkseid as his death “is the key to all.” As the Anti-Monitor proclaims that the time of the New Gods is over and that the age of the Anti-God will begin, and hooded figure steps out of the darkness and proclaims “death to my father. Death to Darkseid.”

Please note that there is discussion below regarding the end of “Batman: Endgame” as well as the FCBD “Divergence” issue. SPOILERS.

So once again DC is putting me through the ringer in regards to continuity…although I feel that this time I’m actually really excited about what is to come. First off, I love we got some explanation in regards to Metron…a character that I had only ever seen before but never had a chance to read. I also liked that this character has been observing the DC universe for (clearly) a long period of time and even gives a brief history lesson in regards to the war between New Genesis and Apokolips, as well as the events of “Crisis On Infinite Earths,” “Zero Hour,” “Infinite Crisis,” and “Flashpoint.” The fact that he references the act of death and rebirth over and over again clearly emphasizes the importance of what is to come within the pages of “Justice League.”

Although we didn’t get to see any of our heroes in this issue, I felt that this was a perfect setup to the coming war between the Anti-Monitor and Darkseid. The Anti-Monitor has always been one of DC’s biggest bads around…bigger and badder than Joker, Ra’s Al Ghul or any number of Batman’s Rogues Gallery put together. This guy destroys universes.

In the original “Crisis,” the Anti-Monitor is shown to be the opposite of the good Monitor and he seeks the destruction of the Multiverse so he can reshape it as his own…it seems that he still holds that goal but may be going about it in a different manner. He references that Darkseid’s death is the key changing everything (a vague statement if there ever was one) and he seeks to instigate a war with him…something that he is being helped with by an unknown New God figure. Not sure who this woman is…maybe somebody can shed some light on this subject. All I know, is that Darkseid’s death is never a good thing. He did die at one point following the “Countdown to Final Crisis” and that caused a whole mess of things across the space/time continuum.

On a more Batman side of things…when is this story taking place? Metron openly references the “Convergence” event, so we know that this is going to be a current project…but as of the ending to Scott Snyder’s “Endgame” Batman is dead. Well, not really…we all know our Caped Crusader can’t be killed, but there is currently no known explanation to his survival. For all intents and purposes he is dead. My question then is…who is Batman during this event?

In a recent interview I read with Geoff Johns, Bruce Wayne will be in the cowl throughout the events of “Darkseid War.” But…if we know that James Gordon takes over with his Robo-Bat suit, when exactly does “Endgame” take place??? Guess this is one of those times I have to take off my glasses, tilt my head, squint and hope that this somehow falls into place.

Overall I liked this issue…although nothing action oriented happen it was a great refresher on past “Crisis” events and a good lead in to the upcoming “Darkseid War.”