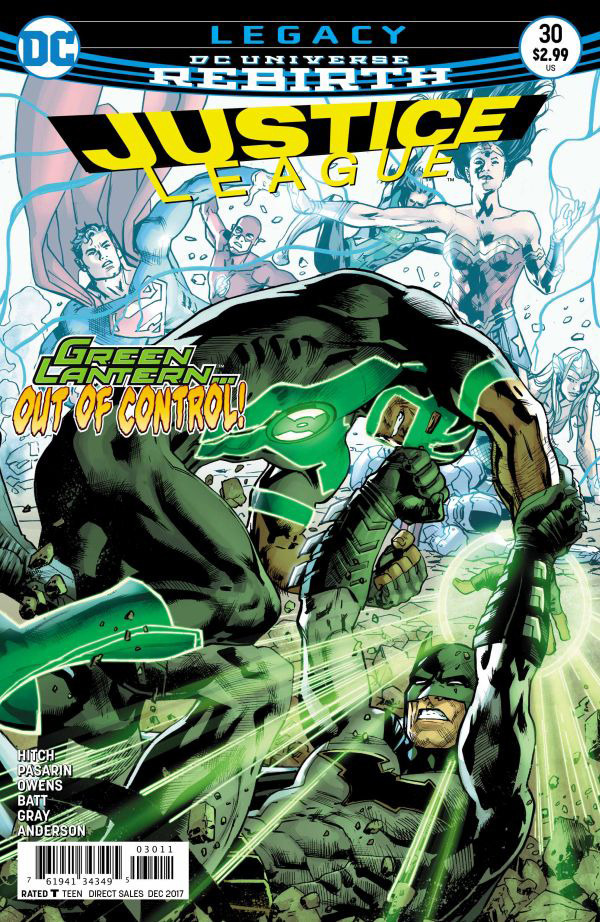 Overview: Mera, Curry and Serenity join the others in their fight with the darkness as Wonder Woman tries to hold it back. The identity of the Sovereign is revealed to be Queen Hippolyta of the Amazon’s.

Synopsis (spoilers ahead): “Legacy Part Four” opens with Wonder Woman on her knees. She is covered by the darkness but she is resisting the call to kill them starting with Steve Trevor. Steve tries to reach Diana while the kids can see and hear that the darkness is already in front of them. Simon who is still under control of the darkness moves to attack Steve even though he is trying to fight it. The twins, Jason and Jenny jump in front of Steve to engage Simon. The soldiers call the kids to stand down or else they will use lethal force. Steve orders everyone to stand down. All throughout this exchange, we hear the call to kill them all. Hunter approaches Steve to try to tell him about the darkness. Steve just wants to know who these kids are. Cruise tells him that they are from the future and Cube tells Steve that Diana is Hunter’s mother. Hunter tells Steve that he is not his father. Hunter admits that they thought Diana was involved in the future but the darkness coming is too early. Hunter can hear that the darkness is saying to kill them all except for Hunter, he is its child and he needs to be nurtured.

On Mount Olympus now at Amnesty, Bay the Sovereign appears. Curry bows to her and Mera and Serenity confront the new comer. Sovereign says the Curry has found her and she is his queen and Mera tells her that she not Sovereign will be his queen and his wife one day. Serenity attacks saying she knows what happened. Sovereign makes an interesting statement about if Serenity saw Mera die would her hope die as hers did. Mera moves in to attack and Curry stands telling her that this is not why they are here. Sovereign asks Mera if Serenity told her what happened to Curry. Did she tell Mera that she did this to him. Mera questions Serenity. Sovereign orders Curry to tell Mera what happened. Curry says that after Mera’s death, Serenity banished him from the seas. He did not die but was forced to scavenge body parts from Cyborg to survive. Curry opens a Boom Tube and tells Sovereign that he will take her to her daughter. Mera approaches the Boom Tube to follow.

Meanwhile Batman is in his plane several miles away from Amnesty Bay. Genie is looking for Victor but what it found was two signals that are almost Cyborg but is not exactly. Batman surmises that one is Curry and that signal now has vanished. The other signal is from Cube and genie gives Bruce the coordinates. Batman tries to get the AI to call him Batman, but not to much success.

Back at Midway City, Wonder Woman stands and approaches Steve. She is unable to hold the darkness back for long. If she lets go it will possess everybody. She has seen the future, the Darkness came back with the children and combined with its past self strengthening itself. Diana tells Steve to keep Hunter safe because he is the only one it does not want her to kill. Sovereign arrives and attacks the soldiers. The kids scatter and attack Sovereign as Curry, Mera, and Serenity emerge from the Boom Tube. Curry tries to stop Serenity from getting involved. She brushes her hand aside and she and Mera engage Sovereign. The darkness asks Diana if she remembers the future and the brutality of the Sovereign. Diana tells it that she remembers. Sovereign had a darkness of her own and she inflicted her pain on the world. Simon meanwhile notices that the focus has shifted and he is able to break free from the influence of the Darkness. He tries to coordinate the attacks on Sovereign.

We join the rest of the League. They are in some black realm and they are comparing notes on what happened to them. Cyborg is able to determine that they are in a pocket of folded space inside of a Boom Tube and he thinks he can get them out. Cyborg finds a file in his system. He plays it and they find that it is a message from Curry. Curry admits that he came back to kill the League per orders from the Sovereign. When he returned to the past, he started to feel hope again and he knows that Sovereign must be stopped.

In Midway City, Curry joins the fight against Sovereign. Sovereign slices into Baz and uses some power that knocks all the combatants except her out. She is left standing with Wonder Woman. She reveals her true identity as Hippolyta. The others wake up and see that Sovereign is Hippolyta. A Boom Tube opens and the League arrive to find the carnage. Jessica sees Simon down and Hippolyta is talking to Diana telling her that the world does not deserve her. The darkness rises up and infects the Justice League. Next issue the End of an Era.

Analysis: This story is getting old for me. It is back in a dragging pattern where we are getting info dumps again. This time the dumper is Curry. It is nice to see him becoming heroic again, but the message he leaves the League is dull. I feel it is a rehash of what we already know. The reveal that Sovereign is Hippolyta also left me underwhelmed.

The art again is detailed, but I still do not like how the artist is drawing the character’s lips. I like the detailed backgrounds the artist gives the reader. It is also really good since he has to draw this darkness which cannot be easy.

Final Thoughts: I am hoping that this story will wrap up soon, I am losing interest fast.