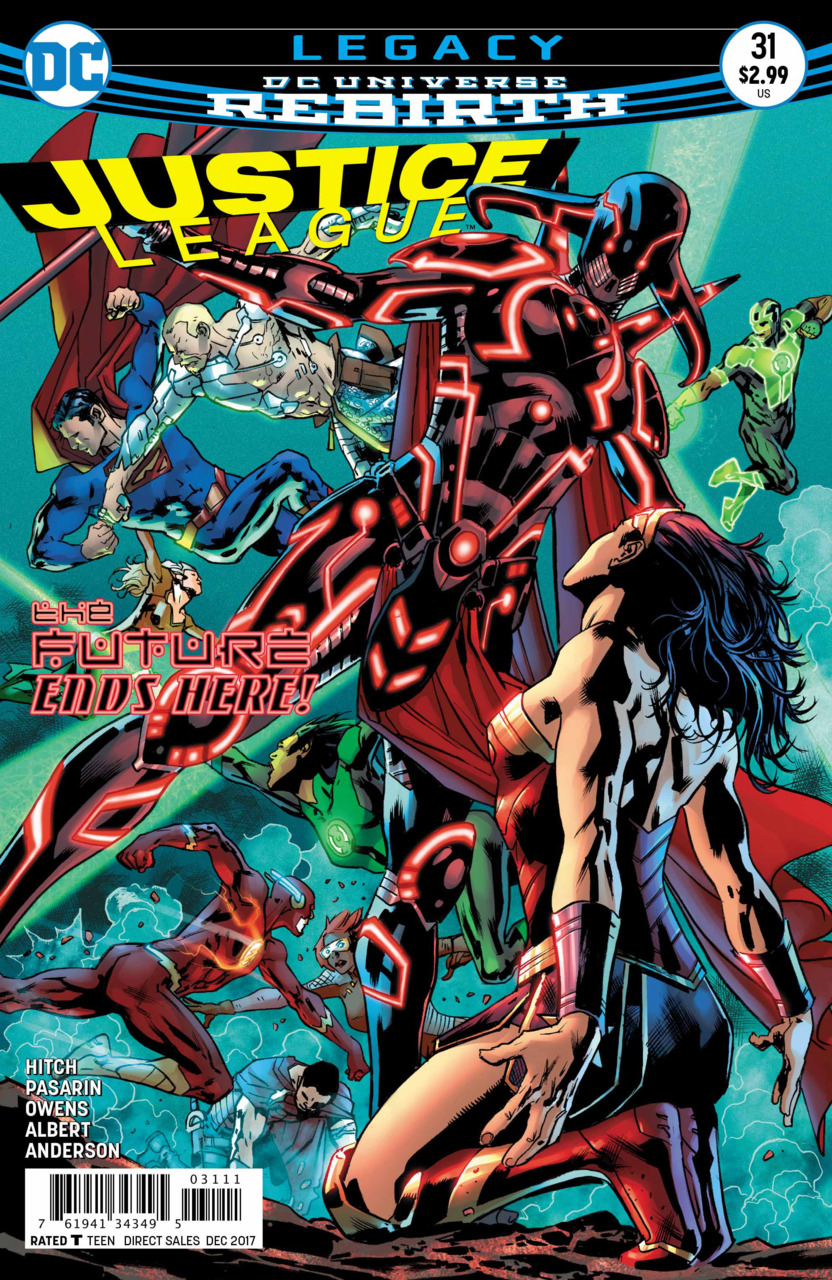 Overview: The Justice League and the kids from the future face off as the League is controlled by the darkness. The true intentions of Diana’s mother is revealed and the League with the help of their children are able to turn the darkness back.

Synopsis (spoilers ahead): Diana brutally attacks her mother finally succumbing to the darkness in repeating that she will kill her mother. This leaves Curry and the children of the future to face off with the darkness controlled Justice League preparing to kill their own children. The combatants pair off: Mera vs Dory, Cube vs, Cyborg, Superman attacks Curry, Flash and Cruise fight and the twins vs Jessica. Hunter meanwhile flies out.

Wonder Woman and her mother continue this fight with Diana easily defeating her opponent who is not fighting back. Hunter attacks Diana. Flash tells Cruise that he wants to have children with Iris and that she should not exist so he will kill her to save his future. Superman beats Curry even ripping off one of his arms.

Batman arrives and attacks Superman using his red solar emitter to weaken him. Curry is able to focus on the fight with his daughter and wife. Mera insists that Dory lied to her and jumps to spear her with her trident. Curry jumps in front and takes the attack giving Dory time to blast Mera away. Curry explains to Dory that the darkness took them all and it was either her or Mera. He was forced to kill his wife and he cannot do it again. Mera impairs Curry through his back.

The twins fight Jessica, but she is too powerful for them. Jennifer checks on Simon and finds that he is not breathing. She asks Jason if he can go black, she thinks she can go white. The two tap into those lantern powers and the darkness recognizes what is happening and Simon is revived and Jessica is knocked out.

Cube and Cyborg are locked in combat. Cube tries to merge with Victor, but under the influence of the darkness, he resists.

Hunter gets his grandmother’s staff from Diana and smacks her down with it. He goes in for the killing shot thinking that killing her will end this nightmare. Sovereign asks Hunter if he wonders why Diana abandoned him. It is revealed that the darkness conceived Hunter. He would be its embodiment, a new Darkseid or Trigon. She actually gave Hunter up to save him. She was able to hold the darkness back long enough to give him to the Kents. After that Diana killed herself, knowing she was to infect the world. It was too late, the darkness already started to infect the world but Hunter was safe. Hunter realizes that this is the truth and he stops his attack. Hippolyta then tells that the darkness is in reality the fear, rage, and intolerance that is in the hearts of the people the heroes protect. Because of Diana’s death, Hippolyta in turn turned to the darkness. Hunter tells her that Diana is not dead yet.

Cyborg and Cube continue their struggle. Cube continues to try to reach his father. He is finally able to download his memories into Cyborg and he sees the good times they had as a family. This frees Cyborg from the darkness. Hunter and Hippolyta struggle with Diana, Hunter can hear that the darkness is starting to weaken. Batman continues to hold Superman trying to get through to him but the red solar flare is starting to go out.

Curry tells Dory that they have to end this fight now or they may have to kill Mera again. Dory implores that they need to show her their love for her and they need a miracle. Simon and Jessica struggle when the twins float up into the air with the indigo power of compassion to drown out the anger and they say hate is replaced by love, although we do not see this in the art. The indigo power manifests and removes the darkness from the League and gathers it into a huge ball.

Hippolyta does not think the darkness can be destroyed, but she might be strong enough to contain it but she cannot do it alone. Curry offers his help and Dory protests. He holds her with his one good arm and tells her to go home, they might find everything they are looking for. The tow take the darkness by boom trouble to nowhere forever. Before she leaves, Diana’s mother tells Diana that she is so glad she found her again and she loves her, then she vanishes leaving a tearful Diana.

One week later in Amnesty Bay, the League and their children recover. It is now time to say their farewells. Flash tells the kids that they will not cease to exist since they already exist, alternate timelines. Cube downloads all his memories into Cyborg and he tells him that he is going to enjoy making new ones with his father. Diana asks Hunter to give her a chance if she is in the future. Hunter tells her that he is proud right now. Dory transports the kids back to the future leaving the League to face the future together. Next issue ties in to Metal.

Analysis: This issue was definitely better than the lead up issues. It makes me believe that this story will read better as a collected story. I finally got the action and heart I was looking for. We learn the true futures of Diana and Aquaman and the pain that those futures caused everyone. It is interesting to learn that the darkness was in reality present all along because it was the fears of the people.

The art here was a just as great in its details and backgrounds as before. It was also a little better in its closeup with the characters. I especially liked the close up of a tearful Diana when her mother left with the darkness. I would have liked to have seen a manifestation of the violet light of love when the twins went compassion since they also mentioned love. The last panel however I was not so sure about. Mera looks quizzical and the team just seems to have strange expressions on the faces. Overall, this was definitely a fitting finale for this arc.

Final Thoughts: The last question I am left with is why was Curry wearing a Black Lantern ring? It was mentioned early on and then dropped in the story except he was consistently drawn wearing the ring.