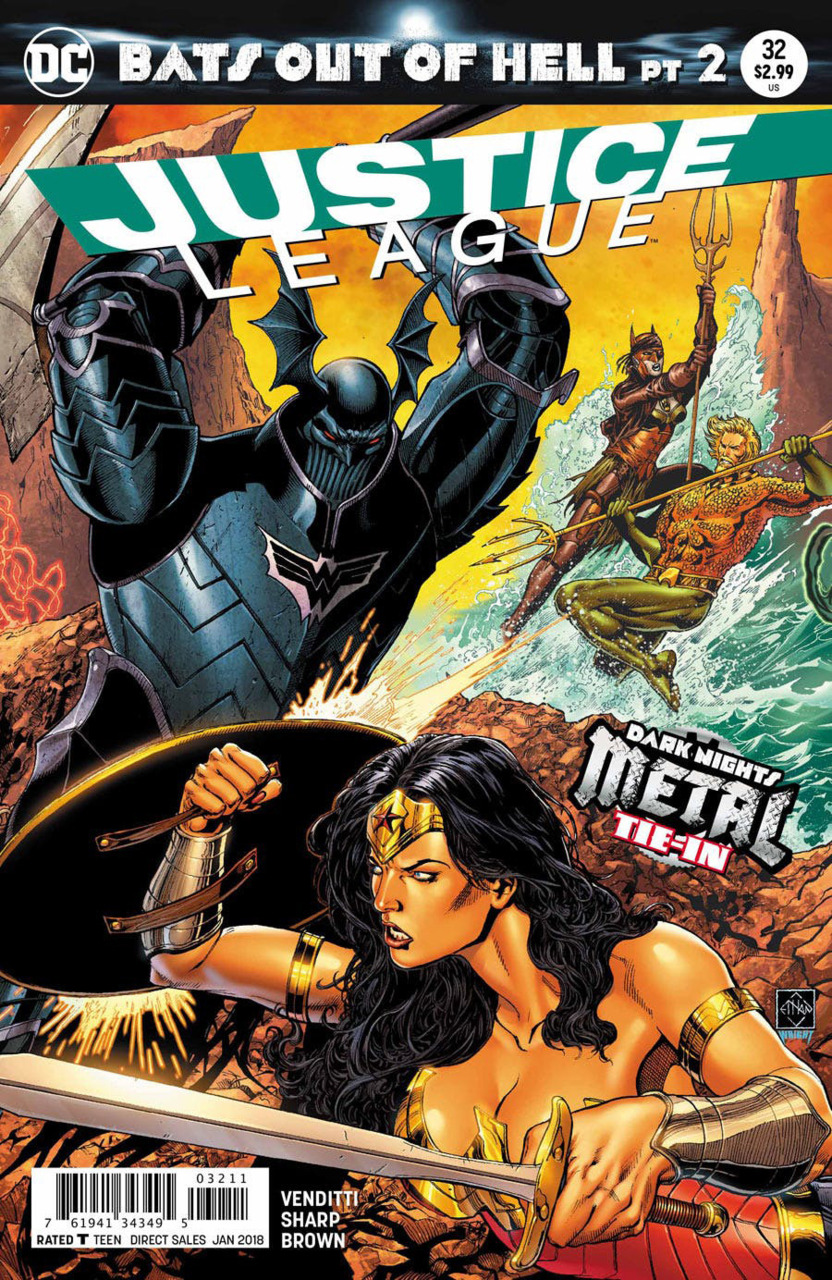 Overview: Cyborg attempts to rally the Justice League against the Dark Knights.

Editor’s Note: This issue is the second part of the Bats Out of Hell crossover that started last week in The Flash #33. The crossover will continue next week with Hal Jordan and the Green Lantern Corps #32.

Synopsis (spoilers ahead): Cyborg remembers his past as a football star, how his brain was his superpower then and now, as a hero. Though Batman and Superman cannot help, being trapped in other universes, Wonder Woman, Green Lantern, Flash and Aquaman all prepare to face their Dark Knights deep beneath the earth under many major cities.

The Flash tries to outrace the Red Death (Batman combined with Flash), but the evil billionaire throws a huge number of Red Death-mobiles at Barry.

Aquaman seeks to rescue his beloved Mera from the Drowned (female Batman combined with Aquawoman), but the Drowned claims that her mutated hammerhead shark/crab monstrosity she rides is Mera, twisted into the Drowned’s evil vision.

Wonder Woman faces off against the Merciless (Batman combined with Ares), she seems to have an edge, but the man playing a god strikes an enormous golden drachma forged from the soul-coins of dead Amazons, causing an army of zombie women warriors to attack Diana.

Hal Jordan struggles against the Dawnbreaker (Batman combined with Green Lantern), as his ring cannot effectively fight a Lantern ring twisted to murder and rage. Amidst his teammates’ despair, Cyborg promises that he is the Justice League’s secret weapon, leading into the next issue, Hal Jordan and the Green Lantern Corps #32.

Analysis: Liam Sharp brings the same attention to detail he brought to Wonder Woman to this tie-in issue of the Bats Out Of Hell portion of Dark Knights: Metal. Primarily dealing with the way the Justice League as a whole is handling the invasion of the evil versions of Batman, the crossover is unfortunately mostly brief moments of action (usually our heroes failing to stop the villains) to give the impression that more than just the main Metal title is being impacted by the event. However, despite the number of crossovers, the fact that Metal itself is taking six months, and DC isn’t willing to make the chaotic, catastrophic Metal timeline its status quo for that length of time, the result is a feeling like nothing that happens in Metal really matters that much. Maybe one or two titles will have a character death or relationship change as a result, but on the whole, since we know that so far no titles are cancelled, no major changes (like what happened with Scott Snyder’s last major event, Batman: Endgame, which left Gotham without Bruce Wayne as Batman for a year in a linewide editorial mandate) are forthcoming.

That being said, Green Lantern writer Robert Venditti does a decent job of making his viewpoint character, Cyborg, likeable, as he narrates the Justice League’s failing tactics in fighting the many evil Batmen. The various fight scene pieces are fun, and well rendered by Sharp (probably getting his Batman and Wonder Woman designs and rendering limber for his yet to be announced Batman/Wonder Woman title).

Seeing each member of the League face up against their evil Batman combination counterpart is fun, but the fact that each combat vignette follows the same structure of “superhero meets their evil version and fails to defeat them” leads to a repetitive, anti-narrative feeling to the book. The end of the issue, with Cyborg thinking definitively about his unrevealed plan, feels more than a bit hollow, since we’ve seen Cyborg do nothing but reminisce and narrate his friend’s difficulties. One might point out that expecting a satisfying conclusion to the second part of a four part story that is itself the second crossover tie-in event (after the Gotham Resistance crossover tie-in) is perhaps expecting too much. But the point of a tie-in should be to do more than just “have stuff going on related to the main event”; rather, it should provide elements that contribute to the ongoing narrative, but also have its own compelling story line. The best tie-in issues to events have done that – Chuck Dixon’s Huntress/Spoiler: Blunt Trauma tie-in to the Cataclysm event, or the Future’s End and Endgame one-shot tie-ins to those respective events. Having crossover tie-ins in other books does nothing more than give the creative teams on those books have a bit of catch-up/prep time for their own arcs. Given that so many of the books involved in the tie-ins to Metal are double-shipping, that extra time does seem logical from a production standpoint, but it doesn’t make the collectors of that book very happy. Those who pick up the issues themselves simply for the crossover will more than likely not continue collecting that book, since their tie-in issue has very, very little to do with the ongoing events of the book itself, so other than the aforementioned logistical reasons, there’s no good justification for the Bats Out Of Hell crossover not being its own miniseries, similar to the way the Evil Batman Dark Knights one-shots are being released independent of any ongoing series.

Final Thoughts: Though Venditti and especially Sharp provide detail and character moments for all of the available Justice League members, ultimately this middle section of the story falls pretty flat due to repetitive structure and lack of any narrative progress.