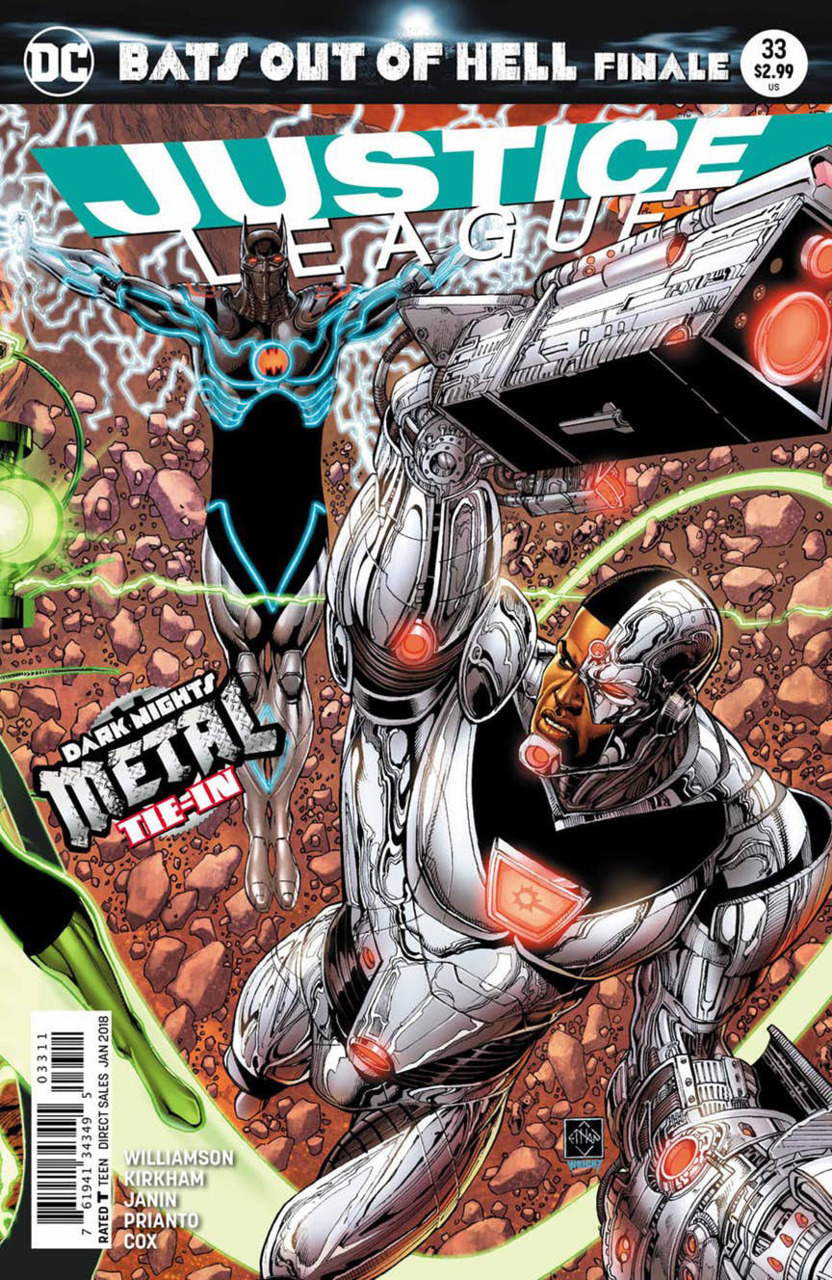 Overview: Cyborg faces titanic threats both inside and out as the Bats Out Of Hell tie-in crossover concludes.

Editor’s Note: This issue is the final part of the Bats Out of Hell crossover that started with The Flash #33, continued in Justice League #32 and was last seen in Hal Jordan and the Green Lantern Corps #32 last week.

Synopsis (spoilers ahead): The evil Dark Knights Batmen have captured the Justice League (and a few other characters, like Deathstroke), and the Batman Who Laughs leads them all in chains while laughing about how the Justice League are a superstitious and cowardly lot. Cyborg, our narrator, shudders internally at the sound of an evil Batman laughing like the Joker. As he is tortured, his Mother Box offers him a devil’s bargain: give up his memory, his self, his soul, to become a being of unimaginable power and defeat the great evil. As Vic wavers, feeling the urgency of this moment, a shaking, desperate voice penetrates to his internal struggle, begging him to stay himself and not give into the Mother Box.

Suddenly, Batman the Murder Machine is hacked as Cyborg bursts free. He proclaims that he is a Victor, and designates his new form as Cyborg One Million. Freeing his teammates from their bonds, the entire League strikes back as a united front, with Cyborg acting as quarterback.

As they form their plan to exit the prison of the Dark Knights, Cyborg rescues the source of the desperate voice which saved him from Mother Box’s control – Raven. They embrace, and then Cyborg leads the team into Hypertime, proclaiming to the Dark Knights that they know how to beat Bruce.

Taking this temporary respite, Victor reveals that he compromised with Mother Box – he didn’t fully give in, but he did give it partial control, and now is constantly struggling to maintain control. He proclaims that he and Raven will be the masterminds, or coach, of the struggle to defeat the Dark Multiverse, and sends the League off on their mission to hack their own Multiverse. The Batman Who Laughs, however, claims that all is still going as planned…

Analysis: The four-part Bats Out Of Hell crossover tie-in to Scott Snyder and Greg Capullo’s Dark Knights: Metal event concludes with Flash writer Joshua Williamson tying up the threads he and Robert Vendetti wove together. Using Cyborg as the narrator and focal point of this crossover gave an emotional arc to a character who hasn’t featured as strongly as some of his more famous teammates. Building heavily on Victor’s past (and his name, in a characteristic bit of obvious but fun Williamson wordplay), Cyborg resists the temptation to despair and sacrifice his soul to defeat unimaginable evil. Artist Mikel Janin provides the art for his internal struggle, and his work here is much more complex and detailed than the sometimes overly sparse work on the still lovely War of Jokes and Riddles over in the Batman title. Tyler Kirkham’s energetic, sketchy linework fills the bulk of the pages, and though a few figures are wonky (Wonder Woman surging into the fight seems kind of limp compared to most of her teammates), the strains of the bi-weekly schedule don’t show too strongly other than the two-artist requirement.

The conclusion of this arc gives a fun twist on the “Batman knows how to beat the Justice League” story.  Cyborg tells the evil Batmen that the League, in turn, knows how to beat Bruce. Though Bats Out Of Hell isn’t quite tightly written enough to serve as a worthy counterbalance to stories like JLA: Tower of Babel, but it’s nice to see Williamson playing with that idea.

With the Metal crossover complete, next month, veteran writer Christopher Priest will start his eagerly anticipated run with artist Pete Woods kicking off.

Final Thoughts: Williamson and his collaborators propel the Metal storyline forward as Cyborg leads the Justice League in the fight against the Dark Knights.