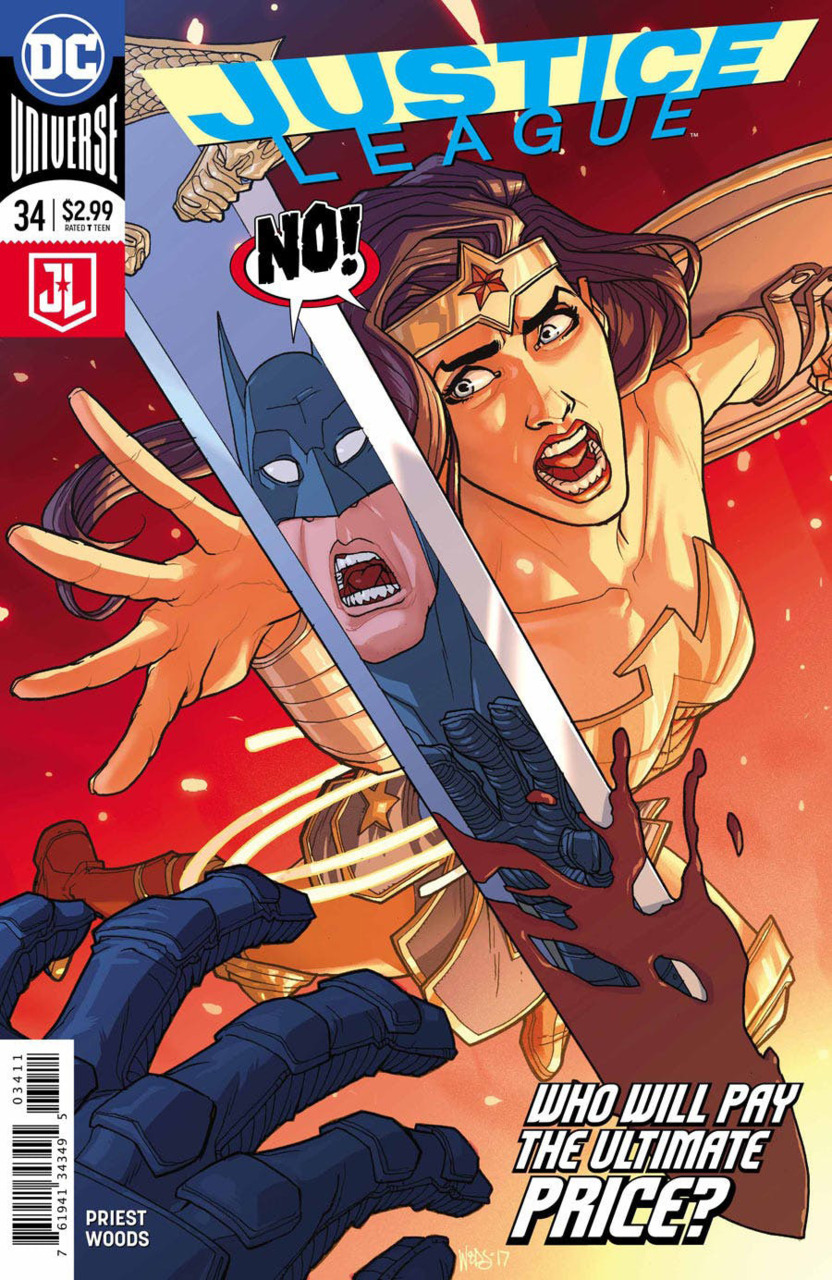 Overview: The stress of Batman’s life causes a few errors in judgment as the Justice League faces three different threats.

Synopsis (spoilers ahead): On the planet Dione, Green Lantern Simon Baz is interrupted at prayer by alien Buzzy, who exclaims that “everything” is wrong. Soaring into space, he calls his partner, Jessica Cruz. He tells her that an 80% charged ring won’t be good enough, as a huge space fleet is headed to Earth.

At Wayne Manor, Bruce Wayne is collapsed on his bed after three days without serious sleep. Despite Alfred’s warning, he heeds the Justice League alert and teleports to the Watchtower satellite. Cyborg tells him of three situations – hostage crisis with terrorists, an earthquake, and the invasion fleet. Batman orders Jessica to turn back and help with the earthquake, since the fleet won’t hit Earth for an hour. He assigns Cruz, Superman, and Flash to the natural disaster, while Wonder Woman, Aquaman, and himself handle the terrorists. He leaves the satellite, telling Cyborg to stay in reserve.

As she reaches the scene, Cruz receives an update from Baz – no response to hails, shields resisting the power ring’s abilities. He wonders if he should fire a warning shot, but Cruz runs it by Batman first. Batman brushes her off, telling Simon not to do anything yet.

In disguise, Batman rides a bus driven by Aquaman around the terrorist location. Arthur has to swerve to avoid hitting a child running in the street, causing the terrorists to startle. Diana captures them, but Cyborg pulls Aquaman to help with the earthquake, which is by a seaside village. Batman sends the heavy hitters from the quake to space, but as he corrects his assignment mistake, an FBI team breaches the terrorist area which Diana already has under control. The flashbangs accidentally explode one of the hostage’s oxygen tanks, causing the death of one hostage and terrorist.

Aquaman surveys the scene at the quake, and realizes a tsunami is coming. He and Flash stop the wave as Simon tells Superman, Jessica, and Cyborg that the “invasion” fleet is actually just a massive tourist convoy.

Day four of Batman without sleep dawns, and Clark tries to get Bruce to see perspective. However, all Bruce can see is his failure to save everyone, and his mistake in team delegation. Clark says he should take some time to rest, and Bruce seems to feel the team might be better without him.

Analysis: Christopher Priest takes over Justice League, bringing a sense of reality, to our favorite heroes as people who have a job – saving the world – and do so with a great deal of skill. The Justice League in Priest’s hands are professionals – the writer’s said in many interviews that just as he turned Deathstroke into an anti-heroic drama in the mold of the Sopranos or House MD, he wants to turn Justice League into a workplace drama. The sense of a status quo, of people having roles to fill, is present in all of the scenes, which gives this world of gods and monsters a sense of solidity that it can often miss. Another element in his interviews seems to parallel the world building of Watchmen and The Incredibles – superheroes in a world which sees them as an intrusion. Batman’s mistake here, while not seeming to cause too much damage, foreshadows a conflict between “The People vs. the Justice League,” as the title of the arc suggests.

Pete Woods, veteran artist for DC (he had several runs on very large titles, from Robin with Chuck Dixon and Jon Lewis with a bright cartoony look, to a dark and gritty approach to Detective Comics) handle pencils, inks, and colors for this issue, and does a fantastic job. All the more impressive for being the sole artist for a double-shipping book, though unless this issue was prepped well over six months ago, there’s no way that level of work by one person can keep up with the punishing schedule. While he’s doing it, though, we are in for a treat. Beautifully clean lines, energetic blocky figure work, carefully rendered shadows, and incredibly appealing posing of these iconic heroes mark every panel of this book.

After a period of overly bombastic Justice League stories, Priest’s injection of mundanity into Justice League seems like a road full of exciting character and conflict options. This first issue promises intense things for readers, and we hope you’ll stick around to see if those promises are paid off.

Final Thoughts: Priest sets up his status quo carefully, fleshing out the conflicts, as Woods depicts the team in action with strikingly polished art.