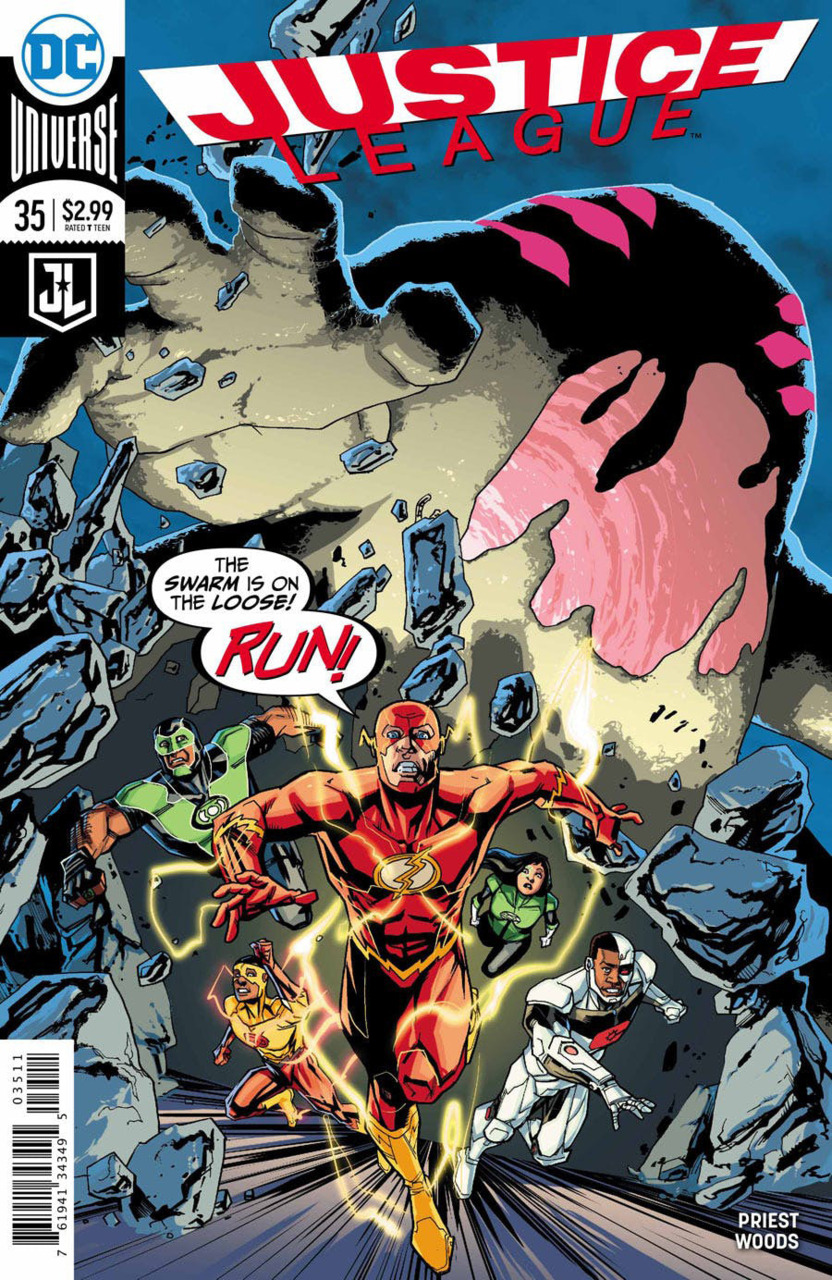 Overview: Business as usual – a killer bug from outer space attacks Earth – but hostility towards the Justice League is rising.

Synopsis (spoilers ahead): In New York, Wonder Woman is debriefed by the police about last issue’s terrorist attack. She has flashbacks of the events as the police detectives’ mundane conversation floats around her ears. The police wish she had stayed around to provide evidence, but Diana just wants to retrieve her sword, which is currently being held as evidence, since it was used to murder a nun. The main detective seems to think the Justice League is an interference, while Wonder Woman argues that they are professionals. Weary of the detective’s hostility, Wonder Woman teleports back to the satellite.

On the satellite, Green Lantern Jessica Cruz is startled in the restroom by a huge armored figure. Though they initially fight intensely, the intruder tells Jessica his name is Glenn Gammeron, and is seeking John Jones for help. Jessica doesn’t know of Jones, being a new League member.

Diana arrives at the satellite with a seeming policeman in tow, but it turns out to be Batman in disguise, having procured her sword. Jessica greets them, and brings Batman to the newcomer. He tells Glenn that the Martian Manhunter has been missing for some time, and discovers that Glenn is a bounty hunter who believes his latest capture may have unleashed a cockroach-like swarm, threatening San Francisco. Jessica calls up Barry Allen, the Flash, to get help eradicating the bugs, and he and Wally, Kid Flash, set out on their mission. As the rest of the League joins them, Cyborg and Glenn exchange information about their respective cultures and personalities. Kid Flash finds the swarm eating a dog before his eyes, but a much larger colony attacks in the form of a hive-mind monster the size of a building by the Bay.

At HQ, Wonder Woman, Superman, and Batman muse about their place in the world. Wonder Woman is still disturbed by the failure in the terrorist attack, and Batman believes she blames him but doesn’t want to, causing turmoil in her mind and heart.

The Lanterns encase the Swarm in a construct to get it away from people, and the League debates how to destroy it. Glenn and Cyborg use a combination of chemical and sonic attacks to destroy the monster and capture the space bug causing the Swarm.

Later, while debriefing, the League sees coverage of their saving the city interrupted by a report about the terrorist attack last issue, blaming the League for the nun’s death. The report goes on to show footage of the terrorist killing the nun with Wonder Woman’s sword, and says the video has gone viral.

Analysis: Christopher Priest and Pete Woods’ second issue of Justice League highlights just how idiosyncratic and high-level this run is going to be. In addition to crafting a complicated but manageable threat for the League to fight for this week’s action scene, Priest also uses a huge number of details to characterize each member of the League and their world. Barry coaches Wally on a police athletic team, Jessica listens to music on huge headphones, Simon chafes at Barry’s scientific mumbo-jumbo, and Batman and Wonder Woman have a powerful, but tumultuous partnership born of long experience. Though on the surface, the story might seem simple – find the bugs, save the city – but the way Priest and Woods present it fills the world of the League with nuance and complexity.

Woods, again doing all of the art by himself, provides rich and appealing art which conveys the expressions and action perfectly while still being remarkably consistent. The initial battle between Jessica and bounty hunter Glenn is full of humorous but thrilling beats, and the Swarm battle presents some fairly horrifying imagery of the cockroaches acting as a huge hive-mind monster.

Though this issue does have a self-contained arc, the through-line of Wonder Woman and Batman’s guilt and anger about the failure in the terrorist attack last issue provides a lot of tension going forwards. Priest carefully handles all the threads of the characters and consequences of the workplace drama he’s setup. As a result, though it’s not quite as satisfying as a single issue as last time, it’s excellent in driving the story forward and building anticipation of the larger conflict to come – that of public relations.

Final Thoughts:  The new era of Justice League forges forward under Christopher Priest and Pete Woods, providing enjoyment and complexity as the world reacts to the League’s success and failure.