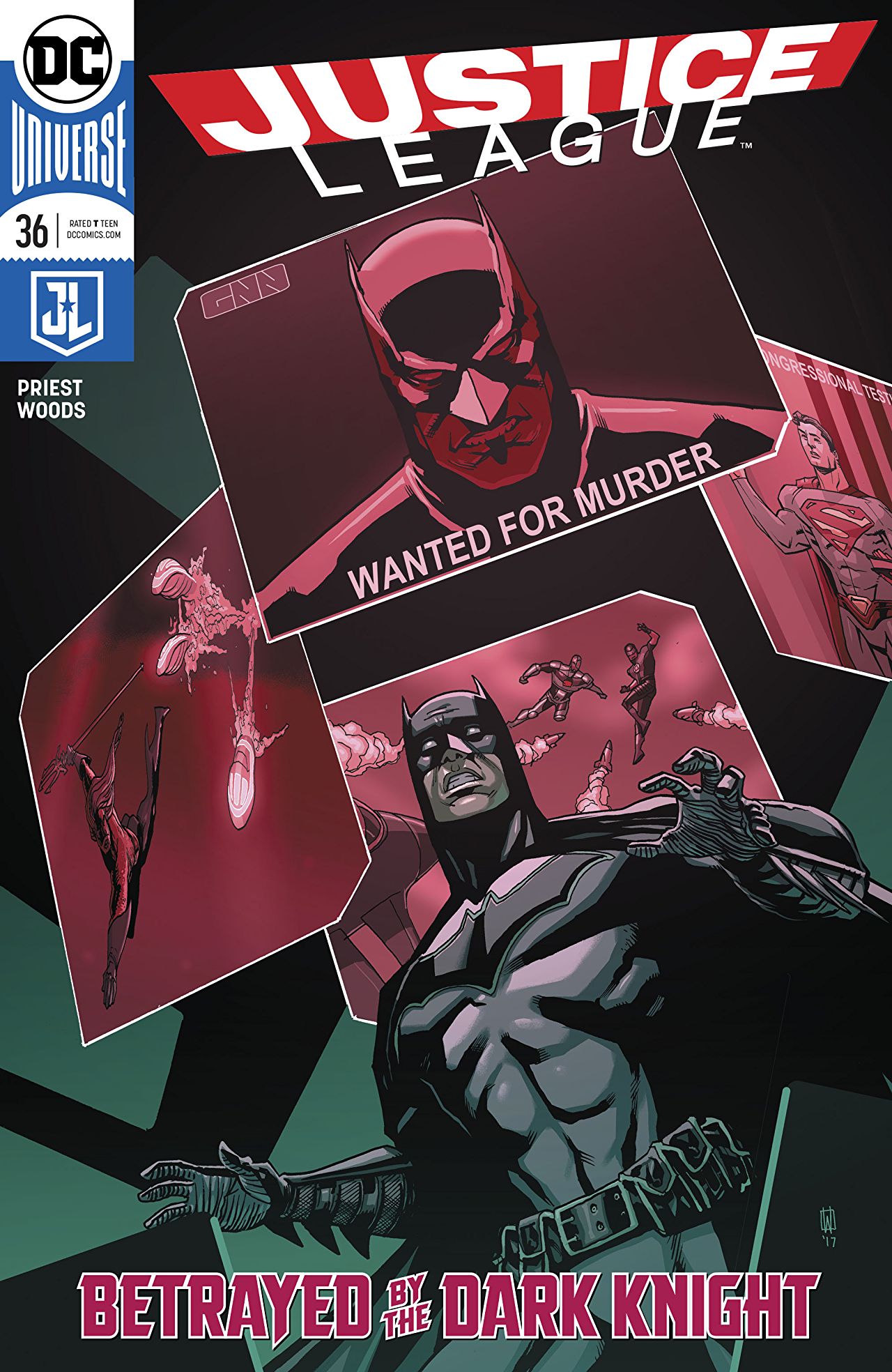 Overview: As the Justice League continues their daily job of defending Earth, hidden forces manipulate the forces lined up against the world’s finest heroes.

Synopsis (spoilers ahead): In the US House of Representatives, Representative Hasgrove (from Priest’s Deathstroke run) chairs a committee inquiring into the Justice League’s actions against terrorists two issues ago, which ended in the death of one of the civilians involved. Hasgrove pontificates for a page, then finally allows Superman to get started.

Later, Batman is photographed apparently killing Hasgrove in a car crash with a Batarang.

Nightwing and Bruce train together in the woods near Gotham. Bruce claims that the murderous Batman is a copycat, while Dick highlights the difference between his philosophy of saving people and Batman’s of revenge and trying to fix an impossible system. Batman seems to have some doubts of his own about his own motivations, just as he is teleported back to the Justice League satellite. Jessica Cruz (Green Lantern) reports that the League sucks, plain and simple.

Undersea, near China, Aquaman, Superman, Cyborg, and Simon Baz (Green Lantern) attempt to retrieve a nuclear sub from within the Chinese waterspace. Batman calls them off, saying that the Chinese have the right to make the decision. Superman agrees that the League must be defensive, not super-dictators, over Green Lantern’s objections.  Aquaman, however, is a head of state, and to save the aquatic animals being harmed by the submarine, makes the political decision to remove the sub himself from Chinese space. Diana is torn between Batman and Aquaman’s perspectives, especially after the murder of Hasgrove, seemingly linked to the congresswoman’s attack on the League’s methods. As Bruce is torn apart by all these arguments, the underwater team is faced with the actions of the US sub’s crew, who are unaware that they are under the League’s control, and are about to activate the sub’s self-destruct to prevent the nuclear missiles from falling into enemy hands. Green Lantern teleports inside to see if he can reason with them, but is greeted with gunfire. The sailors inside and their captain are hostile to the League, saying they are a team. This prompts Superman to stop Aquaman so that Batman can make the call.

The US negotiates a rescue through the UN by the Germans, who are close trading partners with the Chinese, allowing a diplomatic solution. Simon is still frustrated with Batman and the impact his reputation is having on the rest of the League and the people they are trying to help. He asks Superman to talk to Batman, and in response, Superman asks him to have lunch so he can get to know the League newbie a bit better. Cyborg finds the copycat Batman who killed Hasgrove, and Batman, ignoring Wonder Woman, goes after him alone.

In St. Louis, a mustached man meets an apparent prostitute, but as they get busy in a restroom, a mysterious figure activates Black Canary’s ultrasonic song through the man’s comms, flashes a light to temporarily stun, and attaches a neural inhibitor to the man’s spine, revealing him to be Simon Baz, the Green Lantern. Batman’s “I go alone” turned out to have been a ruse to trick the impostor Batman, who tells the incapacitated hero that Batman apparently knew the impostor was listening to the League’s communications. Dressed in a Batman costume but smoking a cigarette, the impostor announces that he’s the League’s biggest fan.

Analysis: After a slight lull last issue, Christopher Priest returns the tension in his first Justice League arc up. As a result, this issue is full of Priest’s trademark dark, complex plotting. In addition to his focus on Batman’s increasingly disrupted ability to lead the League in their politically and morally high-stakes job, he gives small moments to every member, from Aquaman’s outraged royalty, to the struggle of the new member Green Lanterns to find their place among veterans with unimaginable experience. These little details really flesh out each character in a book packed with so many characters, and it is to Priest’s credit, along with artist Pete Woods, that each character makes a solid impression, and seems to have their own lives beyond the immediate action of the submarine rescue that is the centerpiece of the book’s problem of the week.

Pete Woods, still doing a monumentally impressive task of pencils, inks, and colors, continues to provide top-notch artwork for this incredibly complicated story. He gives some really beautiful splashes and oversized panels, such as the impostor Batman’s murder of the congresswoman, and the following shot of Nightwing training with Batman. All of the characters look fantastic, from Superman’s optimistic and kind, but still incredibly full of years and experience, to Aquaman’s bearded gruffness, to Diana’s complex intelligence and beauty contrasted with Jessica Cruz’s youthful indecision. Though obviously Woods cannot complete every single issue of a twice-a-month comic, it’s a sign of well editorial has planned out this first arc that Woods was able to finish at least the first half of this pivotal arc. It looks like three different artists will handle the other three issues of this arc, but Woods is scheduled to return, a welcome sign for those who appreciate his bold, cartoony but assured renditions of our favorite super-team.

Priest also keeps the sense of a deeply complex workplace drama – showing all of the members of the League with lives and activities and interests outside just being their costumed selves. Batman trains with his sons, Superman and Green Lantern have lunch, Diana has her mission to Man’s world, Aquaman his kingdom and exile, giving a real sense of depth to this world in only three issues. While the submarine crisis is ultimately resolved reasonably easily through diplomacy, the way the League conflicts and shows their experience in this matter really hits home how commonplace the use of godlike powers are, while the political and popular blowback give us a sense of how viciously intense the pressures tearing Batman in half are. Furthermore, since Priest has spent the last year and a half developing his own little corner of the DC Universe in the Deathstroke title, in which he’s handled Batman and Superman before facing off against the world’s deadliest assassin, it’s a delight to see the little bits of crossover like Representative Hasgrove show up, showing that this is a bigger world than just these twenty pages every two weeks.

Final Thoughts: The League’s troubles increase as their hidden antagonist reveals himself.