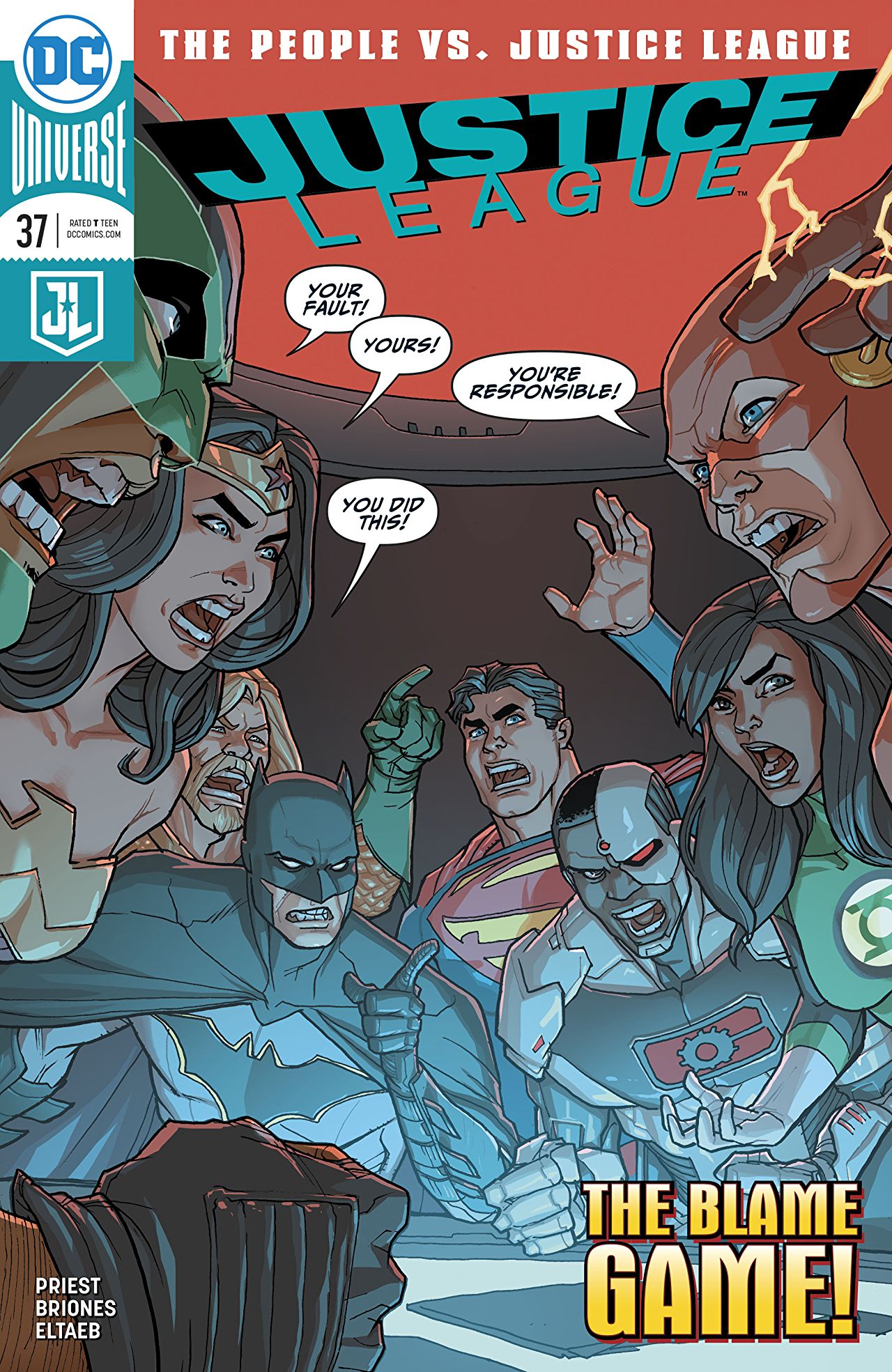 Overview: The Justice League discovers that their greatest threat comes not from an enemy, but from an overzealous fan.

Synopsis (spoilers ahead): As television news stories continue to air about the Justice League and their troubles, we see a previously recorded interview between the murdered Senator Hasgrove and Superman, in which Superman defends the use of secret identities by the League. We then see a flashback of the League fighting various threats as the Fan from last issue narrates his motivations for what he does. We see the younger Fan watching the League with his own Green Lantern-style ring, but is hit by falling debris, and forces himself through rehabilitation and then some sort of military service. In the present, he exercises by tying household appliances to himself and doing crunches while hanging out of the window. We realize he’s monologuing to the captured Simon Baz, Green Lantern, who is incapacitated by an implanted neural disruptor. Jessica Cruz, Green Lantern, and Batman discuss Simon’s predicament, with Batman pulling a patented misdirect on his teammate by appearing behind her.

Meanwhile, on another television, a blonde lawyer argues in favor of the League’s mission and policies.

Jessica walks into the bar where Simon disappeared, finds a note saying “Hello Jessica,” and the building explodes. She survives with her force field, as she and Batman knew it was a trap of some sort, and her ring detects Simon’s DNA in the room.

The Fan dresses as a Green Lantern, calling Simon a bogus Lantern, and leaves to “take care of business.”

At the Watchtower, Cyborg realizes that the Fan has infiltrated the Watchtower based on several technological designs that match the information sent him by Batman. He disconnects the normal comms and teleports a satellite phone to Batman to keep in touch. The Flash does quick checks for sabotage or other malicious effects from the Fan’s visit.

With the Fan gone, Simon breaks a chair leg and punches himself to break through the neural inhibitor, then pulls the inhibitor out of his neck. He discovers that the inhibitor was preventing him from realizing his ring was still on his hand. He instantly suits up and contacts Jessica with the news that the Fan is trying to kill critics of the League. But the League has already realized this, and as the Fan attacks the television interviewer who is arguing with the blonde lawyer, the lawyer reveals that she is actually Wonder Woman, guarding her critic’s life. The critic himself turns out to be Aquaman in a mask, and the rest of the League teleports in. Simon punches the Fan and speculates that he has Lantern imitation technology. Batman reveals that the Fan is Joshua A. Christian, a tech who helped assembled the Watchtower. The League quickly subdues Christian, but realize he knows all of their secret identities. While they argue about what to do with him, he activates the League’s teleporter, yanking them all far away from him.

Analysis: For two years now, Christopher Priest has written Deathstroke as an incredibly twisty, equally plot and character driven tale with elements that setup payoffs that don’t occur for years, and other thematic threads that recur intelligently, building a network of story threads forming a beautiful tapestry of tragedy, humor, and heartbreak. It looks like he’s working on an accelerated timescale with Justice League, appropriate with the much higher visibility of the JL title. In this issue, he pays off many hidden plot elements layered into the last three issues, and continues to offer important moments for all seven of the League’s characters. Though one hopes that Priest gets at least as long as he’s had on Deathstroke to write the World’s Finest heroes, he’s using his time well, writing complicated stories that don’t take the reader for granted.

Artist Pete Woods has penciled, inked, and colored the last three issues solo. Here, French artist Philippe Briones, previously seen as one of the main artists for the Rebirth Aquaman series, provides artwork, with colors by veteran Gabe Eltaeb. Briones is clearly not Woods, edging more towards a Jim Lee design for his characters than Woods’s more cartoony appeal, but his style doesn’t seem to jar too much from the established tone for the series. Hopefully, the other two fill-in artists will similarly blend with the Woods’s style until he comes back.

Final Thoughts: The complex plots begin to pay off as the League acts proactively against their stalker, only to discover he’s still one step ahead of them.