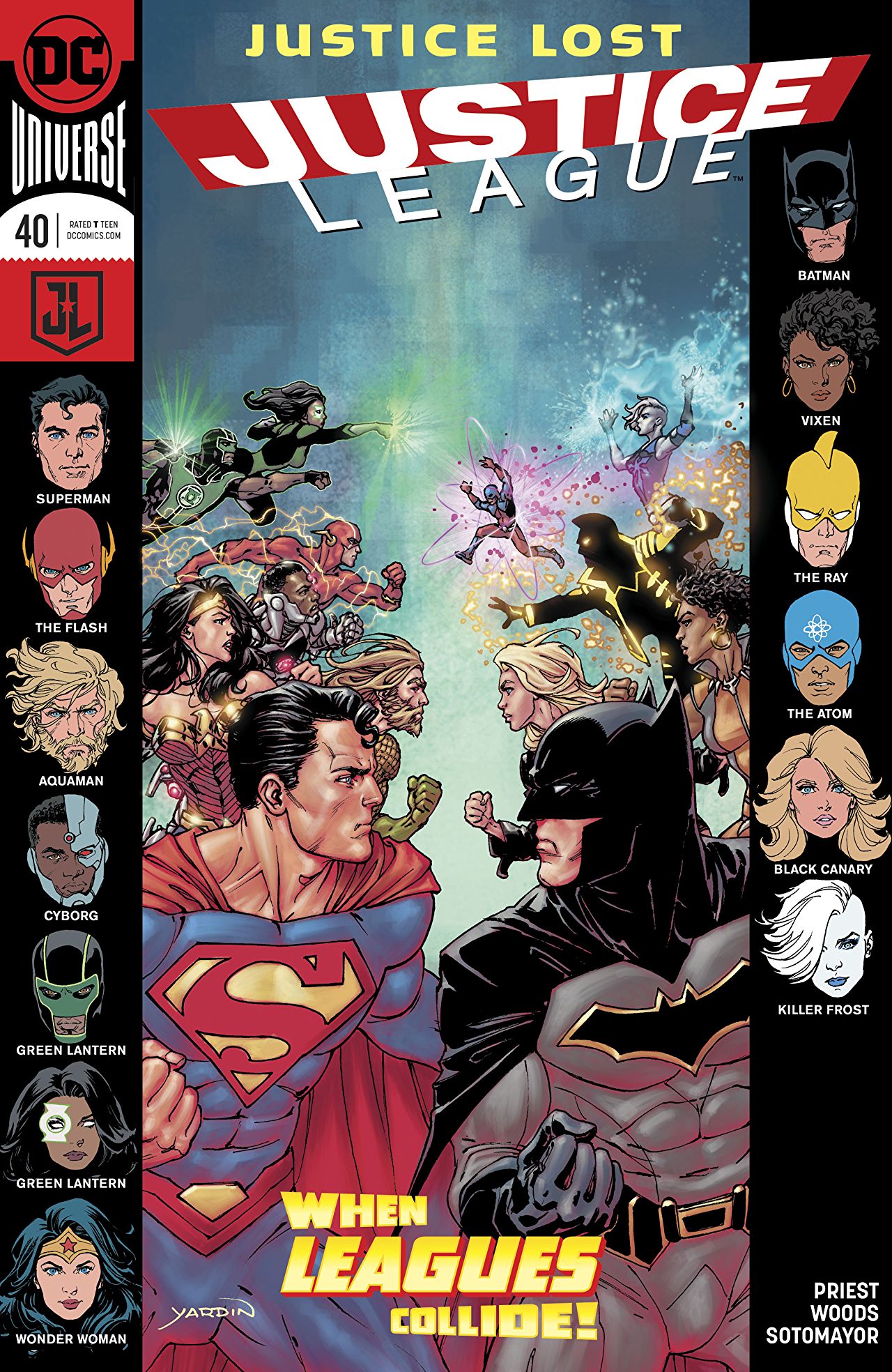 Overview: As their actions continue to cause social conflict on Earth, the Justice League faces death in space!

Synopsis (spoilers ahead): Cyborg teleports to Earth from the Watchtower, where he meets the Justice League of America. The Fan has rigged the transporter to alter Cyborg’s appearance to the Fan’s preferred “model,” which Victor notes with irritation but quickly moves to take command of the disaster of the chemical fire caused by a train accident. The Ray catches Cyborg up to speed – the JLA and League had to deal with the north side of the accident first, but that led to the appearance of helping the rich instead of the poor. Superman advises Cyborg to pull the teams out so the first responders can help without superheroes in the way. Batman tells the group that the JLA is leaving because he agrees with Superman, but Flash argues that he’s undermining Cyborg’s leadership.

Meanwhile, on the Watchtower, Aquaman finds the lawyer from the last issue sabotaging the satellite. She tells him she’s allied with the Fan, and their plan is to destroy the Watchtower because it’s wasteful, and destroy Batman’s JLA along the way because they’re not the “true” Justice League. As both Leagues teleport to the dying space station, the argument continues, but quickly grinds to a halt as the Flash notices the station heating up as its orbit decays. Lobo immediately abandons the team, as Ray tries to fill in for the missing Green Lanterns. Cyborg faces the continued hostility of his teammates and Batman’s team as he tries to find a solution.

On television, a huckster named Brett calls for a class action lawsuit against the Justice League, as legislators in Washington DC try to find a way to spin the situation to their advantage.

Killer Frost, going by the less villainous name of “Frost,” offers some measure of help in her power to reroute the heat of re-entry, but she also voices strong complaints that the “big guns” of the “real” Justice League will survive, while the tertiary members will likely die. Superman, flying around the station with the Ray trying to help, also lends his voice, trying to convince the “B team” that their feelings of inferiority do not mean that the “A team” plans to sacrifice them or thinks of them as less important. Victor takes command, forming a huge plan and using every team member to implement it. Canary and Aquaman burst the station’s hydroponics through the hull, creating a huge water mass, which Frost manipulates to form an ice shield to complement Ray’s light construct shield to help save the station as Cyborg rebuilds the thrusters (the Atom serving as a physical anti-virus system against the Fan’s leftover malware). All of their efforts seem to be working, but the whole station has become a massive glowing read chunk of metal surrounded by ice and plummeting towards the earth.

Analysis: Christopher Priest and Pete Woods reunite after several issues of a fill-in artist as the last part of this run on Justice League begins. It’s really nice seeing Woods’ strong, simplified, and appealing linework and excellent coloring. The fill-in artists were all high quality (thankfully, none of DC’s less appealing stable were called upon), but it’s really excellent seeing Woods’s work again. His rendering of the massive cast of characters and the titanically huge catastrophe on the Watchtower are fantastic and provide a huge propulsion to Priest’s masterful blending of interpersonal conflict and high stakes peril.

Though the first half of the issue deals with the “real life” concerns that are the thematic core of this arc – the political and social consequences of the League’s actions, their public relations negotiations, and the workplace drama – the second half is pure Justice League science fiction threat. Priest writes an excellent Cyborg – taking up the same themes of the Dark Knights: Metal crossover Bats Out of Hell that immediately preceded, with Cyborg playing the quarterback of the League, calling the plays – but much more intelligently. Instead of warm fuzzy feelings about every team member, Priest writes a very specific threat they have to deal with as they all work together to battle impending incineration. Each team members has a distinctive voice and role to play, an incredibly impressive feat given the blending of two teams. Though the entire Batman/Jessica Cruz plot thread that was so awkwardly dropped two issues ago still rankles as completely unnecessary if it wasn’t going to be an ongoing character and relationship issue (since the Lanterns were both written out of the book to give them to the Metal eventin the last issue – which makes zero sense, since ALL of the League is involved in Metal, so this story can’t be that directly tied to Metal’s timeline), Priest does an excellent job with the dialogue and structure of the book. It doesn’t feel like it’s going to change anyone’s perceptions of the characters, but it’s a masterful old-school adventure with some real-world social commentary.

Final Thoughts: The League kicks into high gear as their entire world plunges into chaos.