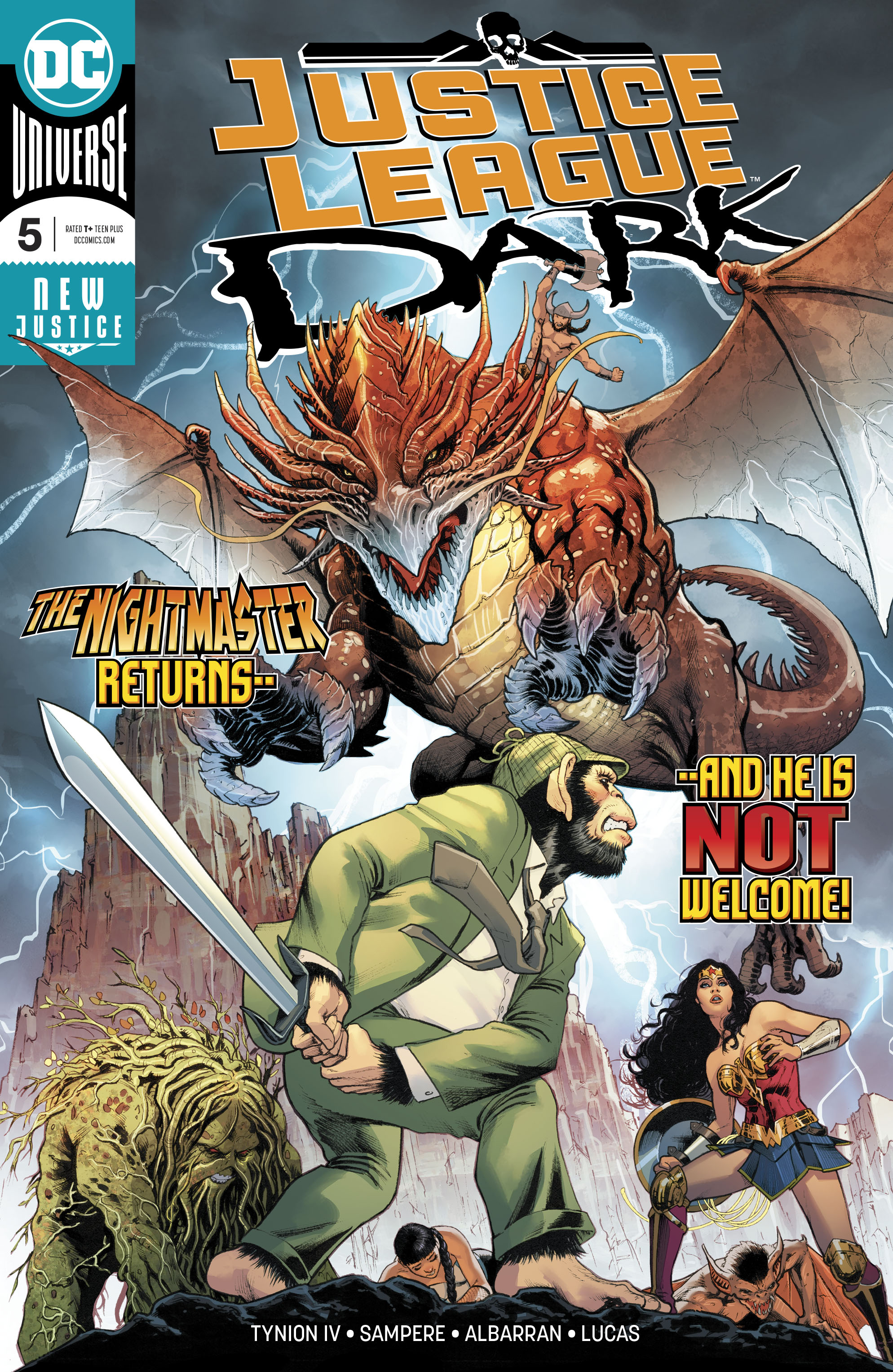 Overview: Constantine and Swamp Thing challenge Dr. Fate, the rest of the team goes to Myrra, and a Stranger appears.

The Nightmaster wielded the Sword of Night, and with it, he was the protector of a magical realm called Myrra. He died saving Earth’s heroes, giving them a way to escape before the cosmic nightmare destroyed them.

Detective Chimp stands over his body, struck with grief over his friend’s death. Rook’s funeral was held at The Oblivion Bar, and his friends came from far away to grieve. After the official ceremonies, everyone stood around telling tales of their late friend. The Chimp chose not to join; instead, the only friend he saw was the bottom of his glass — maybe drinking can help the pain.

He drank and drank until someone drops off Rook’s old sword. Seeing the Phantom Stranger drop it off, he knew Rook wanted him to protect Myrra by becoming the new Nightmaster.

Presently, the Justice League Dark regrouped in the Oblivion Bar from their involvement in the Witching Hour. Zatanna chastises Detective Chimp for drinking and not working. Because of Hecate, many magic wielders died in his bar. Detective Chimp lets it be known they have done a lot of work — blood is no longer on the floor. Traci comments she — the witch bartender he barely pays — is doing all the work of removing her friends off the wall. Diana goes over and hugs Traci, telling her all will be okay.

Detective Chimp asks Zatanna and Diana why they came to the bar. Zatanna says they need his help. Diana tells him that the Otherkind are devouring Olympus as we speak. The veil between our world and them is thinner by the day. Swamp Thing and Constantine are dealing with an issue at the Tree of Wonder. Constantine did say there was something on Myrra they could use in their fight against the Otherkind. Detective Chimp bluntly tells her noZatannana comments how he helped all those people in Nanda Parbat escape to Myrra. He retorts he only took them through the outer edges of the continent. It is not safe for him, or anyone, to go to Myrra. He tells her the Sword of Night is magically bounded to him, and he is not going to help them slice into that reality.

Zatana picks up the sword stating she learned to trick the bond of an enchanted object when she was eight without magic. She slices a tear through reality, amidst the concerns of the Chimp. At that moment, Diana, Zatana, and Man-Bat crossover into Myrra, and Detective Chimp follows reluctantly.

Constantine lights a cigarette and tells Dr. Fate to show himself (Remember, Nabu took over Kent Nelson’s body). Nabu tells him he told Constantine’s friends how foolish an endeavor would be to go against Dr. Fate. In fact, he sensed Constantine’s friends leave this world. How on earth can he and Swamp Thing mount an offensive? Nabu tells them it would take a magical power far beyond what either of them possess to pose a true threat. Swamp Thing attacks Nabu. Nabu tells him this course of action is unwise.

In Myrra, Detective Chimp joins Diana, Zatanna, and Man-Bat. He asks for his sword back — because things are going to turn south really quick. A little while ago, he got himself in a little bit of trouble. He was in a bad place, and he did something he was not so proud of. Zatanna asks what did he do, and he responds he broke Myrra. This place is not what it used to be.

Suddenly, a dragon flies toward them, and an army of skeletons rush to attack. Diana takes the dragon, and the rest of the team deal with the skeletons. Out of nowhere, arrows fly through the air striking the dead army. Men with horses ride toward the team, and a blue skinned horned man shows himself. This man was a beloved friend of the mighty original Nightmaster. He even attended the funeral along with Detective Chimp, and at one time, they were friends as well. The blue man tells the Chimp they had a pact, and it is time he pays for breaking it. Detective Chimp gets a flask from his coat, and takes a drink.

Back at the Tree of Wonder, Constantine and Swamp Thing are no match for Fate. Fate shares he has faced the dark corners of the multiverse for millennia. He has seen the world broken apart molecule by molecule and reassembled it himself. A con artist and tree man have no chance against him. Out of nowhere, a voice states “Enough.” Coming beside Nabu, the Phantom Stranger states he believes it was their plan to catch the attention of the higher powers of magic. And they have their attention, so does Nabu. He tells Nabu, “It is time the two of us talked.”

Analysis: After big events, writers’ follow up stories are usually pretty lame. And it might not be the story itself, but the high contrast between a big event and a small story. The expectations are skewed. And it takes a few weeks for people to readjust to the new status quo. However, James Tynion IV did not write a dud. This issue is amazing!

I am incredibly impressed with each issue. This book is my favorite out of the entire DC line. And this is weird, because I hate magic. I hate magic in movies and books. Yet, I am drawn to this title. A good writer is able to bring in those who are not interested in the story. And, the art enhances an already enchanting story. This book is so good.

Now, I like how Tynion focused more on the past of Detective Chimp. I wonder what he did to break Myrra.

Yeah, there was no way Constantine and Swamp Thing could possibly win. The appearance of the Phantom Stranger totally threw me for a loop. I am curious how The Stranger relates to Nabu, the Lords of Order, and the hierarchy of magic itself.

Final Thoughts: The Phantom Stranger vs Dr. Fate. That is a fight I am dying to see!