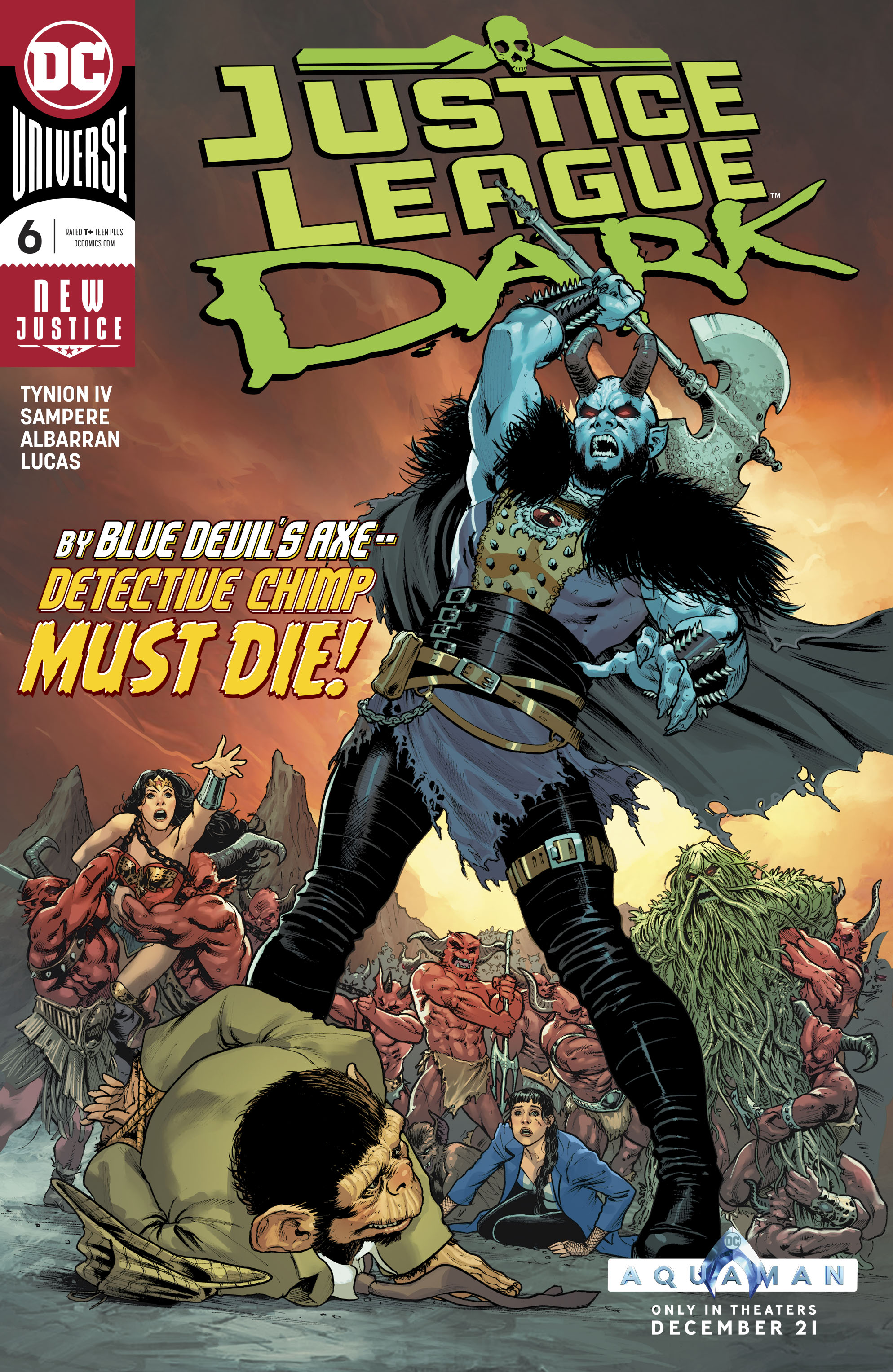 Synopsis (spoilers ahead): Dan, the Blue Devil, informs the Justice League Dark why Myrra is in its current state. For months, skeleton hordes rise from the Earth at night. Thus, all the citizens have moved inside the walls of the capital. To protect the capital, Dan and his team go into the fields at daybreak to reduce the number of skeletons. But, they never truly die.

Zatanna asks Dan how he is doing. Dan says he is not that good. He is putting on a brave face for the citizens, but he is at his end. He is no hero like the Justice League. His life has turned upside down because of Detective Chimp. Zatanna asks what he possibly could have done. Dan says he did not do anything, and it is the reason Myrra is what it is.

Detective Chimp stands in front of Jim’s statue, apologizing for his actions. He apologizes for breaking his magical land. He “feels” Jim’s disapproval from the afterlife. Coming back here and seeing the results of his actions cause him to want a drink.

Back at the Tree of Wonder, the Phantom Stranger confronts Nabu over his relationship with the Otherkind. He felt this magical crisis coming and thought Nabu would be on his side. Nabu tells him they invited this crisis when they brought the dark fire of magic to this world. They destabilized the order of things, and the only way to achieve stabilization is to remove the plague of magic from Earth.

Swamp Thing asks Constantine what they can do now. Constantine tells him the Stranger has walked all the Earth as long as there has been an Earth. He is one of the most powerful beings in existence. There are few who can rival his power, and unfortunately, Nabu is one of them. All they can do is watch.

Dan tells the League he offered to stabilize things in Myrra after Jim died. It would allow Detective Chimp time to grieve before he assumes the role of protector. But, Detective Chimp drank more. When Myrra needed him to be their hero, he hid in a bottle. He brought a spellbook into Myrra, and it is the source of their problems. Due to the nature of Myrra being a magical construct, it is more sensitive to the usage of magic compared to Earth. The spell Detective Chimp tried was a spell to bring Jim back from the dead. But, death does not function the same in Myrra. He broke one of the fundamental laws of magic — he broke death itself. Zatanna tells Dan she could possibly reverse this mess, but she needs his mages’ help. They tell her the only way to reverse this is to kill Detective Chimp.

Diana goes to see Detective Chimp in his cell. She tells him he needed to tell them what he had done. He responds that people who post up in a bar each night all have their problems. She tells him Dan’s magicians want to kill him, and they are trying to find another way. Detective Chimp asks why they should stop them. If he dies, the Sword of Night would pass to Dan. Myrra would have a true hero.

Diana says she knows how he feels. She can barely look Swamp Thing in the eyes knowing what the Witchmark did to the Parliament of Trees. She knows what it feels like to be overwhelmed. But it is just a feeling. A few weeks ago, they were all faced with a magical crisis and he was strong at that moment. She says he wants people to live and be the man Jim knew he could be. She hands him a flask of mead and breaks him out of his cell. He will fix what he broke.

The Stranger and Nabu have always been on the same side; thus, no reason for them to ever fight. To avoid chaos, Nabu chooses to imprison the Stranger inside his helmet. The Stranger yells for Constantine and Swamp Thing to flee.

Zatanna is looking through a big collection of spellbooks to find a way to undo this mess. However, she has next to no progress. Detective Chimp offers to help her. Dan protests and says the Chimp has done enough. Detective Chimp replies they are in this mess because he did not do enough. One of Dan’s officers yells the skeleton army is at their gates. Diana tells them she and Dan will go hold them off while Zatanna and Detective Chimp figure out a solution to Myrra’s problems.

With the Phantom Stranger gone, Constantine tells Swamp Thing to get out of there. Nabu is about to open an entrance to Olympus. The Otherkind are almost here. The team needs to come to the Tree of Wonder and hold the line. Constantine is going to do what he can to hold them off, but Swamp Things needs to get the team here.

Zatanna and Detective Chimp find a way to reverse things and save Myrra. The skeleton army has been defeated, and death has been restored.

The team heads back to the Oblivion Bar, and immediately Zatanna’s arm is bleeding. She realizes it is a message from Constantine. He tells her to find “Mordru.” Swamp Thing appears and tells them all Constantine has died and the Otherkind are here. The war has started.

Analysis: This is another great issue by Tynion and co. I am so glad Tynion only did a two-issue arc for this story. It was enough to keep me engaged, but it also does not drag out too long.

Nabu defeated the Phantom Stranger. I was not expecting that. Also, how can Nabu trap people in his helmet?

Constantine is now dead. For a two-bit con artist, he is a true hero. He did all he could to save magic, but it was not enough.

Mordru is the most prominent lord in the Lords of Chaos. He should be able to give Nabu a run for his money.

I loved the art. The panels where Nabu is trapping the Stranger and Constantine are pretty cool. I am really impressed with the colors.

Final Thoughts: This is a great issue with a few unexpected twists. Will Mordru be enough to oppose Nabu, or will he suffer the same as the Stranger?