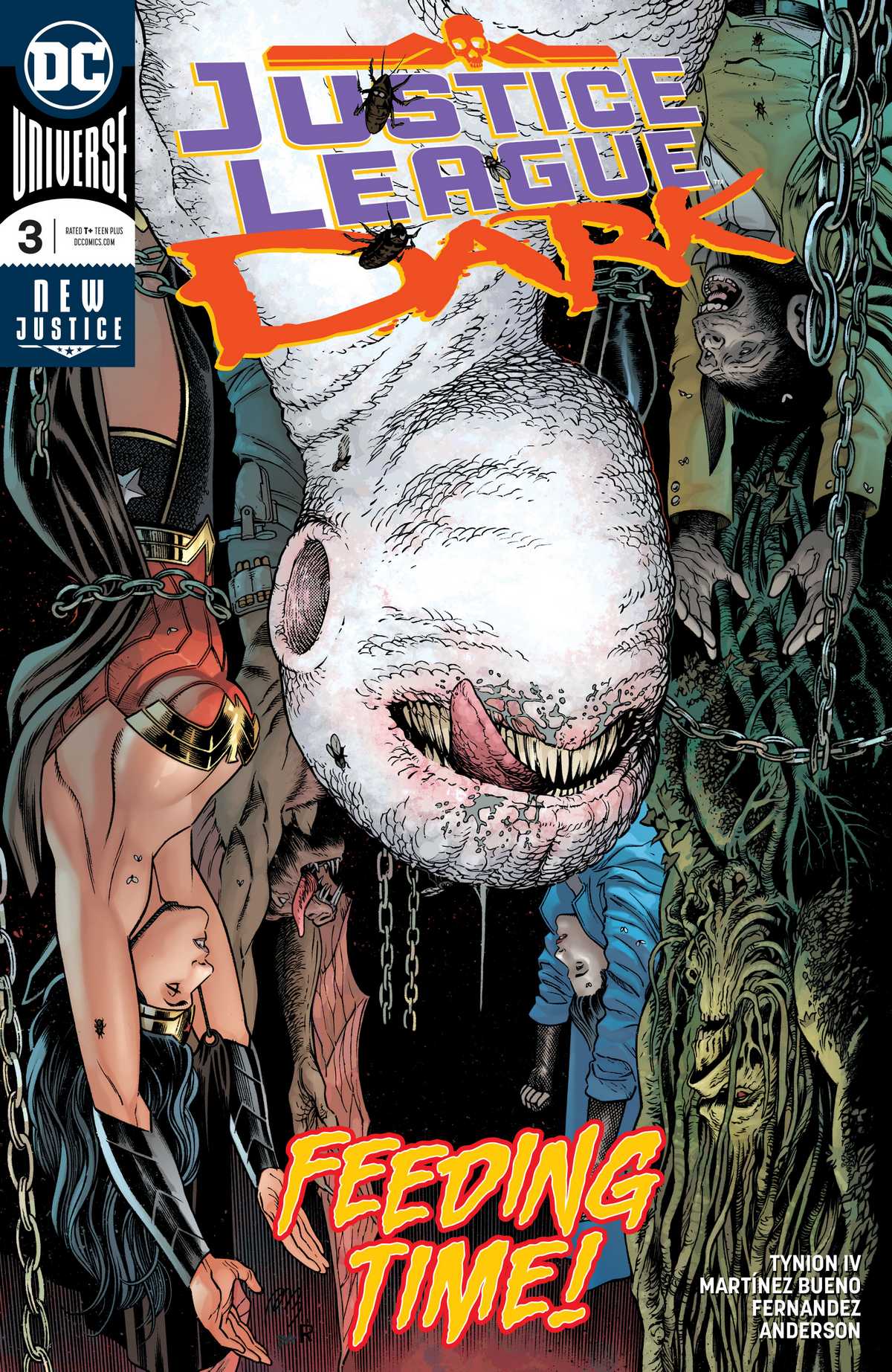 Overview: The Upside-Down Man claims what is rightfully theirs.

Synopsis (spoilers ahead): In a flashback, Zatara awoke Zatanna at five in the morning to start her training with the simple words “Teg Pu.” She would get up as if it were magic. Her father would have her escaping straitjackets or counting cards. And, his directions were only given backward. Once she has mastered her daily task, he would take away the lock picks and the sleight of hand. She could only use magic. Day-by-day, she learned how to use magic by speaking words backward.

One night, Zatanna asks her father why they always have to say the words backward. He tells her they are able to access magic and use its power. But, energy must come from and go somewhere. Their family uses backward language to harness this power while others might use totems. This is all sleight of hand so that they might not see what they do.

Presently at the Tower of Fate, purple lightning strikes the top of the Tower. This energy came from the Otherplace. A being steps forth and Diana meets him before he can take a step. He introduces himself as the Upside-Down Man. He apologies for his appearance, he is not accustomed to having an individual form.

He chastises humanity for stealing magic from their realm. He accuses them of taking it to make the world a little wilder, but this failed. Zatanna asks him who he is, and he states “We are horror itself.”

The Upside-Down Man says to Zatanna, “You stole from us [magic], and now we will punish you for it. You and your entire world.” Zatanna uses the spell “Og Yawa” to make him go away, but he stands unaffected. He simply responds they have enjoyed playing with her father all these years. As they were taking him apart and reforming him, he would scream “Esaeler Em!” He tells her she can join her father if she wishes. Before he is able to consume her, Diana blocks his attempt.

He asks Diana what she is. She goes on to state who she is and her titles in this world. He corrects her because she did not answer the question. He says, “I don’t care who you are. I want to know what you are. There is something strange inside of you…something I do not understand. How very curious, it’s a font of power, and if I turn it on…” As he touches her forehead to turn on this power, a bright light engulfs Diana and she is imbued with powerful magic. Zatanna helps Diana control it and banishes the Upside-Down Man from Earth. Before he leaves, he tells them they will be back.

Zatanna tells the team in all of her years of study, she has never seen power like this. This is only the beginning.

Analysis: Wow, this issue was awesome. This issue is the perfect conclusion to a strong arc. When Tynion announced he was going to create a villain for Justice League Dark, I was a bit skeptical. Creators creating characters just for the sake of it is lame. Why not use the plethora of DC characters in their catalog instead of creating new ones? (Scott Snyder seems to be playing with all the long, forgotten characters though. Check out his Justice League run.) Tynion’s Upside-Down Man is not a letdown. He writes him well, and creepy! I really like the Upside-Down Man.

The biggest curveball in this entire story is not when Diana becomes Super Saiyan, but the reveal the Upside-Down Man has Zatanna’s father. I was not expecting that. It was believed he died a long time ago, and Zatanna has taken his place. But if he is still alive and if the JLD can save him, then there will be a lot of interesting stories to tell.

I love how Tynion explained why Zatanna and Zatara used backward words when they harness magic. I will now omit this from my “Unanswered questions about the DC Universe” list.

The art in this series is absolutely perfect. Alvaro Martinez Bueno is one of my favorite pencils in all of DC. Raul Fernandez (inks) and Brad Anderson (colors) transformed his great art into a beautiful comic book. With a book that delves into magic, you need an amazing creative team that can draw all the craziness Tynion writes.

Side Note: Anytime the Upside-Down man talked about himself in the plural tense, all I could think of were the Venom trailers. Venom says, “We will eat both of your arms, and then both of your legs, and then we will eat your face right off your head.” I totally see the Upside-Down Man saying the same thing. People who talk about themselves in the plural tense are creepy!

Final Thoughts: Justice League Dark is definitely worth it. This story is only going to get better as time moves along. Jump on the bandwagon now before it is too late!