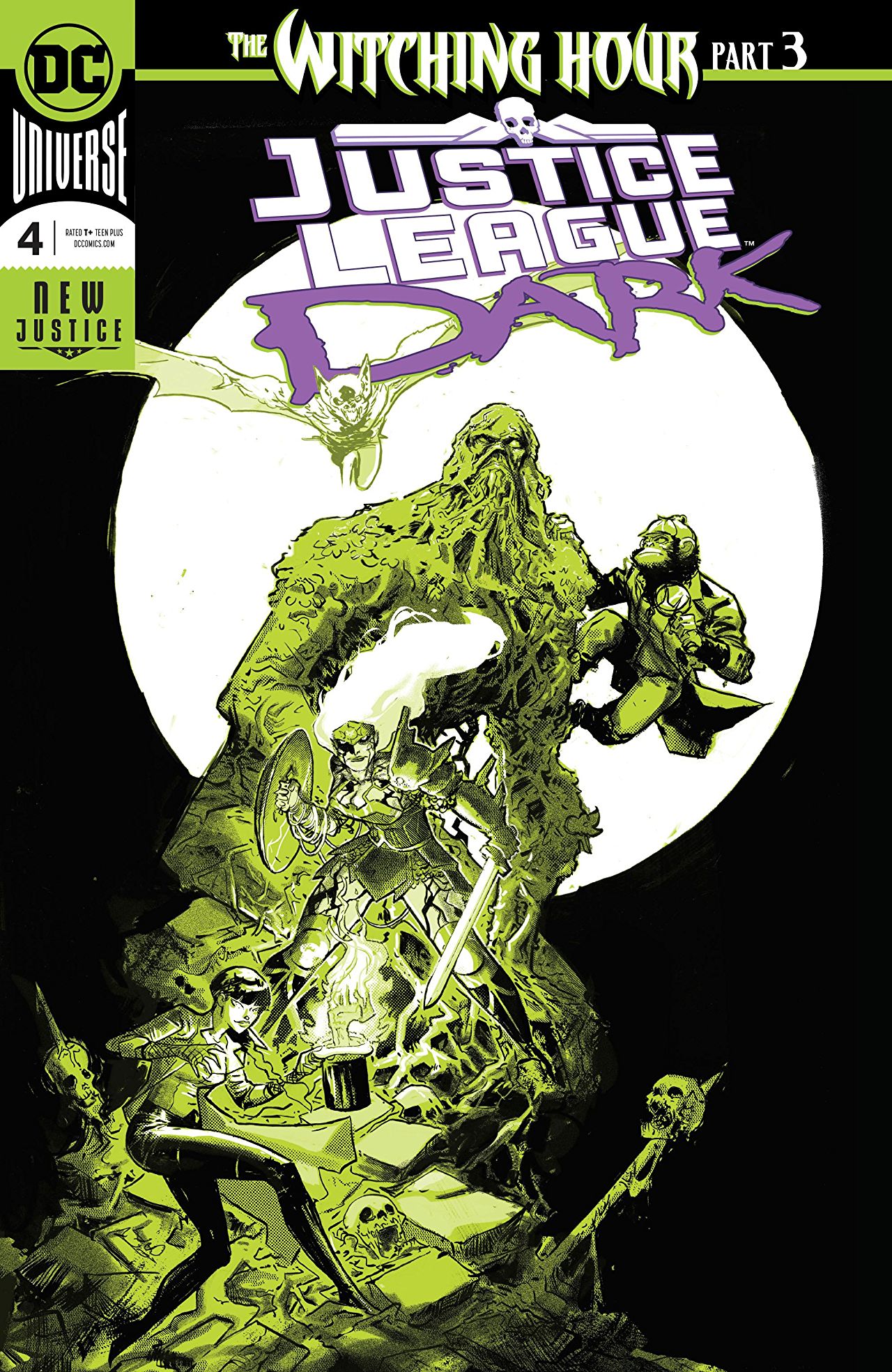 Overview: With Circe’s help, Diana and the team confront Hecate in Nanda Parbat.

Editor’s Note: Justice League Dark #4 continues the Witching Hour crossover. Last week Wonder Woman #56 released which was the next part of the story. We did not review the issue individually so please find a brief synopsis of what happened in that issue so Justice League Dark makes sense.

Wonder Woman #56: Diana and the JLD head to Aeaea to meet with Circe, one of Diana’s most formidable adversaries. When Diana says her name, Circe appears with pomp and circumstance, threatening to kill each member of the group. When Diana lifts her tiara to reveal the witchmark, Circe transforms into a more…mortal look. She apologizes for the theatrics, but there is no time for such things – the Witching Hour has begun. She gives Diana a hug and tells her it will get worse from here.

Circe states Hecate existed before the gods first walked the earth. She is the symbol of mankind’s great collective unconscious. When the first magicians stole magic for themselves, they allowed a darkness to slowly infect the world. To protect herself from this darkness, Hecate split her power into five parts and imbued it in others via her witchmark.

Despite Zatanna’s worries, Diana asks for Circe’s help in controlling this newfound power. Zatanna knows Circe will take advantage of her, but Diana does not care about the danger. At that moment, Boston Brand – Deadman – appears and alerts the team Hecate is destroying Nanda Parbat.

Justice League Dark #4: With the flick of her wrist, Diana opens a portal to Nanda Parbat.

Because of the activated witchmark, Manitou Dawn is easily burning this mystical city to the ground. Underneath the witchmark, she screamed. She shouted every command she knew to take back control of her body. She pleaded with the monks of the city to run because she was about to kill them all. The witchmark gave Hecate control of Manitou’s body, and Hecate would not be diverted from her goal.

Rama Kushna appears and asks Hecate what her purpose is. Rama Kushna has never meddled in her affairs. Rama Kushna’s sole purpose is to guard the boundaries between death and life. Hecate tells her humanity is at the precipice of destruction. Magic is now a liability, and she will replace it with something better.

Diana confronts Hecate and Manitou Dawn and commands Hecate to stop this destruction. In response, she, as Manitou, attacks Diana. With the great power between them, the reality is starting to crumble. Detective Chimp uses the sword of Night to create an escape. Everyone leaves except Diana, Zatanna, and John Constantine.

Hecate tells Diana it is pointless to fight her; she will destroy magic. She also shares Diana is not the only one who has an activated witchmark; Hecate is fulfilling her mission in other locations simultaneously. One of the other havens of magic is the Parliament of Trees.

In anger, Diana punches Hecate but instead is engulfed in an explosion. Zatanna calls out to her to make sure she is okay, but when the smoke clears, she can clearly see Hecate has total control of Diana.

Analysis: Between the last two issues, not much has happened. We learned who Hecate is and what the witchmarks are, but nothing else really. However, the action in JLD #4 is awesome. At the beginning of JLD, there was a great amount of exposition, which is okay at times. But this is comics, there has to be action every now and then!

I find it odd Diana would so easily align herself with Circe, given their history. But, desperate times call for desperate measures I guess.

James Tynion’s writing and Alvaro Martinez Bueno’s art are superb as ever.

Final Thoughts: Overall, I am happy with JLD, and I cannot wait for The Witching Hour part five.