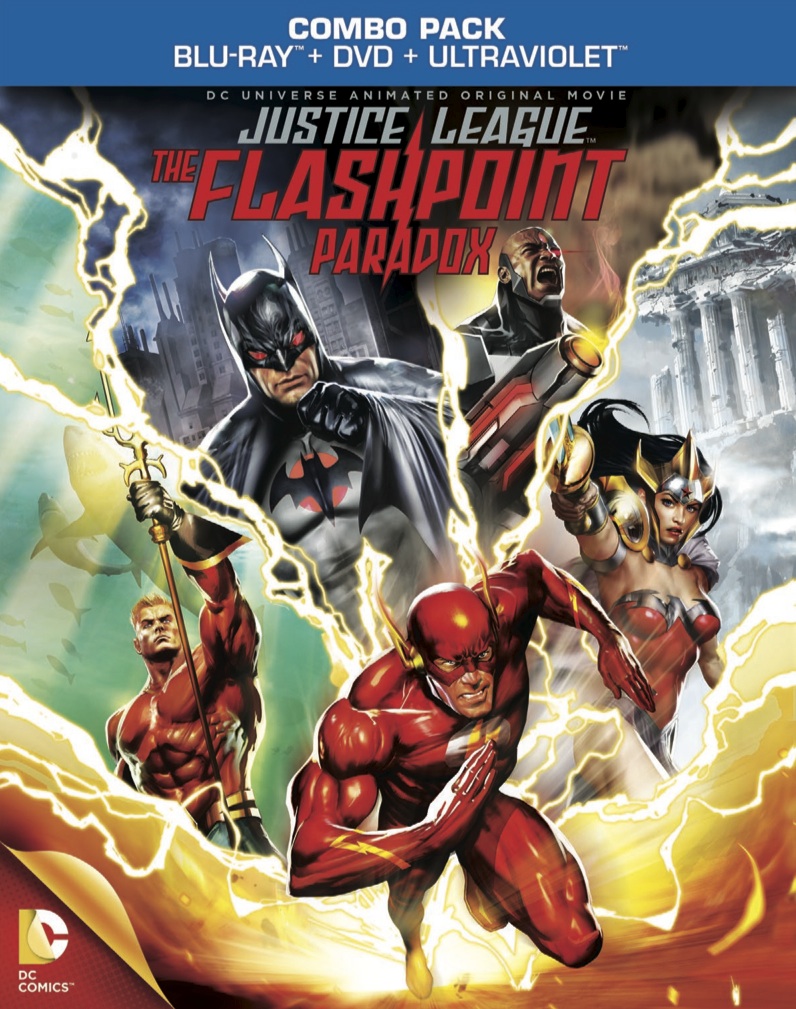 BURBANK, CA (April 17, 2013) – The world is turned upside down as one of earth’s greatest super heroes – Flash – wakes up devoid of his super powers in the all-new Justice League: The Flashpoint Paradox – the next entry in the popular, ongoing series of DC Universe Original Animated Movies. Produced by DC Entertainment and Warner Bros. Animation, this all-new, PG-13 rated film arrives July 30, 2013 from Warner Bros. Home Entertainment on Blu-Ray™ Combo Pack ($24.98 SRP), DVD ($19.98 SRP) and Digital Download. The Blu-ray™ Combo Pack will include UltraViolet™*.

When time travel allows a past wrong to be righted for Flash and his family, the event’s temporal ripples prove disastrous, creating a fractured, alternate reality where the Justice League never formed, and even Superman is nowhere to be found. Amidst a new world being ravaged by a fierce war between Wonder Woman’s Amazons and Aquaman’s Atlanteans, Flash must team with a grittier, more violent Batman and government agent Cyborg to restore the continuity of Flash’s original timeline.

“Justice League: The Flashpoint Paradox has all the elements of another great film – dynamic forceful villains, treacherous twists and turns and internal tensions amongst heroes,” said Mary Ellen Thomas, Warner Home Video Vice President, Family, Animation and Partner Brands Marketing. “Showcasing a cast that brings together some of today’s popular primetime television actors with many fans’ favorite voices from the original series, Warner Bros. Home Entertainment is proud to release this title as the next DC Universe Animated Original Movie.”

Justice League: The Flashpoint Paradox Blu-ray™ has over three hours of exciting extra content, including:

•    A Flash in Time: Are there other dimensions?  Can time travel get us there?  And if The Flash existed, could he really travel through time?  Interviews with experts in mythology, theoretical physics and top DC writers will examine the science and legacy of the storytelling behind the fiction.
•    My Favorite Villians! The Flash Bad Guys: Acclaimed DC Comics writer Geoff Johns and others share their favorite Flash villains in this short film that gives viewers a glimpse into the Flash’s world through the eyes of some of the nefarious characters he has encountered over the past 70 years!
•    A Sneak Peek at the next DC Universe animated movie:. An in-depth look into the next DC Animated feature film, spotlighting the cast and crew.
•    From the DC Comics Vault:  Bonus cartoon episodes
•    The Flashpoint Paradox Audio Commentary

About Warner Bros. Home Entertainment, Inc.:
Warner Bros. Home Entertainment (WBHE) brings together Warner Bros. Entertainment's home video, digital distribution, interactive entertainment, technical operations and anti-piracy businesses in order to maximize current and next-generation distribution scenarios. An industry leader since its inception, WBHE oversees the global distribution of content through packaged goods (Blu-ray Disc and DVD) and digital media in the form of electronic sell-through and video-on-demand via cable, satellite, online and mobile channels, and is a significant developer and publisher for console and online video game titles worldwide. WBHE distributes its product through third party retail partners and licensees, as well as directly to consumers through WBShop.com.

About DC Entertainment:
DC Entertainment, home to iconic brands DC Comics (Superman, Batman, Green Lantern, Wonder Woman, The Flash, etc.), Vertigo (Sandman, Fables, etc.) and MAD, is the creative division charged with strategically integrating across Warner Bros. and Time Warner.  DC Entertainment works in concert with many key Warner Bros. divisions to unleash its stories and characters across all media, including but not limited to film, television, consumer products, home entertainment, and interactive games.  Publishing thousands of comic books, graphic novels and magazines each year, DC Entertainment is the largest English-language publisher of comics in the world.

About Warner Bros. Animation:
Warner Bros. Animation (WBA) is one of the leading producers of animation in the entertainment industry, with an innovative and talent-rich roster boasting some of the most accomplished writers, producers and artists working today. The studio is on the cutting edge of animation technology and has both CG and traditionally animated projects in current production and development. For TV, WBA produces series such as The Looney Tunes Show, MAD and Teen Titans Go!, as well as the forthcoming Beware The Batman,and The Tom and Jerry Show for Cartoon Network. WBA also produces series and additional original content — including animated shorts — for Cartoon Network’s multiplatform branded DC Nation programming block. In addition to TV programming, WBA produces theatrically released CG cartoon shorts featuring iconic Looney Tunes characters, rendered in stereoscopic 3D. WBA also creates the highly successful series of DC Universe Original Animated Movies for DVD. Producing for multiple platforms including TV, digital and home entertainment both domestically and internationally, WBA is highly respected for its creative and technical excellence, as well as for maintaining the Studio’s rich cartoon heritage. It is also the home of the iconic animated characters from the DC Comics, Hanna-Barbera, MGM and Looney Tunes libraries. One of the most-honored animation studios in history, WBA has been honored with six Academy Awards®, 35 Emmy® Awards, the George Foster Peabody Award, an Environmental Media Award, a Parents’ Choice Award, the HUMANITAS Prize, two Prism Awards and 20 Annie Awards (honoring excellence in animation).