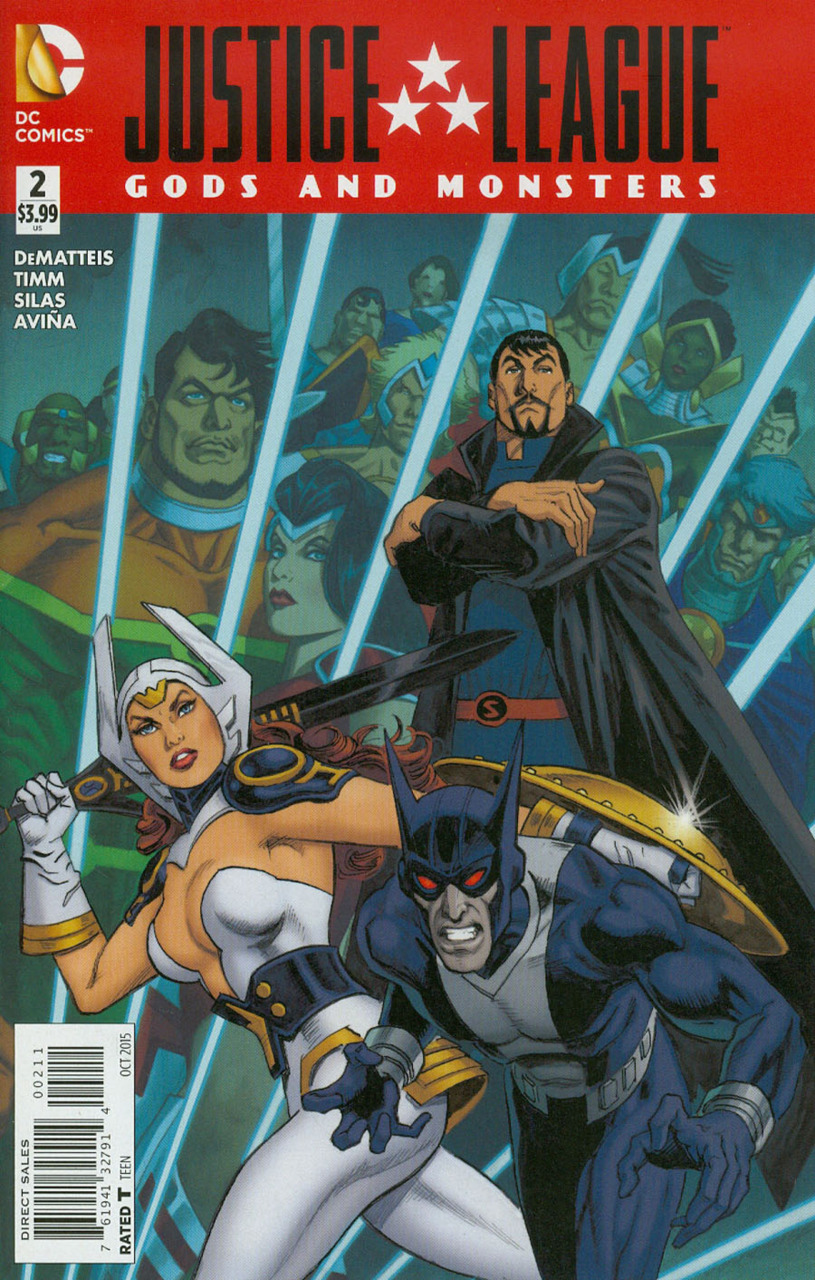 Beginning at Gotham University, Batman visits Doctor Luthor to talk about Alpert Jackson. Batman reveals his identity to Luthor in the hopes that he will remember him from his days as a student. Luthor does not and then the two discuss Jackson and his apparent death over forty years ago. Luthor believes that the Justice League is more of a threat than the Forever People. The two argue about the risk the League poses to the world. Luthor ends their conversation with offering to help cure Langstrom because, unlike Superman and Wonder Woman, he is from Earth.

Back at the Eternity Institute, Wonder Woman breaks the chamber Superman was inside while undergoing the “Forever Process”. Superman becomes enraged and attacks Wonder Woman for interrupting the enhancement process. He then collapses and Wonder Woman takes him back to his room.

At this time, Jackson is with Fastback who is in desperate need of additional upgrading treatment. Jackson warns her that if she does not pay him the millions for another round of the Forever Process, she will die. Fastback then attacks Jackson but suffers from a seizure. We finally get to see the mad scientist in Jackson as he ponders the reasons for his actions.

Outside the institute, Batman is sneaking into the facility but is attacked by drones with the directive to annihilate intruders. The drones shock him and report that he has been “neutralized”.

Back inside the facility, Wonder Woman is sparring with Superman to see how well he is healing from the upgrade process. Jackson appears to inform Superman that his alien physiology is unable to undergo the Forever Process. Alpert offers Superman and Wonder Woman roles as teachers to the new wave of meta-humans transformed by his Forever Process to which they decline.

Wonder Woman takes Superman to another room where we see Batman had escaped the drones and has been hacking into the files of the Eternity Institute for a few days now. Batman reveals that Alpert Jackson died over forty-five years ago but that a C.I.A scientist, Doctor Psycho, took his identity. Wonder Woman confirms that this was an enemy of hers back in 1968 when he was attempting to turn people into monsters. Jackson interrupts and unleashes his monstrous Never People. The three of them are captured and placed into chambers for further analysis.

We get a few panels showing that, over the last few days, the Forever People have spread across the world building their own “fiefdoms”. Back at the institute, Doctor Psycho studies the League and states that he is going through an evolution thanks to Superman’s DNA and his Forever Process. Doctor Psycho is interrupted as Fastback seemingly kills him. She frees the Justice League and is disposing of Doctor Psycho when an electronic voice cuts her off telling her humanity’s time is over.

Over the next few pages we see the newly formed Justice League battle the Forever People and eventually defeat them with Batman’s synthesized “cure” that puts them in comas. The Justice League then transports all of them back to the Eternity Institute to be studied by a team of researchers led by Doctor Slate. Slate tells the League they are just as dangerous as the Forever People and warns them about staying on Earth. The League warns Slate in return.

Outside the Eternity Institute, the Justice League is flying away discussing the absence of Doctor Psycho’s body in the facility when Luthor’s team took over. They are then attacked by an evolved robotic form of Doctor Psycho..Imperiex.

Overall, this issue was not exactly bad but it did not give me the same feeling I had after issue #1. The pacing felt off and I became tired of the Doctor Psycho character. The reveal at the end of him evolving into Imperiex was interesting, but I was really hoping we would be introduced to a new character that was not tied to the Forever People.

With a brand new universe full of potential, the creative team has a great chance of branching off into new areas and turning this into an ongoing series with more characters to explore.

Another shortcoming of this issue was the handling of Batman. I was not happy that he revealed his identity to Luthor which never feels like something he would do. Although, this did connect to the previous issue with Lois Lane’s narration and mentioning Langstrom as Batman. Along with this reveal, Batman realizes it would take too long to inoculate the Forever People with his fangs and announces he can spread the antidote “via batarang!”. This felt too forced and we did not need this explanation since the artwork could have been enough to show how he planned to spread his cure.

Thony Silas did the art so it had the same style as issue #1 with lots of bright coloring to give it that bombastic, action feel. This issue did deliver more action scenes and gave us our first look at the Justice League fighting together.

Despite the reliance on Doctor Psycho’s character and mishandling of Batman, this issue still had some fun moments so we will see how the creative team finishes this prequel arc.