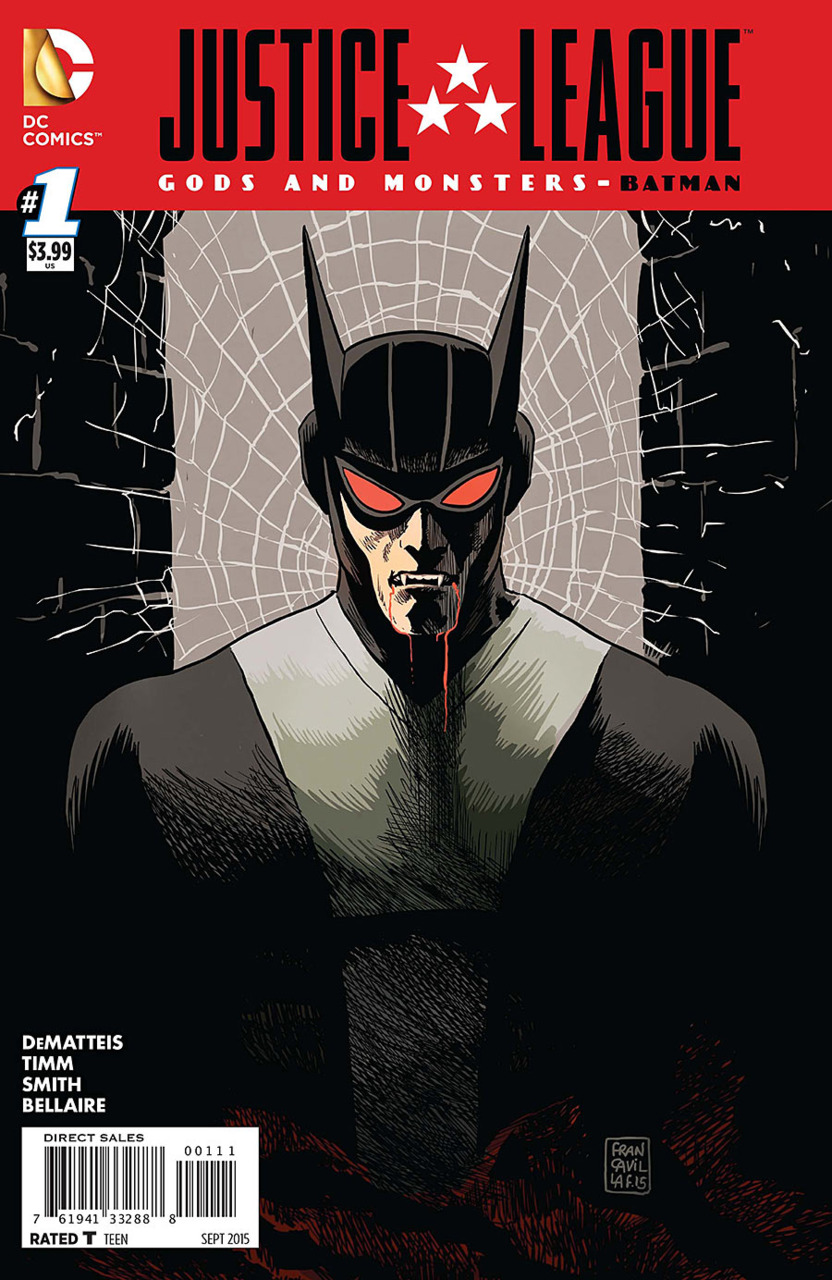 “Justice League Gods and Monsters: Batman Hunger” opens with a man beating his wife. The abusive husband is attacked by a very hungry vampire who quickly kills him. The wife attacks the vampire with a knife and almost gets attacked herself, until the vampire who is Kirk Langstrom sees a reflection of himself in her eye telling us that this is not an ordinary vampire. We learn that Langstrom who was suffering from lymphoma created a cure that truly healed him from the lymphoma but changed him into something else entirely.

We cut to a couple watching television. It is Langstrom’s parents. The father is a mechanic who does not understand the scientist that is his son, however Kirk is rejected by his mother who throws him out of the house with regret. We change scenes to Swifty’s in Ellis, Nebraska. Kirk meets up with his former girlfriend, Francine. They reminisce about old times when Francine’s husband who is a former jock jokes at Kirk’s expense. Langstrom tries to leave but is prevented by the husband, Harv. In a fit of rage Langstrom throws Harv through the window and then looks at Francine, focusing on her neck. Langstrom leaves allowing Francine to check on her husband.

We see Langstrom in his makeshift lab. He is arguing with himself about his vampiric state, especially the growing hunger inside of him. He decides to put on gloves and a ski mask and become a creature of the night, a Batman. We get a montage of Batman attacking the Gotham underworld. He limits his attack to the criminal element.

We meet Lew Moxon and his right hand man Joe Chill. They are on their way to a meeting with the crime families including Rupert Thorne. Moxon is disappointed in Thorne. Thorne has been skimming Moxon’s prostitution profits. He somehow manipulates or coerces Thorne to shoot himself in the head. Moxon and Chill decide to go to another room where they are face to face with the Batman. Batman kills the thugs and Joe Chill and finally kills Moxon himself.

At Moxon’s funeral, Langstrom sees Moxon’s wife, Angela and son, Jeremy. They are both mourning Moxon’s death and it makes Langstrom think about his own family. Angela is a devout Catholic and works heavily in charity work while Jeremy also does not appear to be like his father. He is a student at Yale majoring in biochemistry and literature. Langstrom continues to watch Jeremy while we see the grave of Joseph Chill. Chill leaves his own grave in the dead of night.

Langstrom and Jeremy strike up a friendship. Langstrom feels a need to tell Jeremy about his vampiric condition. The two begin to work together to find a cure. Langstrom does not tell Jeremy everything, he does not reveal that he killed Jeremy’s father. Later the two find the dead body of Angela. Jeremy appears to know who killed her. Langstrom questions Jeremy as to whom. The other families believed that Moxon kept data on them. To send a message, they had Angela killed. Langstrom’s hunger burns again. He sequesters Jeremy to protect him and he goes hunting.

After weeks of investigation, Langstrom learns of the Sovereign. He believes that he is behind Angela’s death. On a raid, Langstrom learns that the Sovereign is really Joe Chill and he was expected. Batman attacks Chill with guns which have no effect. Chill always planned on killing Moxon, but the Batman beat him to it. He had designs on Moxon’s empire. The fight does not go well for Batman, Chill is stronger now. After Chill takes out Batman, he will go after Jeremy Moxon. This enrages Batman who grabs and ax and cuts Chill into pieces presumably killing him again.

Langstrom returns to talk to Jeremy. Langstrom has been studying the remains of Joe Chill. He was able to absorb Langstrom’s Batman antibodies into his system. Unfortunately Langstrom also discovered that Jeremy was a member of Lew Moxon’s corrupt world. Jeremy reveals that he knew all along that Langstrom killed Lew. This revelation drives Langstrom to don the mask of the Batman and kill Jeremy Moxon leaving him alone once again.

I loved this issue. I am a big fan of alternate versions of mainstream characters like in the Elseworlds books and the Tangent line that DC released in the nineties. This version from Bruce Timm is another version of that. Instead of a Bruce Wayne Batman we meet Kirk Langstrom who in order to cure himself of a disease becomes a vampire as a byproduct. It is this that drives him to become a Batman not to avenge a wrong or even really seek justice but to feed on the underworld of Gotham.

It had the perfect vibe of a horror comic, something I do not have a lot of experience with. The art was a perfect blend of moodiness and darkness that brought me into the mood of the story. I was also very happy to see the violence but the in your face gore was not there.

We do not see Langstrom kill the abusive husband. Instead, we see the blood splatter on his wife’s face. The artist does not directly show us Thorne killing himself; instead we see the face of Lew Moxon as Thorn shoots himself in the head. We do not directly see the Batman attack his victims throughout the comic. We do not even directly see Batman dismember Chill in the end. It is shown in shadows with some blood splatter. I believe that now with modern comics, we see violence all too often and I like the subtle, almost Psycho like, hints to the violence we see here. We know what happens; we just do not have to see every gory detail.

I also enjoyed that this story was self contained; we just meet Batman and see what motivates him as well as develop a pathos for this character. We do not see this reality’s versions of Superman and Wonder Woman yet. We do not even see the Batman costume that is depicted on the front cover.

I cannot think of anything I disliked about this issue, I highly recommend it either in digital or print version and I am happy to add it to my collection.