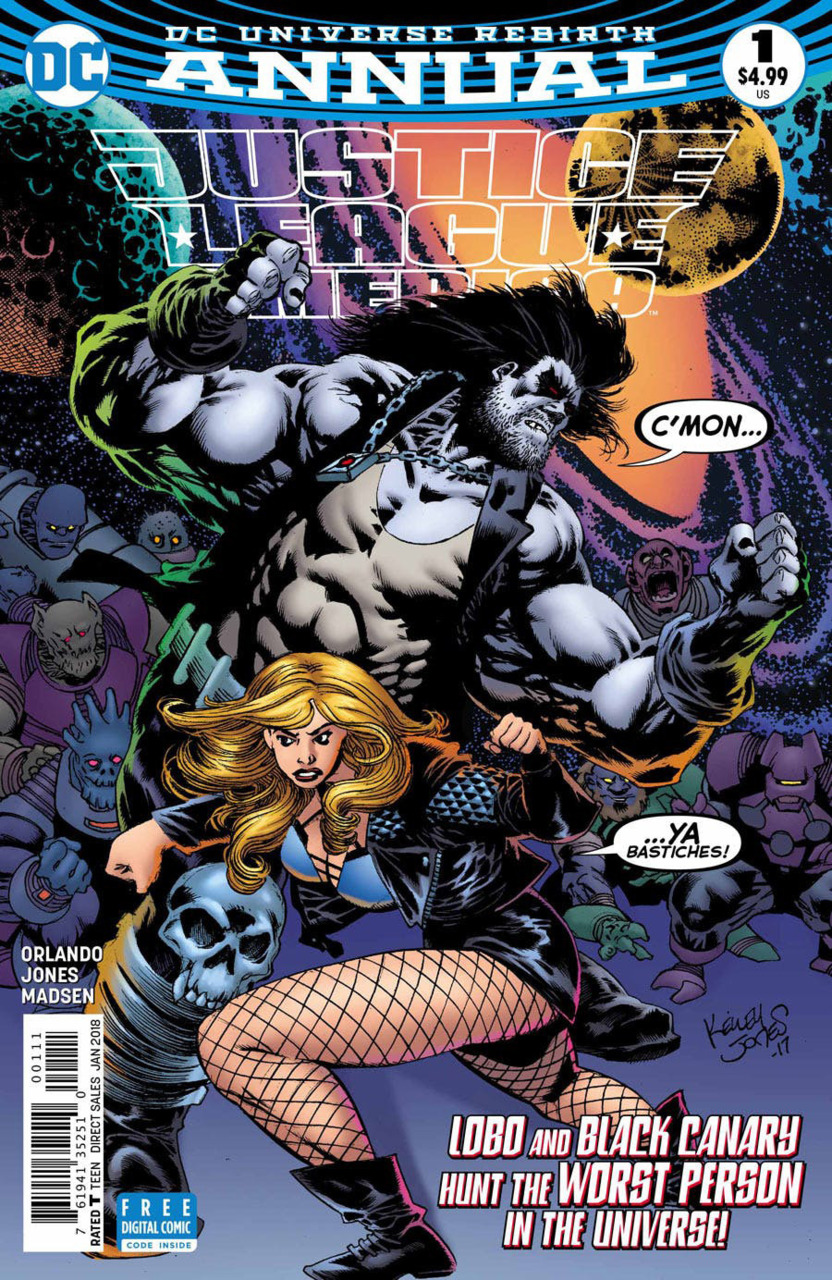 Overview: It’s been almost a year since the fallout of Justice League vs. Suicide Squad and the emergence of Batman’s new Justice League of America.  Czarian brawler Lobo seemed like an odd choice to be one of the JLA’s heavyweights, but an unspoken agreement between the “main man” and Batman led to their partnership.  In these pages we finally learn what exactly Lobo is getting out of the arrangement, and whether or not it lives up to the hype.

Synopsis (spoilers ahead): Lobo has requested Black Canary’s assistance in a quick mission to space, which she is not entirely thrilled about.  He expounds on his agreement with Batman, to assist in the eventual showdown with the Might Behind the Mirror that writer Steve Orlando has been building towards in exchange for information.  The information is the home world of space dolphins, which Lobo finds to be the most beautiful, calming force in the universe.  They are a secretive race and someone has been hunting them across the galaxy with ill intent.  Batman has finally determined an approximate location of the space dolphin’s homeworld so Lobo heads off with Black Canary in tow to investigate the harm that has come to his friends.

Upon arrival, the team is immediately captured and the villain is revealed to be another Czarian who was off-world when Lobo destroyed the race.  Moreover, this Czarian specifically is a Tribb, a member of a family with whom Lobo feuded in his early childhood.  Lobo went on to make the name Tribb synonymous with weakness and cowardice throughout the galaxy.  As payback for this affront, as well as the genocide of his race, the last remaining Tribb waged his own genocide against the space dolphins.  Some words are exchanged and for some reason Black Canary fights Tribb, who is eventually defeated and consumed by the space dolphins who are now free of his tyranny.  Lobo makes like he won’t be heading back to Earth, but relents and returns to fulfill his part of the bargain.

Analysis: This isn’t worth your time and I’m not sure why Steve Orlando decided to play out the Lobo story in this manner.  There is definitely the attempt to give the story some heart with the details of Lobo’s troubled youth and his emotional connections with space dolphins, but nothing connects on anything other than a purely superficial level.  I would have enjoyed a more intimate look at the Lobo character, maybe subvert our expectations a little and portray him as some other than merely a fowl-mouthed space biker.  The attempt was noble, but the result was a painfully drawn out story with humor that consistently missed the mark.  I want to like the fact that bad-boy Lobo has a soft spot for dolphins, but the overall ridiculousness of the story killed it for me.  Maybe if the team had played things a little straighter I’d feel otherwise, but I’m not optimistic.

Kelley Jones on art had a few good moments, but presented us with a terribly uneven visual story.  The lack of consistency was difficult to get through in these pages, specifically in regards to the artist’s depictions of Black Canary, with some serious late-era Frank Miller vibes happening.  Lobo’s depiction was decent throughout, with the exception of the consistency issues when his appearance would change drastically from panel to panel.  Jones wasn’t ready for an undertaking of this degree and the results sadly are obvious.

Final Thoughts: Sadly, this issue is the epitome of what could go wrong in the pages of an annual.  What little character progression there is, feels insincere and the few reveals are played more for laughs than anything series.  I wanted more from this spotlight on Lobo, a character I never much cared for in the past, but has intrigued me thus far in JLA thanks to his mysterious deal with Batman.  This issue was very much a disappointment and not worth your time.  Hard pass.