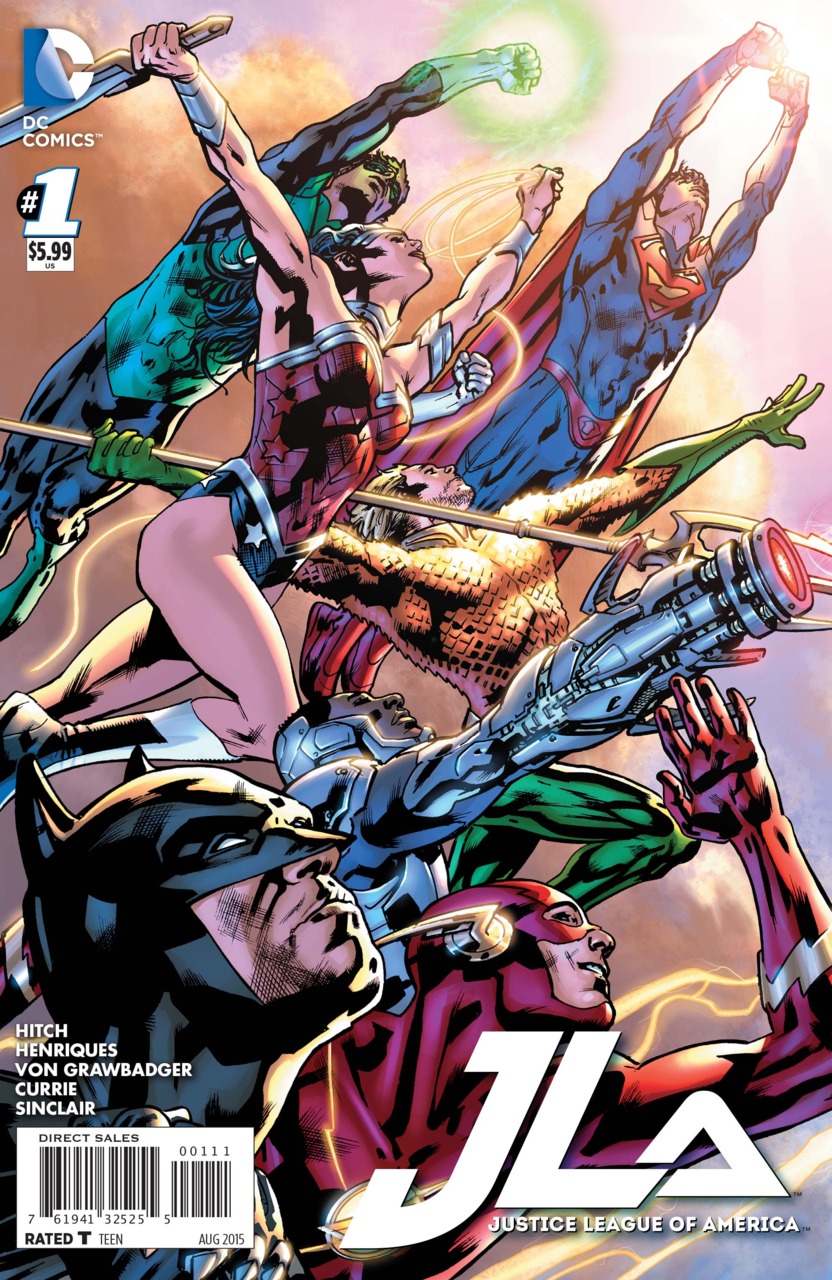 As this new series begins, we find Superman in the midst of some sort of battle with an unseen opponent. As the world seems to blow apart and the Man of Steel is shot into space, two voices begin talking about a situation that has occurred…while one is told that he shouldn’t overact, another talks about something that is incoming, and this one is alive!

Cutting to Metropolis, Clark Kent arrives at the Daily Planet to find Lois Lane holding an invitation for Clark regarding something called The Infinity Corporation. As Superman takes off, we then cut to the Maw Super Prison where a guard is shown to be taking an inmate out of the facility. A slight Jedi Mind trick forces the other guards to let them pass, and they quickly board a plane and leave the facility behind.

As Superman arrives in New York, he is greeted by Alexis Martin and the two discuss the invitation and how they could have known Superman’s secret identity. Alexis mentions that her boss, a man named Vincent, desperately needs to meet with him. As they are about to enter a room, Alexis comments that Superman needs to not overreact to what he is about to see…as the door opens, it reveals dozens of dead bodies – all of them Superman himself. Superman seems shocked at what he sees and is quickly guided to Vincent. However, they are quickly interrupted when they are informed another body is arriving, but this one is still alive. As another Superman appears within the center of a large machine, dying Superman looks at present day Superman and whispers “…don’t trust him…” before he himself dies due to his wounds. After a brief temper tantrum, Vincent introduces himself to Superman and explains that they have access to some sort of being known as the Stones of Forever.

Cutting to the New Metropolis Clean Energy Power Plant, we see the guard from the Maw prison as they unload the casket containing one of the prisoners. Then, over at the United Nations Building, Aquaman is busy talking to the assembly about a shared technology plan between Atlantis and the surface world…however, this is cut short when Aquaman is summoned back home.

Back at Infinity Corporation, Vincent is busy explaining about the Stones of Forever and how they keep depositing dead bodies of Superman which apparently spells out the end of the universe/time as we know. As Supes and Vincent begin to argue, the former states that he won’t be going into hiding and stop helping people.

Back in Metropolis, Green Lantern arrives at the Power Plant alongside the Flash, Wonder Woman and Batman who all received invitations to meet at their location. Quickly sensing a trap, the Dark Knight attempts to tell GL to leave the scene…however, his energy is quickly absorbed and the former prison reveals himself to be Parasite. With the power to absorb any energy that he comes into contact with, Parasite quickly saps the Lantern energy and turns his attention on the Speed Force and the Flash. As Wonder Woman gets into the battle, Batman and Flash are knocked down by the now growing villain. Over at Infinity Corporation, Vincent shows Superman what is happening with the rest of the League and the Man of Steel quickly flies off to help. As he leaves, Alexis and Vincent wonder whether they should have told Superman who they really were.

As Parasite begins to eat Wonder Woman, the Amazon begins to feel a great pain and many voices crying out because of it. As Superman flies in and rescues her, Green Lantern manages to come around and start attacking Parasite once again. The League is becoming increasingly overpowered as Parasite saps their abilities; however the quick arrival of Cyborg seems to help briefly.

Superman begins distracting the villain as Cyborg and Batman rush into the Power Plant…there plan is to connect Parasite to the plant itself and redistribute the absorbed energy out of him. They eventually succeed but before Green Lantern and Flash disappear in a portal back to Oa and Wonder Woman is also missing.

The issue ends with the arrival of a weird space ship in orbit which Superman seems to recognize. The final panel shows a being exiting the ship and identifying himself as the Great God Rao.

Well, for a book that had no teaser or hint at what was to come this book had a ton of stuff dropped on us.

First off, I’m going to skip over the fact that this story makes no sense continuity wise…and therefore I have to assume that this is one of those books that is focusing more story than making sense with other books…one could interpret this is an early story of the Justice League prior to the events of today. However, this is basically a standalone story that focuses on the League’s core members without having to worry about Batman being “dead,” Superman being outted to the world as Clark Kent or the fact that Green Lantern is not even a Lantern anymore and is being pursued by his former allies.

Overall I was really intrigued by this story, however I have slight issues with the setup revolving around the destruction of the universe all because Superman dies…don’t really think he’d be the “be all, end all.” Otherwise, I’m really interested to find out what major event is going to take place…obviously we were given hints at it in the beginning and the Stones of Forever seem to also lead to a giant catastrophe about to happen.

I liked some of the individual moments with Batman (there were few, but they were still good), why was he the only one to foresee a trap? I mean, do all super heroes receiving a letter inviting them to Power Plant in the middle of the night? And yet GL, Flash and Wonder Woman all show up without any hesitation…thought that was kind of weird.

Although a bit slow in some spots, I liked the action in the battle against Parasite…we really got to see each hero take on the villain in their own way…however, I have to shake my head at Lantern and Flash from not listening to Batman and stop giving more of their power to the energy sucking monster.

I am intrigued to see what this story will be holding and look forward to picking it up next month…however, the best part of this issue was definitely the art. Bryan Hitch did an amazing job on the pencils and I went back a second time just to look at his images in more detail.