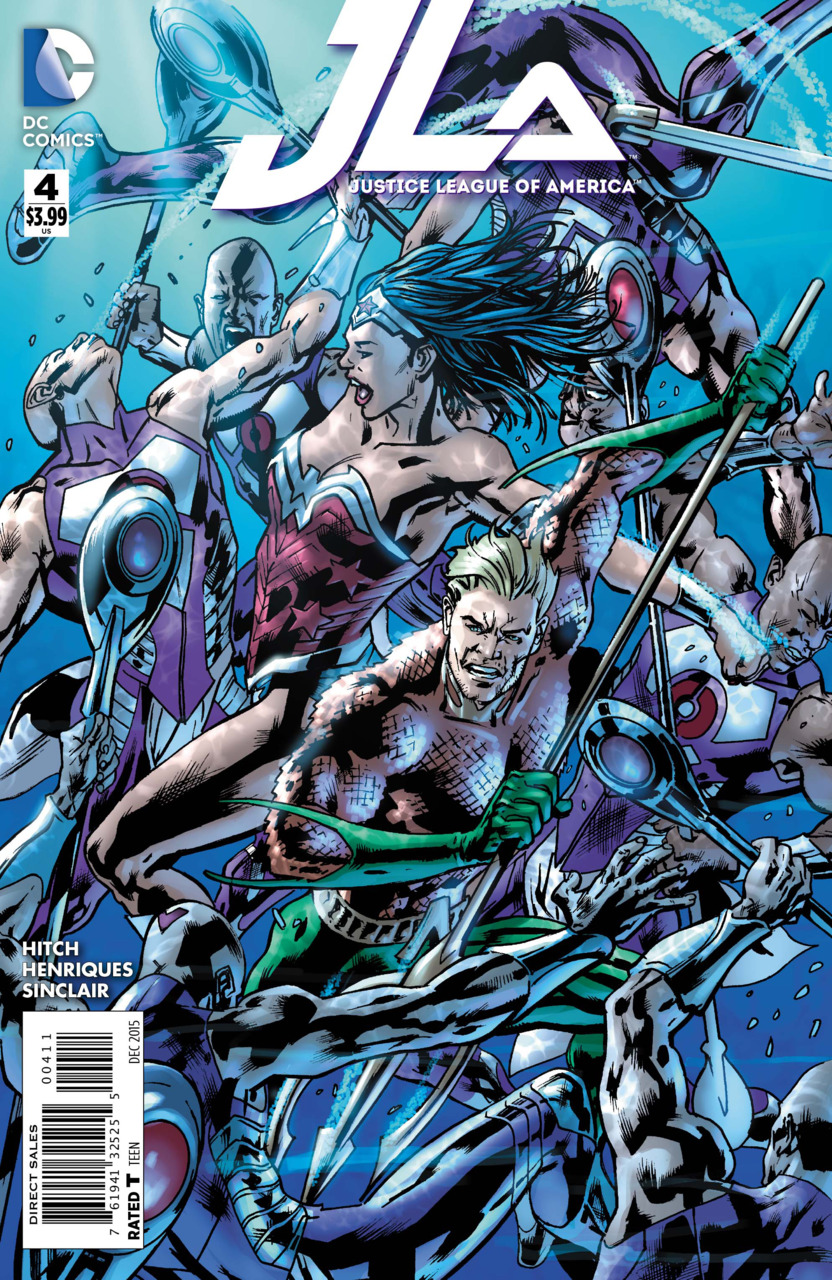 The issue opens with Superman arriving at the lab of Cyborg and his father Silas Stone and presenting them with a vial of his own blood. Asking them to take a look at his blood and determine if there is anything unusual about it, Silas comments to his son (after Supes leaves) that the information they discover could be used to enhance the Kryptonian Protocols designed by Batman.

Elsewhere on Earth, Rao continues to heal the injured and spread his message across the globe…we see several news reports encouraging those who have not been blessed by Rao and his prophets to do so. At Gotham General Hospital, a doctor discovers Batman putting a former thief through and MRI machine…the Dark Knight believes that something may have inherently been changed within the man after being “blessed” by Rao. The doctor agrees to help Batman and put the man through a battery of tests.

We then cut to the distant past on Krypton where Green Lantern remains stranded. Arriving at a citadel, GL is introduced to an old man by the name of Rao. Rao explains that he may be able to help Hal return home, but his duty as a Green Lantern binds him to dealing with a problem on Krypton – a warlord as sought to take over Argo City.

Back in the present, the doctor discovers that certain sections of the former thief’s brain have been enlarged and his DNA shows new protein markers…all of which points to the fact that he has been genetically rewired to have a better life. We then cut to a family attempting to convince their daughter to be blessed by Rao, the daughter struggles because she claims to have seen her friends at school become “different” after the blessing. As the parents pull their struggling daughter towards the Kryptonian God, Rao succeeds in blessing her and the child immediately calms down.

Cutting to the Arctic, Superman arrives at the Fortress of Solitude and begins looking for more information regarding Rao. Receiving a call from Cyborg and Batman, the three heroes discuss how the blessed people’s DNA is being rewritten by Rao…while Cyborg reveals that this same rewrite is present in Superman’s DNA as well, however this seems to have occurred sometime in the past as all Kryptonians possess the rewrite.

As the issue ends, Green Lantern witnesses the old Rao absorbing energy from his prophets to become younger, Batman is attacked by a prophet at the hospital and Rao arrives at the Fortress to confront Superman.

This was definitely a better issue than the last one…the story seems to be moving forward and we are finally getting a sense of what Rao may be after.

The big reveal is that Rao and his prophets are somehow changing the human genetic code in some way, to us it seems to make us more susceptible and happy…but this also seems to turn everyone into a diehard Rao fanatic. It gives off an almost cult like vibe, especially the scene where we see the family dragging their daughter towards Rao…a little disturbing for my taste.

Ultimately I think Rao may be using the humans of Earth to remain immortal somehow. We see the older Rao in the past draining life energy from his prophets to return to a younger form…maybe he is attempting to do this on a larger scale to remain young? Could he have done this in the past which affected Krypton’s destruction?

I also like that we got to see the JL working together, Superman finally seems to have come to his senses in regards to Rao…and Batman (of course) was a doubter from the beginning. I am a little concerned that Aquaman is seen chilling on a couch watching the news unfold rather than helping out in some way…we also did not see Wonder Woman this issue.

Overall this series finally seems to be going somewhere after the last few issues of ambiguity, so I look forward to see what the Kryptonian God has in store for the heroes and people of Earth.