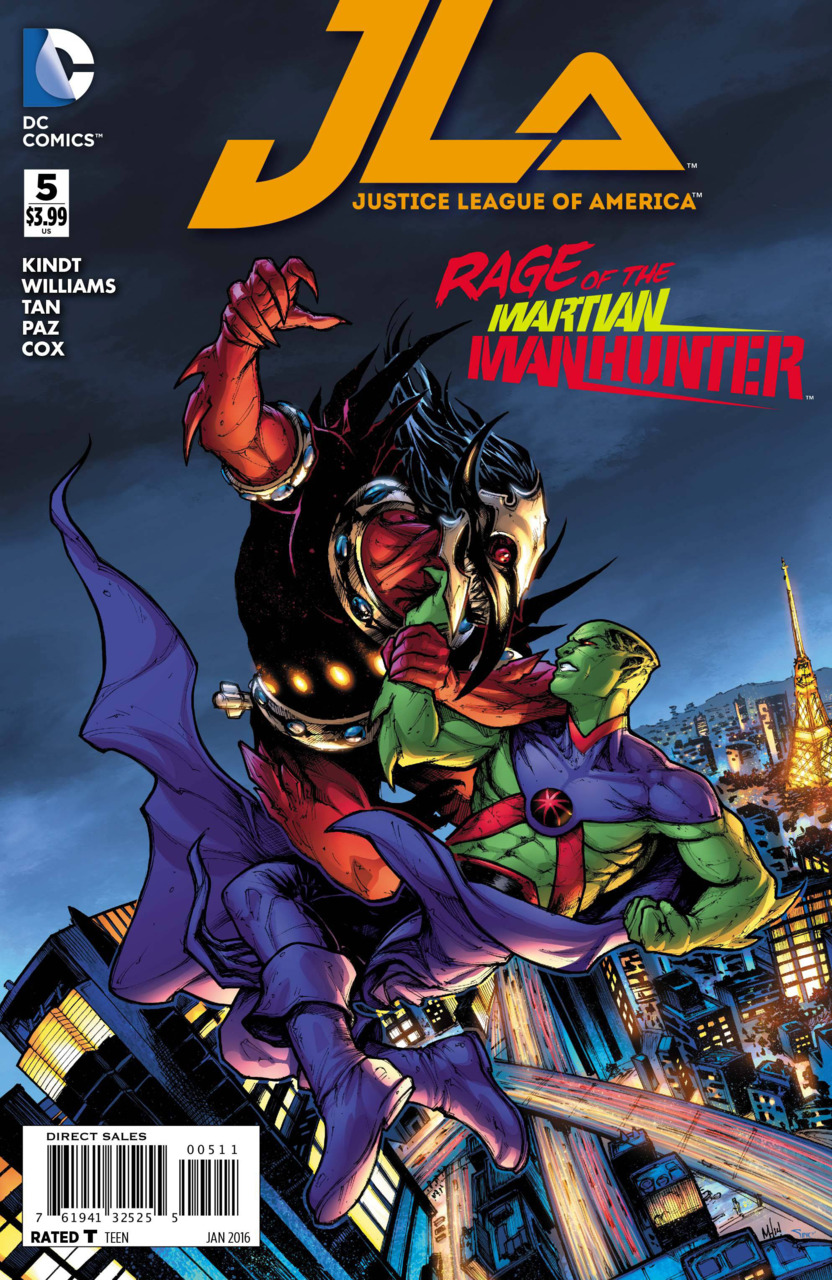 Following last month’s interesting cliffhanger, we pick up in a completely different place. Due to Bryan Hitch’s inability to finish both writing and penciling his solicited issue 5 of Justice League of America, essentially a Martian Manhunter-based one-shot hit the stands this past Wednesday. Fill-in writers Matt Kindt and Rob Williams, the current writer of the Martian Manhunter series, delivered a JLA issue that features the current League on a mere three pages.

The issue opens in the past at the Justice League Watchtower. We read the Martian Manhunter’s thoughts as he observes the the rest of the league like a wallflower. As Green Lantern offers J’onn something to eat, it becomes more evident that Martian Manhunter is an outsider amidst the league by the way Lantern admittedly has absolutely no idea what he would eat.

Two following panels show Batman noticing J’onn’s distance. Martian Manhunter observes Batman’s glances, questioning to himself, “Does he fully trust me, I wonder? Does he realize I could make him trust me…?”

In Death Valley, Nevada, we see J’onn question what his purpose is in a foreign world and whether he really looks like a superhero next to the rest of the league.

Martian Manhunter picks up in Tokyo, Japan, taking the form of a Senior Japanese Detective to learn the memories of his colleagues regarding a specific murder case involving what he believes to be a martian killer. In the midst of dialoguing with his coworkers, J’onn questions whether what he is doing is ethical but justifies it because he is attempting to catch a murderer.

The investigations reveal that a series of murders have been linked to a Mars cult although they’ve been ruled as suicides by previous investigations. Martian Manhunter concludes that these people were each possessed and used to draw his attention.

J’onn approaches one recent scene of a murder. Observing that the police arrived almost too quickly, he views the scene from the shadows with caution. He hears in his mind the voice of the killer, revealing to him that he is there. As Martian Manhunter passes through the wall to approach the scene, one of the crime scene investigators transforms into what J’onn refers to as “a monster.” He tells J’onn to call him “The UnNamed.”

Martian Manhunter and The UnNamed battle for a few pages while each enters into one another’s heads, reading each other’s minds. The UnNamed attempts to convince J’onn that he, too, is a killer while revealing to him that he, himself, is not Martian.

J’onn defeats him by entering and erasing the mind of an old man that The UnNamed was attempting to takeover, leaving him helpless. He eventually restores the old man’s mind after he observes no presence of The UnNamed.

The issue concludes with J’onn walking alone through Death Valley again. As he realizes his care for humanity, he resolves to save them and live as a hero while slowly drifting beneath the surface to the certain of the earth. Not only does he resolve to protect the planet but also to watch and learn from the rest of the League.

After getting over the initial disappointment of this issue not picking up where issue four left off, I really enjoyed what Kindt and Williams put together. As someone who has been reading Williams’ run on Martian Manhunter, I enjoyed seeing him in another book in a manner pretty different than what’s currently going on in the main book. The thoughts J’onn and their symbolism resonate well with anyone who has felt like an outsider.

In regards to rest of the League, Philip Tan’s pencils seemed a little choppy. It’s also worth noting that Tan inked the first two pages which is where the League is featured in The Watchtower; I’m glad Jason Paz took over inks from then on. Tan’s pencils married with Paz’s inks and Jeromy Cox’s colors were phenomenal when looking at Martian Manhunter and The UnNamed. The fight sequences, especially when J’onn punches The UnNamed up at least seven floors of a building through the roof, are visually thrilling. I wish that specific panel was a full-page shot. The only other downside to the art section was how the humans looked. Often, I felt they looked too cartoon-esque or, in some areas, anime-like.