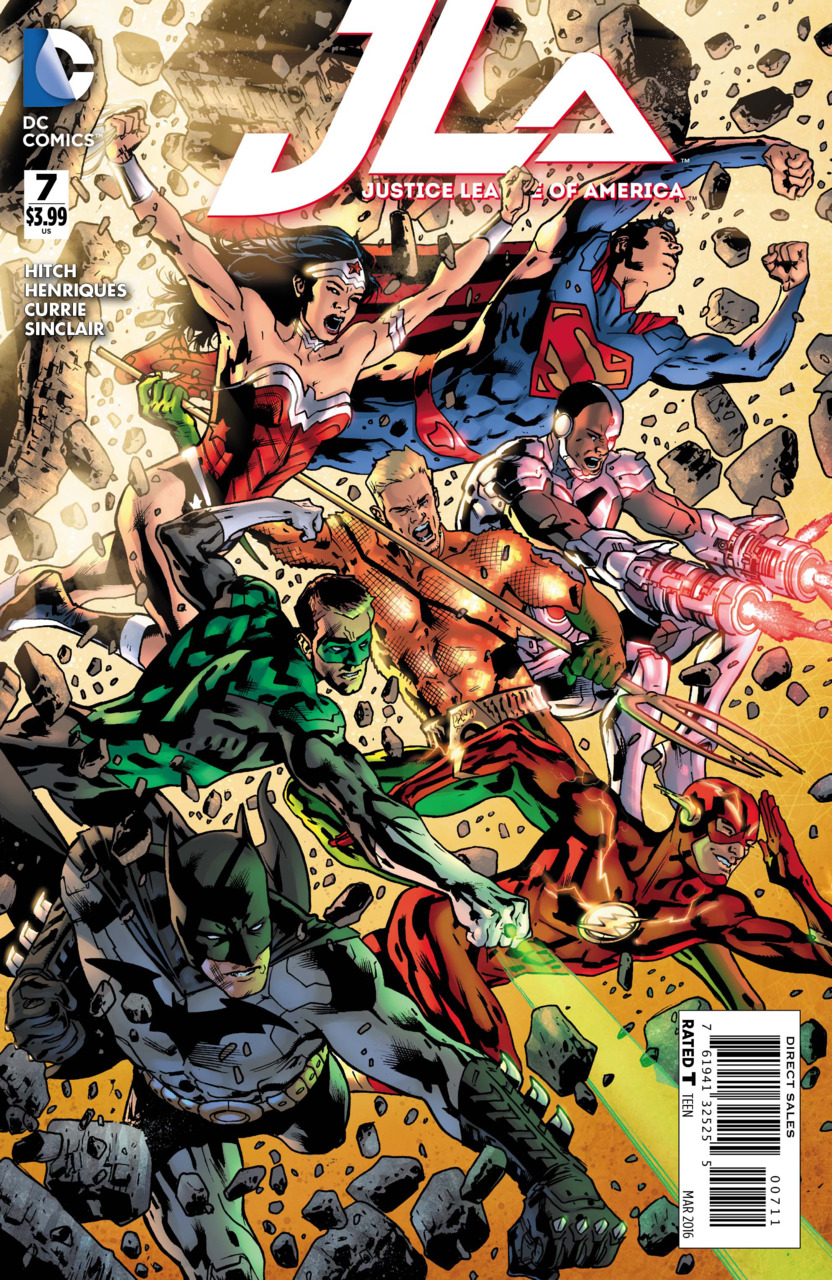 Cyborg has yet to hear from Superman. Batman assumes the worse and rightfully so: Rao has taken Superman captive.

Meanwhile, Batman gives Cyborg a staff from one of Rao’s prophets to analyze. After hacking into it, Cyborg is able to see glimpses of Rao’s prophets and Rao, himself. It appears that Rao is using the energy of people they convert to make himself stronger. They attempt to divulge a plan against Rao but understand how hopeless their cause looks: them versus God.

Aquaman and Wonder Woman are alive on Olympus after the seemingly catastrophic events of issue #6. Diana explains to Arthur how she rebuilt Olympus because she ultimately is the final god of the city.

In the Cathedral of Rao just over New York City, Rao asks his prophets if they’ve found “it.” To his dissatisfaction, they have been unable to locate whatever it is they’ve been looking for. Rao is notified that Superman has woken up and decides to go see him.

Batman and Cyborg plot a means to distract Rao and potentially free Superman. However, because of Rao’s power, they fear that he could be hearing their conversations.

While locked up by all of his limbs, Superman is taunted by Rao. He calls Rao a false god, stating that he would not be as powerful as he is without people converting to his church. Rao contends that his work of bringing world peace and healing diseases validates his claim. However, Superman points out that if people knew that his work stripped time from their lives, they would forsake him. Rao questions whether Superman would want to bring death and disease back simply to end him.

At the Argo Citadel in Krypton 250,000 years ago, Green Lantern is with a younger Rao. They enter a room with the life stones and come across Rao from the future, the Rao that is holding Superman captive. This time-travel conversation gets somewhat confusing but ultimately resolves with Rao revealing to Green Lantern and Rao from 250,000 years ago that converting ancient Krypton is a key component to his plan.

In Olympus, Wonder Woman walks Aquaman through various armory rooms. She shows her all of the ancient weapons she’s collected over the centuries, from the thunderbolt of Zeus to Hades’ helmet. The scene concludes with Wonder Woman epically giving Aquaman a triton from the god of the oceans.

At the Infinity Building Corp Building, we briefly see Flash with a few others encountering trouble from the infinity stones. We find out that the stones are saying, “they’re here” but Barry has no idea what that means.

Concluding in Rao’s Cathedral, as Rao takes quite a long time to talk to Superman instead of completing his plan, Superman cleverly takes the time to fly Rao’s cathedral away from earth. Rao is too late to realize that while he was talking, Superman flies the cathedral into the moon.

After taking a step back from the issue, you realize how little actually occurred. With that being said, I still very much enjoyed a majority of this month’s book. The Flash and Green Lantern definitely were short-handed but understandably so. Much of the issue’s meat seemingly is found in the arcs of Superman and Rao, Batman and Cyborg, and Wonder Woman and Aquaman; perhaps Flash and Green Lantern will contribute more in future books. While the book was dialogue-dense, the payoff was worth it. Once again, the ending forces you to respond with nothing less than a, “wow!”

Hitch continues to produce incredible pencils. Specifically, I think he nails Superman as good as anyone I’ve seen. This issue in particular possesses a handful of gorgeous shots that highlight his skill as well as the inks of Henriques and Currie and Sinclair’s vibrant colors. The nearly full-page shot of the sun beaming down on Olympus powerfully exudes rich emotion which sets up the scene well. The scenes between Rao and the imprisoned Superman are worth the $3.99 cover price. Lastly, the handful of panels featuring Wonder Woman and Aquaman in Diana’s weaponry rooms are such a joy to experience. The room with weapons previously owned by the likes of Apollo and Zeus are simply fantastic.