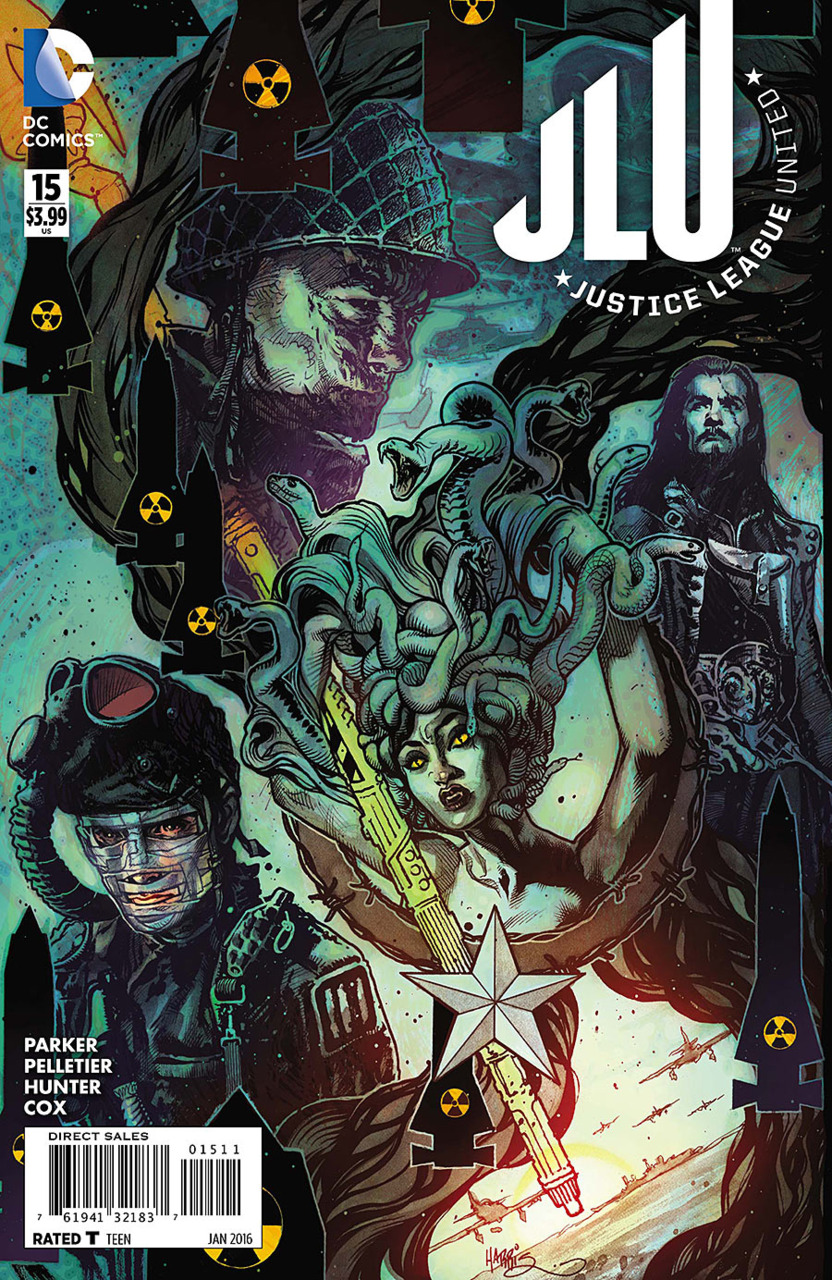 Opening up in the heat of battle, Stargirl and Enemy Ace fly back towards the fighting in search of her missing cosmic rod. Meanwhile, on the ground below, OMAC takes on Robotman and Steel as the former tries to take down the One Man Attack Construct with the cosmic rod. Briefly blinded, Robotman and Steel super punch OMAC and take him out of the game. Eventually, all our characters (Batgirl & Vandal Savage, the Creature Commandos, Easy Company) converge at a single point and continue to battle. At one point, Enemy Ace is shot out of the sky and Stargirl flies to his rescue after retrieving her cosmic staff.

Calling a temporary truce, Vandal Savage gains the attention of everyone…however a sudden attack from the Unknown Soldier nearly kills everyone…however; some quick shielding by Robotman manages to save the day. With everyone finally assembled, the Justice League United explains the situation regarding the breaker point and how time has seemed to merge at this epicenter. Coming to the conclusion that the center of the distortions is centered around a cathedral, the characters ban together in order to repel the enemy forces to gain their position.

Led by Sgt. Rock, the Commandos, Enemy Ace and Savage manage to take down several Nazis attack groups, as well as some snipers. As some tanks role up, OMAC, Robotman and the GI Robot take down the invading forces. Reaching the cathedral, Stargirl uses her rod to blow open the building revealing the Unknown Soldier inside. However, it is soon discovered that the Soldier is just a manifestation of the breaker point in an attempt to stop the heroes from succeeding in their mission. Successfully knocking a gun from his hand, Batgirl rushes at the Soldier while Rock impales their foe on a bayonet.

In the subsequent explosion, the Soldier dissipates and time is returned to normal…back in 2015, the JLU stands victorious as Alanna arrives to return everyone to their proper locations; in 1944, Easy Company returns to their duty…and in 1918, Enemy Ace is shown overlooking the French countryside.

After a few action packed first issues, this one falls rather flat and gets wrapped up rather quickly. I think the best way to sum up the ending to this particular storyline is “convenient.” As the issue opens, we see that are groups of heroes are still battling one another…however, a quick surrender by Vandal Savage quickly unites all of our characters, even though a page before they were all willing to attack each other.

Following a team building campfire, our heroes figure out exactly what they need to do and in the subsequent pages manage to take down the enemy troops and reach the center point of the breaker. Taking out the Unknown Soldier is rather quick and his death catapults everyone back to their proper timelines.

I found it rather a letdown that this issue wrapped up so quickly, and I’m on the fence whether Jeff Parker should have extended the storyline another issue, or cut it short by one. It also seemed that there were far too many characters being introduced in a short 3-part story – Easy Company, the Creature Commandos, Enemy Ace and the assembled JLU characters.

All in all, this story was kind of a letdown, and I can see why this series is getting cancelled next month. I had hoped that a team up book of this nature would have some nice 2 or 3-part stories with rotating cast of 4 or 5 characters…however, I think Parker may have tried to cram too much into too short of an arc.