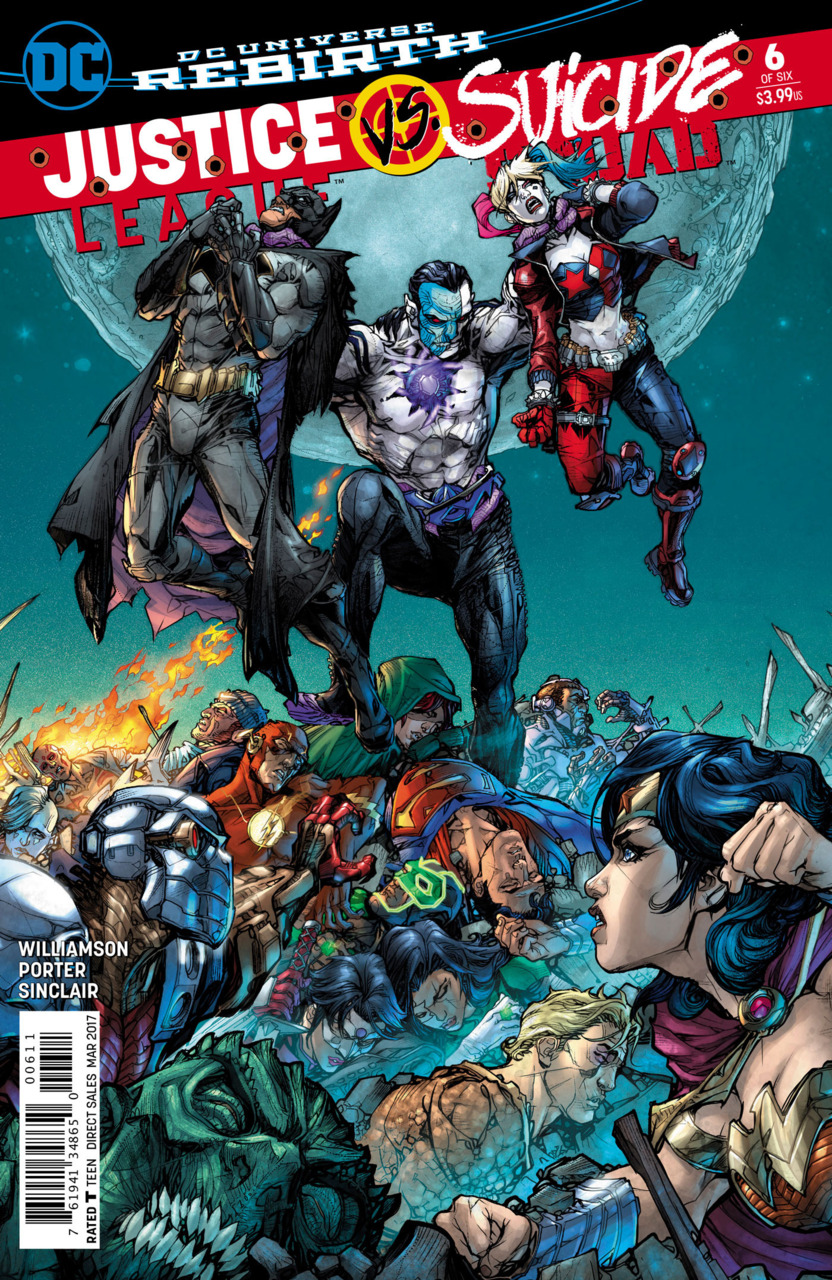 Synopsis: The issue picks up with the few remaining heroes battling the Justice League members trapped by Eclipso’s powers. He floats above the battle remarking at how his darkness will always be present in the world just as humanity’s wickedness and evil will be. One by one he begins to even take down the few remaining members of the Suicide Squad like Deadshot. He convinces Deadshot that he can be free of any guilt if he would just kill his daughter. After converting Deadshot, Eclipso focuses his attention on to Amanda Waller. He tells her that her sunglight prison could not hold him forever. Overhearing this, Batman attempts to alert the remaining team members that they need to utilize sunglight to neutralize the Heart of Darkness. Since Eclipso has blocked the actual sun, Batman has to devise a plan with Killer Frost and Lobo to redirect Superman’s laser vision through an ice crystal to channel the solar energy at Eclipso.

While Batman and Lobo distract the League and Suicide Squad, Killer Frost beings to assemble a prism capable of redirecting solar energy. She is able to complete just in time for Batman to taunt Superman into using his laser vision. The beams hit the prism and find their intended target of Eclipso. Though Killer Frost is severely weakened, the League and Task Force X is now back to normal and are willing to share their life force with her to give her the power to contain the Heart of Darkness. In a massive explosion, the solar energy is able to separate the Heart of Darkness from Maxwell Lord. Waller orders Killer Frost to take him out and absorb his life force. Killer Frost refuses and decides to quit Suicide Squad as she would rather die than take another person’s life force.

Back in Belle Reve Penitentiary, the League and the Suicide Squad get to know one another a little better. Superman debriefs Killer Frost as she recovers from her near death experience. She admits to Superman that she was most afraid of the hope that she had deep down in being a hero of some kind. Meanwhile, Batman tells Waller that he will be taking Killer Frost with him and under the League’s supervision. Despite some protesting, Waller agrees and Batman admits that Task Force X does seem to provide a purpose and that the two teams can co-exist.

Outside the prison, Batman tells Lobo to join the Justice League despite his uneasiness about being around heroes. The issue concludes in a hidden lab where Lord is being held by Waller. He applauds her for setting up the whole situation so that Batman could eventually see the good that the Suicide Squad can do. She tells him that she won’t kill him because he will make a great asset to Task Force XI.

Thoughts: As far as this issue goes, I thought it was a solid conclusion to the crossover. The villain Eclipso did not have a lot of depth to him and the Heart of Darkness felt a little textbook as far as a plot point to get the Justice League to fight the Suicide Squad. The issue did have a few nice character moments such as the debriefing between Superman and Killer Frost regarding her fear of having hope. It was a nice exchange and added to Frost’s character development.

One of my favorite moments was actually the debriefing after the big climax. I really enjoyed the interactions between the Justice League and the Suicide Squad. Each characters’ questions and answers fit their personalities perfectly and captured the fun quality that can be had in these crossovers.