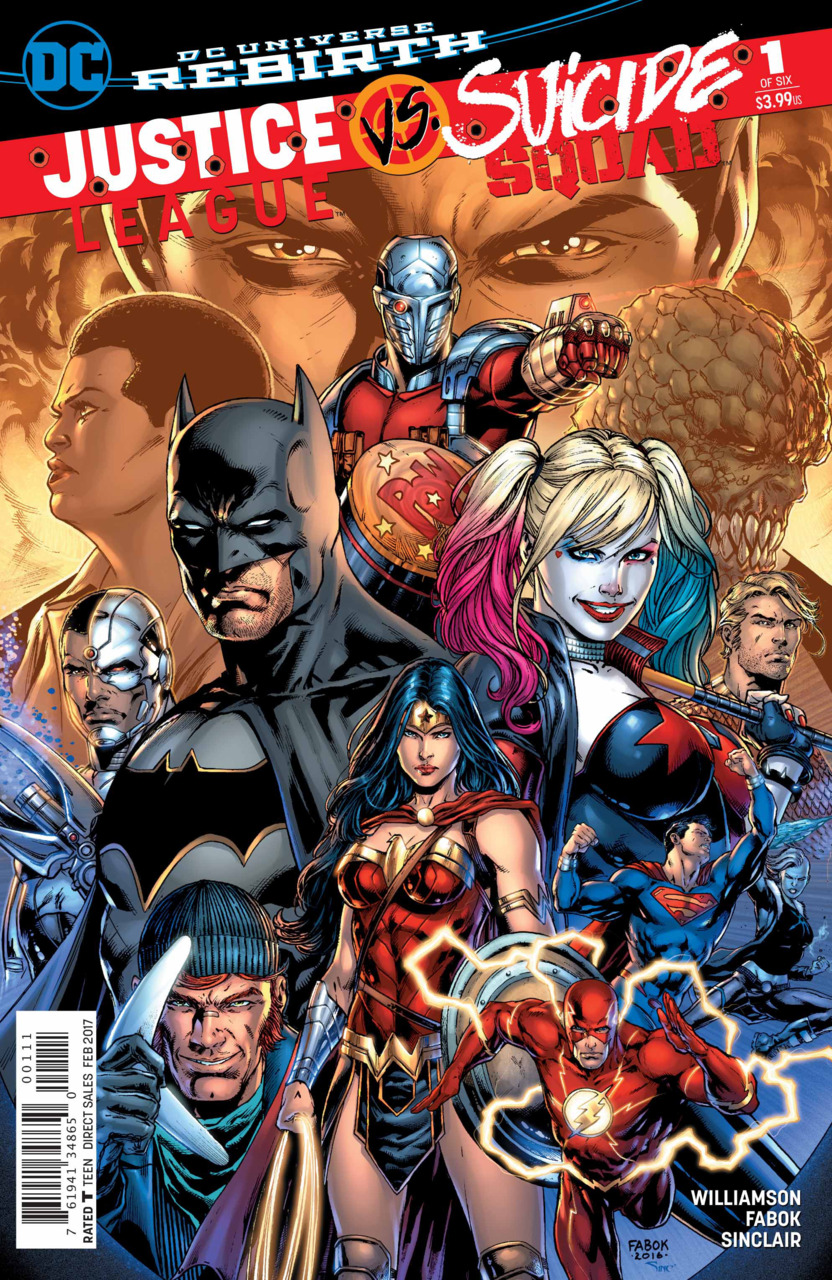 A mysterious figure walks into a top security prison in Death Valley, California. Two guards try to stop him but he commands them to shoot each other which they surprisingly do. He then enters the prison control center and commands the man at the prison control console to release the prisoners. The man does. A number of heavily armed guards enter. The mysterious man shoots a beam at the guards which turns the members of Prison Workers Local 123 into dust. A group of dangerous criminals have been released.

Meanwhile in the island of Badhnisia, the Suicide Squad is on a mission to stop a death cult lead by a man named Apex from using a Pulsar weapon stolen from S. T. A. R. Labs to destroy the island.

Killer Frost is on her first mission with the Squad and Amanda Waller has sent them out without Rick Flag. Flag is upset about this and decides to leave the cozy confines of Belle Reve to help his team.

The Squad defeats the cult thugs and faces their boss Apex who uses the Pulsar to shake up the island. He is stopped from sinking the place into the ocean by a timely bullet from Deadshot.

Also meanwhile at Justice League Headquarters, Batman describes the threat that the Suicide Squad poses to the rest of the League. All the goodies decide that Amanda Waller is behaving irresponsibly by using the Squad and decide to do something about it. They don’t realize that the individuals have bombs implanted in their necks, which is a pretty big miss for our favorite wing’ed detective.

Back in Badhnisia, the Pulsar’s quake has destabilized the building that Deadshot is on top of. As it prepares to collapse, Floyd says goodbye to a picture of him and his daughter and jumps expecting to die. Superman arrives on the scene and gives Deadshot the full Margot Kidder routine, saving his life. The rest of the League arrives and saves everyone else’s lives and gives them some feel-good-yummy-noises to boot.

The Justice League tells the Squad that they have to come with them to be arrested. Through their coms Amanda Waller assures them that if they go with the League she will pop their heads. Deadshot takes a shot at Batman and misses which begins a fight between the two teams. Who will win?

Meanwhile meanwhile, remember those prisoners who escaped from that prison in sequence 1? They are in a foreboding castle in the Swiss Alps. They are revealed to be Emerald Empress, Lobo, Doctor Polaris, Johnny Sorrow, and Rustam. They have been assembled by Maxwell Lord who has a plan to kill Amanda Waller and save the world, the details of which are left unexplained presumably until next issue.

The plot of this super team square off, written by Joshua Williamson, seems like it is a fairly predictable story so far. The way it looks like it will develop is: bad guys are broken out of prison, naughty good guys and goody good guys fight for a while until the bad guys force them to join each other to fight the common threat. We haven’t gotten to the team up part of the story but we probably will. Hopefully this isn’t the case and we can get a plot twist in the upcoming issues. Only time will tell. The Rebirth model of bringing old school characters, such as Maxwell Lord, Doctor Polaris, and Rustam, into the stories works with this kind of team up book. There will be a lot of characters to keep track of, but there does seem to be some good fight match ups between the baddies, goodies, and so-so-ies.

The artist Jason Fabok and colorist Alex Sinclair do a good job with the art of the issue. The story is clear and the characters looks and actions all make sense. Boomerang is well conceived. The full page panel of Superman saving Deadshot is good but not spectacular. The same goes with the full page Justice League portrait and the two page JL vs SS battle spread. It was cool to see Harley Quinn face off against Wonder Woman in the foreground however. DC knows where its bread is buttered.

I have to fess up and admit that I am not a Justice League fan so my feelings toward that part of this book might not jive with JL fans. The overly heroic dialogue is not to my taste and pales next to with the witty Suicide Squad patter. As is my usual complaint on these team up books is that the characters and relationships suffer due to the panel-time needs of the twenty-one main characters. Some might appreciate having all of these characters introduced in text to keep track of who is who, though most are familiar.

I am not going to rate this book too highly, but I recognize that is because of my personal prejudice. If you are a big fan of the Justice League, Suicide Squad, or just like to see classic characters in print again I’m sure there will be a lot here for you to enjoy. The $3.99 cover price is a bit more than the typical Rebirth titles, though if this is up your alley you probably won’t be disappointed.