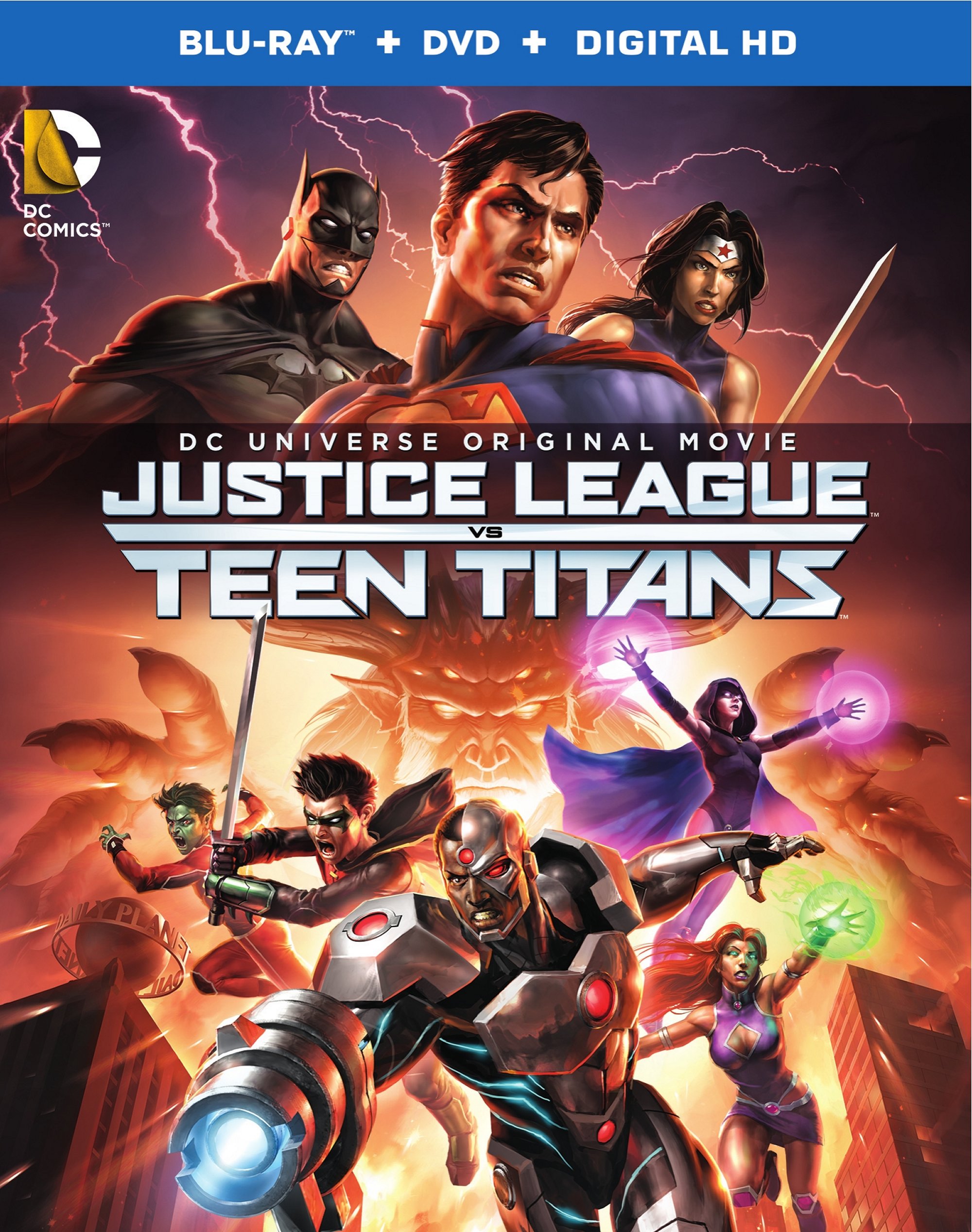 Justice League v Teen Titans is a strange beast of a movie, filled with neat character moments and some clever writing, but weighed down with an often sterile feel and slow moving plot.

Robin (Damian Wayne) is the point of view character here when he heads off to Titans Tower after some disagreements with the League in the aftermath of the initial battle. As an aside, Nightwing fans will enjoy another piece of banter with Damian on the way to the Tower. As always with Damian, his heart is in the right place hidden beneath a thick layer of defensively snarky attitude. This character has been exceptional throughout the DCU Animated movies so far and along with Raven’s backstory revolving around her demonic father, Trigon, a key strength of the movie is to keep Damian’s character arc filled with life and growth.

Turning to the Titans, the roll call is Beast Boy, Raven, Blue Beetle, with Starfire as team mentor and chaperone. A handy bunch in a crisis! The animation of all the Titan characters is good and the voice work is slick. Raven’s magic animations in the second half of the movie are particularly stunning.

With the exception of some Superman/Wonder Woman dating scenes and romantic in-joking the main character thrust of this movie is the Titans interaction which is lively and active. Although Raven and Damian do much of the heavy lifting, every character does get a moment – my patience for Beast Boy is limited but he remains likeable, but Blue Beetle seems intriguing and the character has room to grow in future installments.

Starfire is very consciously the den mother of the group, and amusingly takes the Titans to the fairground in a bonding exercise early on, following some typical teenage misunderstandings and showboating upon Damian’s arrival. Unfortunately, the fairground sequence displays some pacing issues with the movie.

After a neat piece of Raven-Damian dialogue and interaction on a Ferris wheel, a “dance-off” between various Titans members takes place that seems to stretch minutes long, killing forward story momentum and adding to the sterile nature of the moment as tinny bad music that wants to sound like other tinny bad music plays on and on, even whilst we cut away to Raven’s mysteriously demonic and far more interesting backstory.

Thankfully the dance off does end and as it is one of the weakest portions of the movie. Raven’s backstory takes the lead and the movie hits high gear just in time. When the Titans fight for the first time, a flashy animation announces the transformation of each character to battle garb – while it did feel more appropriate to be in the title of a TV show, the sequence looks fantastic and injects much needed energy into the piece. Raven’s story is actively explored and is darker and more dramatic than expected, whilst visually looking fantastic when we see her ruined home-world.

In conclusion, this is an effectively made movie which parlays Damian into the Titans franchise – a franchise that seems to wobble on shaky legs and overplayed character beats in the comics but surely has a lot of potential on TV for younger and teen viewers.

Unfortunately the presence of the Justice League as generic “demonic bad guys” does add to a feel of movie-making by not just committee but separate offices. If it wasn’t for some Superman/Wonder Woman interplay we almost wouldn’t feel like it was truly the Justice league at all. Its an understandable approach to include them given the icons involved in the Justice League but the Titans cast (which spoilers, does pick up another Leaguer cast-off by movie end) does show they have the legs and character depth to hold up an entertaining animated movie by themselves in the future.

Given the obvious story links to the Bat family through Damian, and with Nightwing seemingly available for cameos, it is easy to foresee a bright future and a better sequel for the Titans following this adventure.