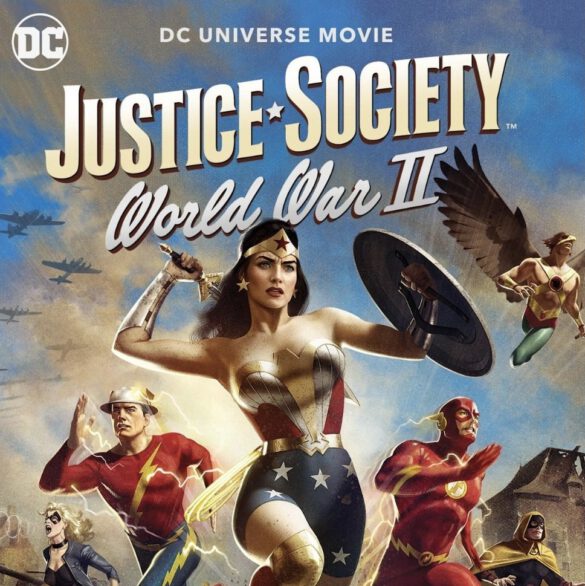 Synopsis (spoilers ahead): The movie opens with Steve Trevor telling President Franklin D. Roosevelt about the team of heroes he is forming to stop the Nazis from securing magical artifacts that could help them win the war. Trevor tells FDR that he has recruited Hourman, Hawkman, Black Canary, and the Flash (Jay Garrick). FDR asks Steve who will lead them. Wonder Woman then walks through the door.

In the present day, Barry Allen heads to Metropolis with Iris Allen to get away from “work.” Allen can’t seem to stop using his speed and is unable to relax. Iris tries to slow him down and asks him if they have a future together. Barry can’t quite answer and as that happens, there is an explosion nearby. It’s Superman battling Brainiac in Metropolis. Superman and Flash have a brief team-up that is cut short as Brainiac fires a Kryptonite bullet at Superman. As Flash races to stop it, his powers open up a time portal and he travels back in time to World War II where he encounters the Justice Society.

Stever Trevor takes Barry back to the JSA’s base as the group fears that because Barry is from the future, he will cause a time paradox. Barry wonders why he has never heard of the Justice Society and Steve tells him that is because the media and the government keep the JSA a secret and give all the credit to the US soldiers.

After arriving at the base, Barry meets “Shakespeare,” the JSA’s war correspondent. Barry wonders why he looks so familiar but is interrupted by Steve Trevor proposing to Wonder Woman, which is something Trevor does every day. Wonder Woman says no, and the team heads off to a Nazi base to meet a codebreaker who can help them in their fight.

The team arrives at the Nazi castle and split up to find the codebreaker and rescue the prisoners. Shakespeare finds a prisoner who gives him a bag that has a familiar red and blue suit in it. As that happens, Shakespeare is shot at by a Nazi soldier, and the bullets bounce off of him. Wonder Woman, Barry, and Steve see this happen and question Shakespeare. Shakespeare tells them that his name is Clark Kent and he is not from Earth. Barry realizes why he looks familiar and recognizes him as Superman from Barry’s time. When Kent knows nothing of being Superman, Barry realizes that he is not back in time but rather he is on a different Earth altogether.

While this is happening, the rest of the Society finds the codebreaker. The codebreaker is a tortured Dr. Fate. Fate is able to break the code, which coordinates to the Bermuda Triangle before he disappears.

The team heads to the location in a submarine, encountering enemy soldiers along the way. They are saved by Atlanteans and Aquaman. Aquaman and his advisor say that they will help them but lead the Justice Society to a room and then imprison them. Aquaman is revealed to be under Nazi mind control. His advisor works for the Nazis and is using the Atlanteans to try to take over the world. The advisor uses Aquaman to open up the Trench and plans to unleash the monsters on New York.

The JSA is able to handle the Atlantean soldiers but struggles once the monsters from the Trench arrive. Hawkman is killed in battle and shares a tearful goodbye with Black Canary while Wonder Woman battles Aquaman. Wonder Woman destroys Aquaman’s trident, which breaks Aquaman free from mind control. Horrified by what he has done, Aquaman takes the monsters back to their home below the seas. The Advisor, however, kills Steve Trevor as Nazi air ships fly towards New York, preparing to drop bombs. The JSA wonders what to do as Superman arrives and destroys the ships.

Wonder Woman realizes that Steve is dying. Steve tells Wonder Woman that tomorrow is never promised and dies before he can finally hear Wonder Woman say yes to his proposal. Barry says his goodbyes to the team as Wonder Woman hands him the engagement ring. Barry and Jay enter the Speed Force and send Barry back to the moment that he left. He stops Brainiac’s Kryptonite bullet in time to save his Superman. He tells Superman that they need to be prepared for threats to the Earth and they should start seeking other heroes to form a team. The movie ends with Barry finally committing to Iris with a marriage proposal.

Analysis: Justice Society: World War II was not what I was expecting. Seeing the trailer I figured that it was a time travel/war movie featuring some classic and underutilized DC Comics characters. The movie starts out this way and swerves into multiverse and sea monsters attacking New York. Don’t get me wrong, I really liked the movie. I just wonder if it was better served to leave the time travel/parallel universe elements to a different movie and just focus on the Justice Society.

The JSA are finally getting their due in a medium outside of just comics. They are a big part of the popular Stargirl series and will finally make their big-screen debut when they appear in the Black Adam film. I felt that Hourman, Jay Garrick, Hawkman, and Black Canary almost took a backseat to Barry’s journey.

I still really like the movie. There is a great introduction action scene of Wonder Woman that is very reminiscent of Gal Gadot taking on enemy soldiers in the live-action film series. Matt Bomer did a great job as Barry Allen. Stana Katic added to the legacy of Wonder Woman without doing a Gal Gadot impression. Chris Diamantopoulos was particularly charming as Steve Trevor.

Editor’s Note: Justice Society: World War II is now available on Digital HD, Blu-ray and 4K. You can order your copy, and help support TBU in the process, by heading over to Amazon.

Overall I really enjoyed this film. It starts out as one type of genre but then heads completely into a different genre without missing a beat. Would I have enjoyed a full-on JSA movie more? Possibly, but this movie can definitely fill that void.