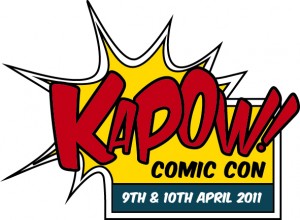 On the 9th and 10th of April 2011 Mark Millar's attempt to bring the San Diego Comic Con experience to the UK will begin. Millar (the writer of Kick-Ass and a major comic book celebrity himself) has got plenty of surprises in store for all the attending fans with loads of panels, Q & A's and celebrity guests turning up from the world of film, TV, games and comics. I'll be reporting back for TBU to give you an insight into what's going on at Kapow over the weekend.

The event does seem to have very little regarding the caped crusader initially but who knows there may be a few surprises once I arrive. We do know that a few Batman comic creators will be there including Frank Quitely, Paul Cornell, Brian Bolland, Peter Milligan and David Hine. So I'll try and catch a few words with those guys. There will also be a DC Superstars Creators panel which I will attend and will hopefully have some news of the future of DC.

The other major events I'm looking forward to attending are firstly the Green Lantern panel which contains a preview at the upcoming summer movie as well as a UK premiere of the DC Comics animated movie Emerald Knights (expect a review to follow shortly). We've also got an Attack The Block panel with director Joe Cornish showing off all the info from his new British sci-fi movie. Thor will have a large presence at Kapow with some of the stars there to talk about what it's like to be a Norse god. Furthermore we've got an E4 panel present which will contain some of the cast of Misfits and they'll discuss the future direction of the superhero show. Finally there's the the top secret Movie X premiere. A mysterious movie that will have it's UK premiere at Kapow. The secret has been kept in the build up to the event with everyone furiously guessing at what could possibly be in store when the projector starts whirring on Sunday. And that's just a select few events happening this weekend, there is a lot more going on and I'll do my best to report on as much as I can.

So I'll be at the Business Design Centre in Islington on Sat and Sun reporting back on all the panels and letting you know what's going on at the very first Kapow event. Keep checking TBU for my updates and let me know via email (nick@thebatmanuniverse.net) or our facebook page if you are attending yourself.