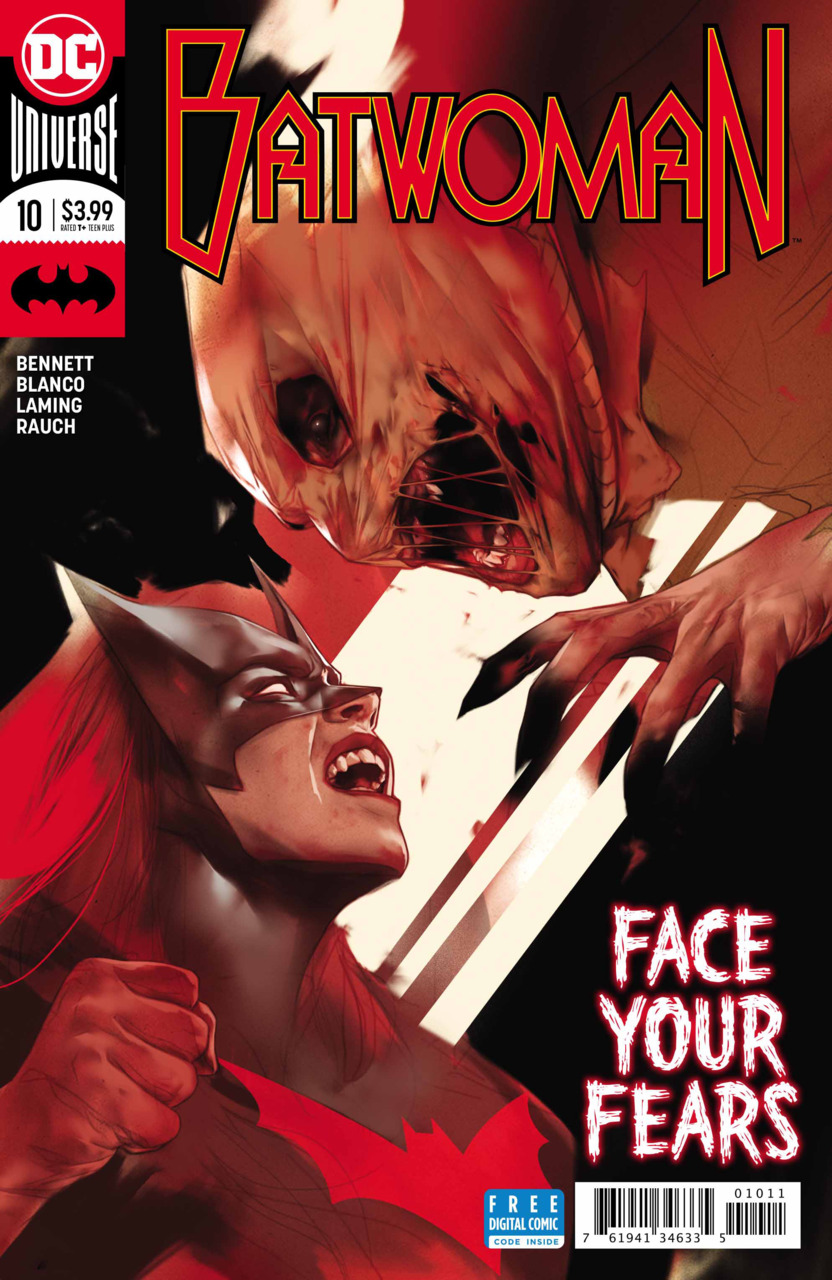 Overview: As Kate defeats Scarecrow, she finally confronts her inner demons and makes peace with them.

Synopsis (spoilers ahead): Continuing from last issue’s battle with Scarecrow, Kate tells him that his efforts to have Kate relive her nightmares like Prime is a mistake. She admits to him that she is her own nightmare, and soon to be his.

While the Scarecrow is on the ground (and being pummeled by her fists), she threatens him by asking “What can Batwoman do that Batman can’t?” With fear in his eyes, she states that “…Batman wouldn’t befriend warlords and killers, but I do. Batman wouldn’t use your poisons and weapons for his gain, but I am. And Batman would never kill, but I…” Scarecrow, while interrupting Kate’s murderous threat, unleashes a fear toxin grenade.

Fatima yells at Scarecrow that he is a cowardly traitor, and that the “Many Arms of Death” will not forget nor forgive his failure. While evading Kate, she communicates with her backup for an extraction. In pursuit, Kate asks her if all this was revenge for Coryana.

Safiyah appears as a hallucination, and Kate stops her pursuit to talk to her. Safiyah gently reminds her that she is not a monster, but the soldier she rescued, healed, and rehabilitated.

As her hallucination clears, Colony soldiers have secured Scarecrows lab with Kate kneeling on the stairs.

After a brief conversation with Colony Prime (who after this whole ordeal, still cannot get along with Kate), her father, Jacob, enters the room. Her father then confronts her on how hypocritical she is. He states that Kate prides herself on being this orderly, disciplined soldier yet voluntarily and irresponsibly used Crane’s fear toxin on herself.

She tells him that she is not afraid of her inner demons, but Jacob disagrees. He states that she is afraid when she is sober. He hoped in training her to be a vigilante (and potential Colony recruit) that it would give her life meaning and purpose, that she would have something to live for. He points out that his manipulative behavior is no different than hers, with both wanting to help the world but in different ways. One with an army of pseudo-Batmen, and the other with teenagers and the rest of the Gotham Knights trained in the tao of Batman himself.

As Kate reviews the surveillance cameras, she realizes that Safiyah was actually there in the lab, and Safiyah let Fatima escape. Kate reaches topside to find a note and rose left by Safiyah. The letter states that to save Kate’s sister, then Kate should go home and stop this hunt.

Analysis: This finale, while having plenty of action, is very dialogue heavy. The defeat and capture of Scarecrow is not the focal point of this issue or even this arc. This arc is about who Kate is and how she views herself.

The previous arc showed Kate’s backstory. She was a broken woman who hit rock bottom (figuratively and literally) and gave up on hope and life. After being rescued by Safiyah, we saw that she was putting her life back together. This arc shows how Kate currently views herself. She sees a woman not who was beyond blessed to have another chance at life, but a damaged monster. She looks to her trauma as a child as the reason for her darkness.

We can compare her to Bruce and see that although both are defined by tragedy, Kate and Bruce are very different in some aspects. Kate is just as capable as Bruce as a vigilante, but Bruce has cemented his identity while Kate has not. She sees the worst in herself. She fights criminals to prove to herself that she is not a monster, that she is not a failure, and that all who enter her life perish.

This arc is about her confronting and overcoming her damage. She monologues that everyone has damage, it is apart of life. If you can own it, then you can defeat it. If not, then it will unravel you. She embraces her damage. She embraces this monster within. She can now move forward and become the hero she needs to be.

I love how Margueritte Bennet wrote this dialogue-driven issue dealing with Kate and her damage. It not only applies to Kate in this comic but also in the lives of the readers; no matter what is going on in their lives, they can overcome the demons and damage within. They can overcome their trauma and find hope.

Fernando Blanco, Marc Laming and John Rauch finished this issue on a high note. The detail in this issue is extremely impressive since Kate is in a psychedelic nightmare. They really went above and beyond with the detailing of wonderland. The color scheme of this issue correlates to the story of the issue. At first, the colors are dark while she is embracing her monster. As she begins to accept to brokenness and damage, the colors are brighter signaling this change in her thinking.

Final Thoughts: This issue closes the arc on Kate’s encounter with Scarecrow and sets up her next mission to against the “Many Arms of Death” while dealing and accepting her damage.