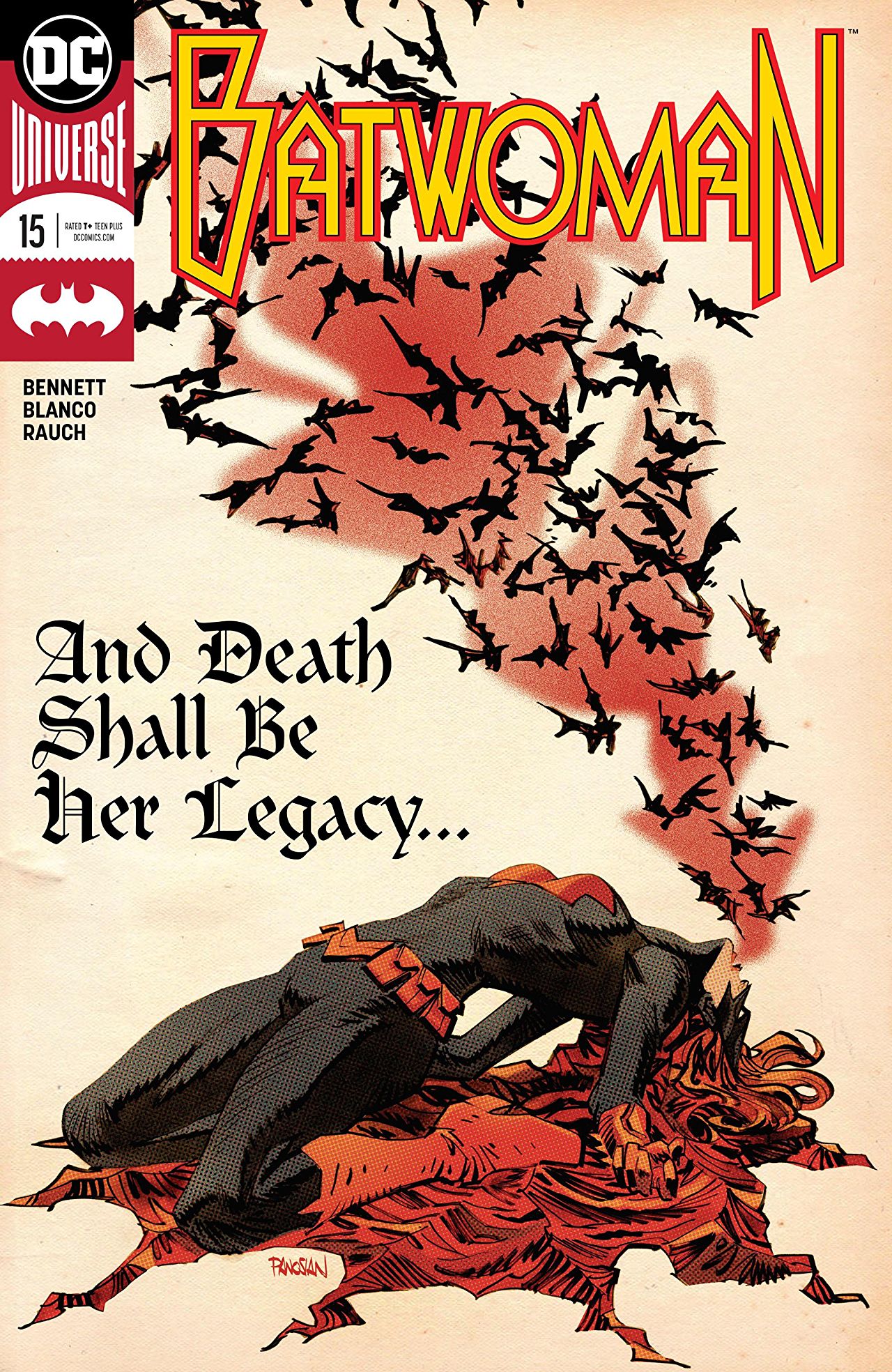 Overview: The Fall of The House of Kane continues with Batwoman finally coming face to face with the mastermind behind The Many Arms of Death, Alice.

Synopsis (spoilers ahead): We open with flashbacks from Beth’s past, who now goes under the name of Alice. The expression on her face comes across as somewhat maniacal as we are treated to a tiptoe through the tulips of her psyche. We get a unique interpretation of the events that led to Beth becoming Alice through an illustration that is reminiscent of something out of a medieval fairy tale. Alice’s recollection of her childhood events depict issues of tragedy and abandonment. In the initial splash panel, Alice tells the story of her mother’s death and Batwoman’s abandonment of her. She tells of meeting up with The Knife and becoming the leader behind the Many Arms of Death. We learn how the Many Arms of Death is planning to unleash a plague onto the citizens of Gotham through bat bacteria. Batwoman has her work cut out for her as she is trying to figure out a way to save her sister, Beth, as well as the people of Gotham. Alice is not making Kate’s job any easier by attempting to provoke Kate’s weaknesses by mentioning the recent death of Clayface over in the pages of Detective Comics.

Batwoman realizes she’s in over her head and is in a race against time so she calls upon the services of her partner, Tuxedo One, or more affectionately, Julia Pennyworth. Kate is forced to swallow her pride and admit that she was wrong for cutting out Julia. The two of them soon discover that finding an antidote could be a realistic possibility after all. Julia begins to get to work by searching the airship database while Kate attempts to handle things out in the field by searching for Alice. As Batwoman closes in on the whereabouts of her sister, the airship carrying Julia Pennyworth flies over displaying various bat frequencies that begin to lure the bats away from the city. As the infected bats are driven away from the city, we find out that Julia is on another vessel as Batwoman detonates the aircraft that the bats were pursuing. This seemingly puts an end to the bat infection problem. As Batwoman verifies the situation with Julia, we find out that Beth has called one more bat into this scenario. The issue ends with everything about to come to a head with Batwoman presumably about to take on the biggest bat of them all, Batman.

Analysis: It feels as if things are beginning to crescendo to a grand finale here. It was great to get the perspective of Kate’s sister, Beth. As is true with Batman, Kate Kane’s relationships have suffered greatly over the years due to her career choices in the military and ultimately in her crime-fighting guise as Batwoman.

I enjoyed the artwork in this issue especially the medieval fairy tale sequence that I mentioned above. The story here is a decent one though I feel as if it has suffered a great deal due to the unnecessarily slow rate it has progressed over the course of the series.

It was nice to see that the recent events of the death of Clayface were finally mentioned in this story. It was starting to feel as if those important little tidbits would go unnoticed in this title which would have been a shame. That single detail should not be left out as Clayface’s murder was in the hands of Batwoman and that plot thread could potentially open up many doors for the Kate Kane character.

Final Thoughts: Overall, this was a decent issue as we get some resolution here with Kate and her strained relationships. The cliffhanger makes you wonder if Batwoman will have to answer for her sins to Batman.