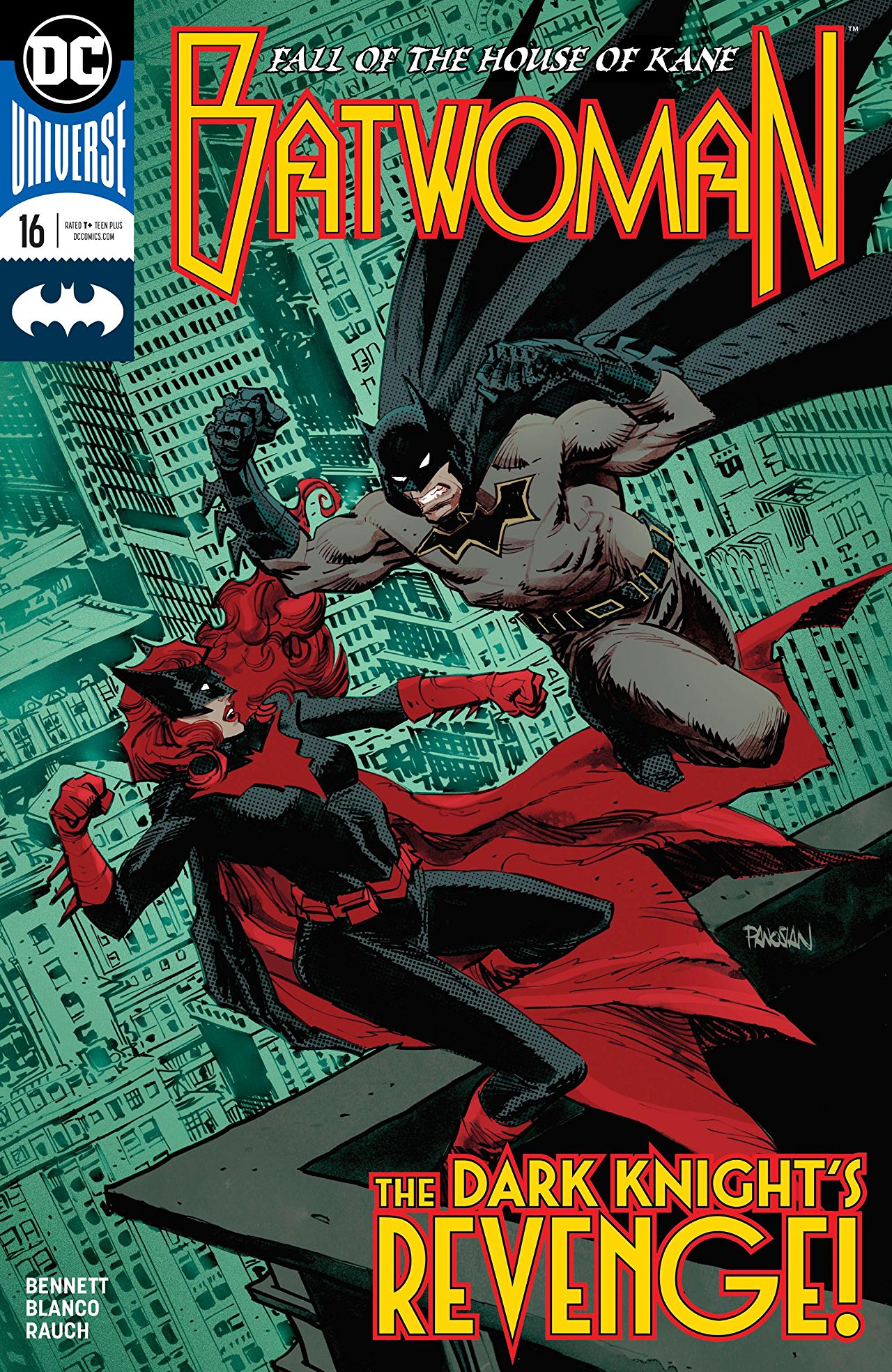 Overview: Batwoman has to choose between her sister and the symbol that she wears on her chest. This prompts a confrontation between herself and the Batman with her disturbed sibling not making things any easier.

Synopsis (spoilers ahead): We pick up where we last left off with Batwoman and Julia Pennyworth having disposed of Alice’s red bat plague. We see Batwoman on the roof attempting to confront her sister, Beth. It is quickly revealed that the two of them are not alone as Batman, himself, has arrived to put in his proverbial two cents.

We learn that it was Tahani that used some drugs on Beth to bring back her villainous alter ego, Alice. It turns out that Alice and Beth are being used as pawns in whatever game Tahani was attempting to play on our unsuspecting heroes. It appears that Alice is holding some kind of remote detonator device in her hand with her finger on the trigger. Batman tells Batwoman that Beth belongs in Arkham Asylum. Batwoman pleads with Batman to not hurt her sister. Alice responds to this by saying that she belongs down the rabbit hole. Alice detonates a hole in the ground and invites the two heroes to play with her.

Seeing that Beth’s cheese has slid off her cracker, Batman informs Kate that this situation is beyond her control and that he will have to take Beth down. As Batman closes in on Alice, we get another twist in the plot where Kate aids her sister in an attempted escape. The two sisters begin to flee on Kate’s motorcycle with Batman in hot pursuit. Batwoman knows she cannot defeat Batman in a fair fight, so she has to resort to some shady tactics in order to achieve the unfair advantage. After cutting one Batman’s grappling lines that was attached to her bike with the Dark Knight in tow, Batwoman drops a giant literal “K” on the Batman. This is only made possible by a distraction in the form of a recording being played on loudspeakers above Batman’s head of the sound of a firearm in the same make of the gun that killed both Thomas and Martha Wayne.

This allows a much needed, long overdue, heart to heart conversation between Batwoman and Batman. Batwoman makes the argument that if Batman puts Beth into Arkham that only Alice will come out and Beth will be gone forever. She then states that they are all related and that he would not be helping the family unit by not giving Beth the psychological help that she needs by incarcerating her. Upon hearing this revelation, Batman then tells Batwoman that she has two strikes now against her in that the first was Clayface back in Detective Comics and now these events. He lets them go and Batwoman falls to her knees in exhaustion embracing her sister, Beth.

Analysis: This issue shows Kate trying to protect one of the few things that she has left; her sister, Beth. While some may view Beth as damaged goods, her path may or may not be a direct result of Kate Kane’s choices. Too often in our legal system, people struggling with psychological illness are locked away with the issues never being properly dealt with by trained professionals. These things are only made worse after prolonged periods of isolation and often abuse.

The artwork remains consistent with each passing panel and issue and writer, Marguerite Bennett continues to peel back another layer on the character of Kate Kane. Reading this issue and seeing this arc to its conclusion, also gave me a better understanding of where Beth is coming from a psychological perspective. Clearly, Beth has some fears related to abandonment with Kate feeling responsible for those issues. What makes Kate worthy of wearing the bat symbol in my opinion, is that she is trying to make up for her past failures and mistakes to Beth by getting her the psychological help that she so desperately needs and taking her home to care for her.

As I read this issue, Batman came across to me like someone with a bruised ego in that he was bested by Batwoman in this confrontation. He also has been somewhat of a self-righteous, judgmental jerk during this whole DC Rebirth initiative. Both Kate Kane and Jason Todd respectively have both been warned repeatedly of their actions, should a life be taken. Granted these are all psychological debates that have raged on for years, but honestly, in all of Batman’s canon, there have been people that have lost their lives indirectly by him. I just find the whole, “Daddy’s here. You kids better act right now.” to be very hypocritical and a double standard. In some respects, I see a lot of similarities and parallels with both Kate Kane and Jason Todd.

Final Thoughts: With this book nearing cancellation, I wonder if DC would consider pairing Kate with Jason in a series somewhere down the line. I would buy it. With all that being said, I do think Kate comes across as a hero and has proven herself as a member of the Bat-Family despite what her detractors may argue. I understand that her methods may have come across as controversial but not everybody is the same. Something tells me that with the conclusion of this arc, that the last issue or issues will be somewhat filler and that we will forget about this whole nonsense in a few months.