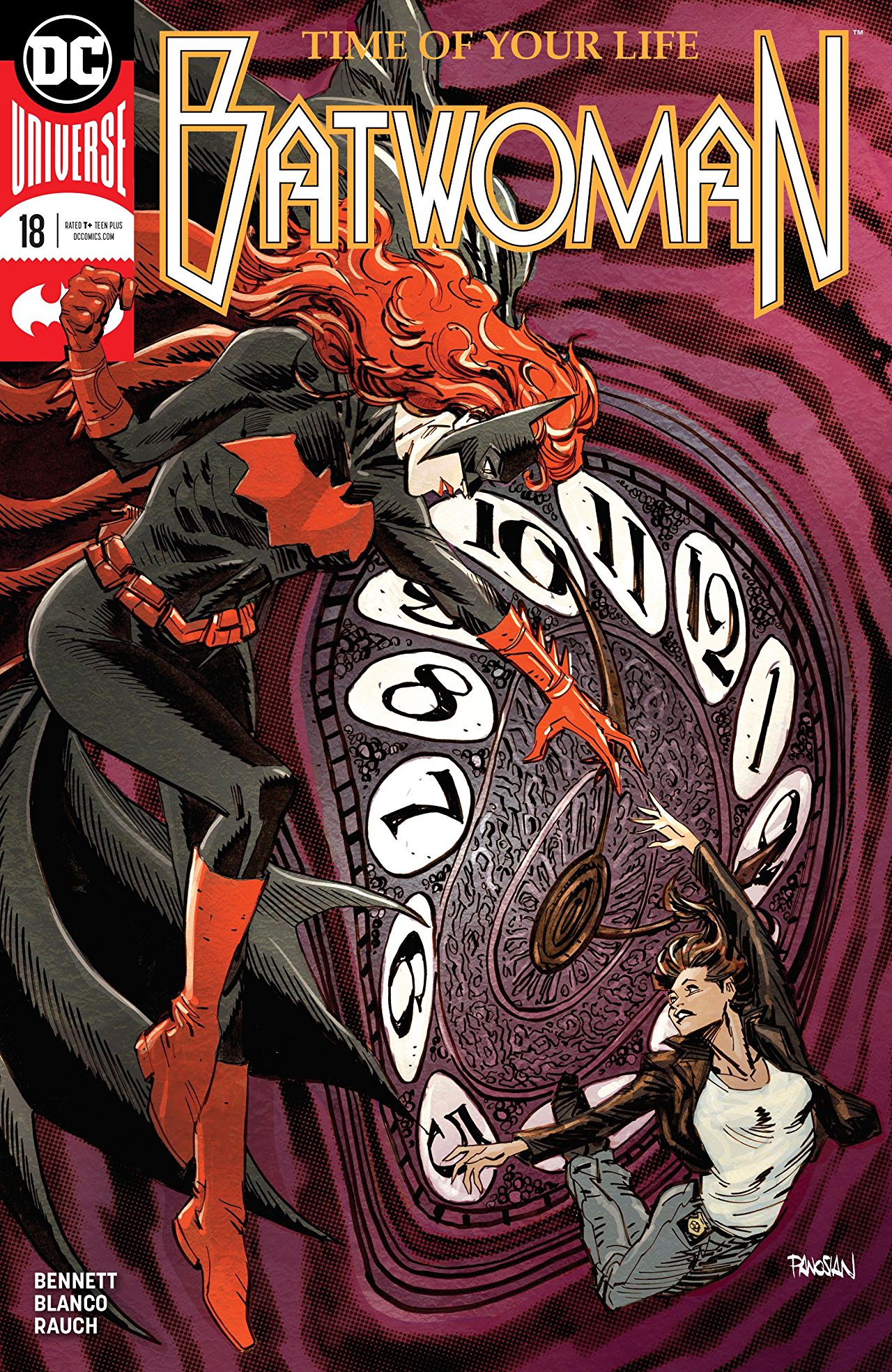 Overview: In the series finale, Batwoman and Renee Montoya face off against the Clock King and his killer robots.

Synopsis (spoilers ahead): The issue opens with Kate changing out of her suit into her Batwoman costume as she and Montoya are surrounded by Clock King’s clock-faced robots.  Batwoman fires off her grappling gun and swings around the ballroom, taking out robots while she confronts Clock King about how the drug he is peddling, Kairos, doesn’t show its users the future as it claims.  As Batwoman and Montoya corner Clock King, who attempt to bribe them with his drugs, claiming that back they do indeed tell the future.  Batwoman and Montoya reject his offer, calling him a fraud and Clock King is captured.  Batwoman changes back into civilian attire and walks Montoya home, where the two agree to go on a new first date.  The issue ends with Batwoman reflecting over the last year of her life and standing over the city, as a new day dawns.

Analysis: It’s clear in reading this issue that writer Marguerite Bennett was more concerned with character then she was with the plot in crafting this issue. There’s no question that the issue is meant as a way to give the series a satisfying ending as well as to hint at where the character could go from here.  I also appreciate that the book is taking a more hopeful tone then we are seeing in the other Bat-Books.  Don’t get me wrong, I’m all for a brooding Batman, but I think there is a tendency for the whole line of books to adhere a little too close to this tone and it’s nice to see that the series is ending on a hopeful note that I think sets it apart.

That being said, the plot of this issue is completely irrelevant.  There’s no challenge to taking on the Clock King in this issue and his appearance doesn’t serve to teach Kate or Renee anything or give either character something to overcome.  The drug that he is peddling has a vague thematic tie-in to Kate Kane taking in the past while looking towards the future, but also seems perfunctory and doesn’t factor into the plot in any real way.  If Kate was conflicted or directionless and tempted to take the drug, or if it was forced into her system somehow and gave her a glimpse of something she had to deal with, then I would see the point, but as it stands, it just feels like a heavy-handed thematic tie-in to a characters’ inner monologue.

I like the sentiment presented here, and I really do appreciate that they didn’t force some contrived reason why Kate and Renee rekindle their relationship now that Kate is in a better place, but I can’t help but wonder if there was a better reason to go about executing it.  Instead of a half-baked and forgettable villain plot, why not put Kate and Renee in a room together and have them talk things out.  There’s nothing in the story about the two avoiding each other, so it is not like the creators have to come up with a reason to put the two together. It would provide the same opportunities for flashbacks to the last year of Batwoman’s life.  As it stands, this issue feels like one issue stretched into two.  I also feel that the story missed an opportunity to end the story at a far more natural point, with the great full page of Renee looking down from her window at Kate after they agree to pick things back up.   I love a good superhero on a gargoyle end to a story, but for a smaller and more personal story, it feels like the wrong end to this story.

I did enjoy Fernando Blanco’s art and John Rauch’s colors, which I think are well suited to this character.  Batwoman’s costume is a study in contrasts and I like the way they play with the blacks and reds through the issue.  And as much as I found it unnecessary, the image of Batwoman standing over Gotham as the sun rises was a standout.

Final Thoughts: It’s weird to argue that a comic book would have been better served to have the main characters go for a coffee instead of punch a supervillain, but I think it would have served what I think the creators wanted to accomplish better than what is presented here.  That being said, I think that this series ends with Batwoman and her world at a good place.  With a TV series on the horizon, we have certainly not seen the last of Kate Kane.