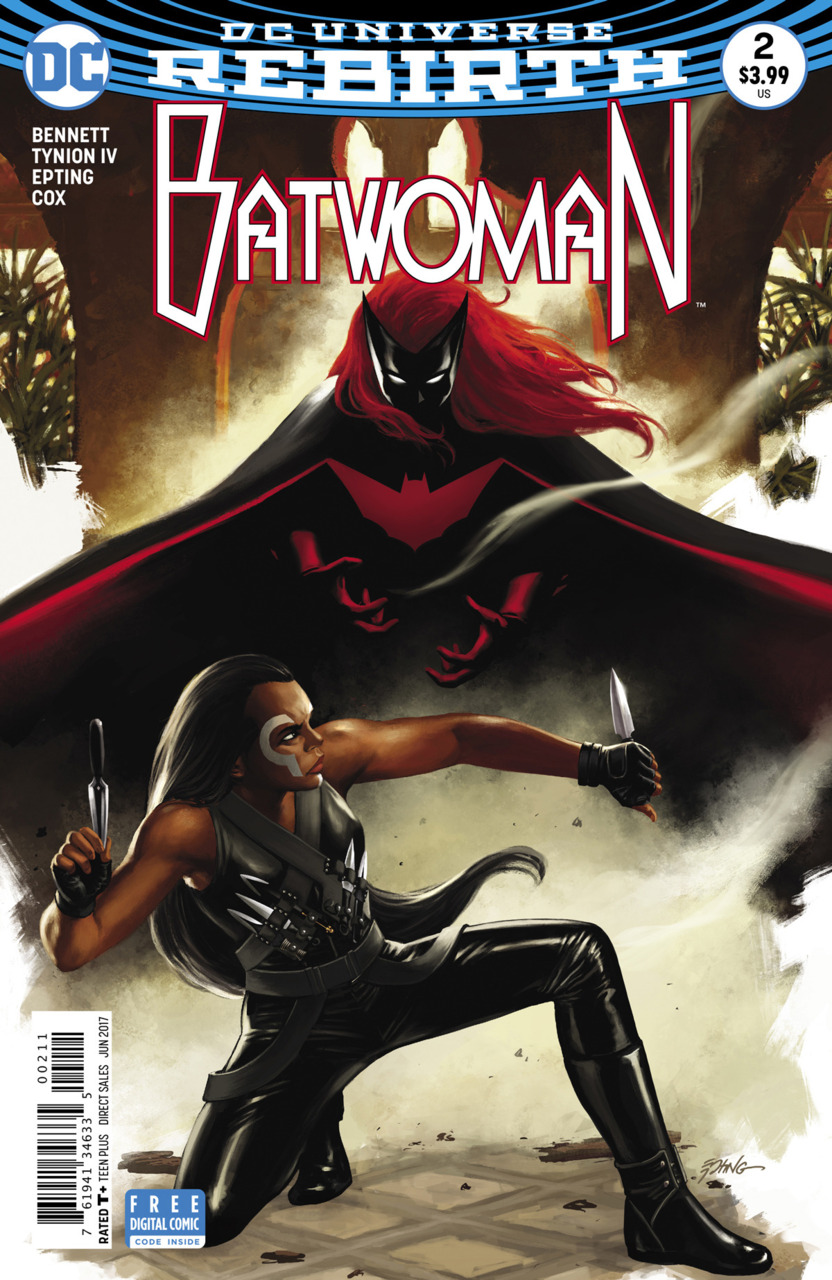 In Brief: In the island of Coryana, Batwoman faces the assassin from the Bazaar, the Knife, whom might be the connection between her past and The Many Arms of Death.

Summary (spoilers): We are taken back to Kate’s Lost Days as she remembers an afternoon spent with Safiyah under Coryana’s sun. Surrounded by roses, Safiyah explains the name of her bar, “The Desert Rose”, to Kate, as Rafael comes to inform that it is time for the gathering with her warlords.

In the present, Kate is holding Rafael’s dead body, seagulls flying around them. She decides to cut communication with Julia, who sends three “babysitters” after her. Climbing up the hill to The Desert Rose, Kate remembers Safiyah’s warlords. Coryana used to serve as a smuggling port, with Safiyah keeping all of the traders – the warlords – in order and peace. She served as their counselor and friend.

As Rafael’s body is settled on the counter of The Desert Rose, Batwoman is attacked by the same woman who killed her target in the Great Bazaar of Istanbul. She turns out to be one of the warlords of Coryana, Tahani, now calling herself Knife.

Batwoman battles her, and while they fight the three “babysitters” arrive in the form of three drones. One of them lights up the lantern of The Desert Rose, which Safiyah used to rally her warlords to her. They arrive as Kate is being throttled by Tahani. She leaves, accusing Kate of being responsible for the death of Coryana.

Later, Batwoman and the warlords are gathered beside the lantern. She inquires where Safiyah has gone, a question to which they have no answer. What they do know is that her leaving allowed for the outside world to enter Coryana by means of the KALI Corporation.

Cut to the headquarters of KALI and their CEOs – a blond man and a brunette woman who are only shown from the back in almost all of the panels they appear. Standing in their office is Tahani, and, from the symbol on the wall, the company seems to be a façade for The Many Arms of Death.

In Depth: This issue left me with mixed feelings. While it has some great moments, such as the introduction of new characters and some revelations regarding the Many Arms of Death, it has some grave flaws that didn’t let me enjoy it to its full extent. It is a flashback within a flashback, but the art style doesn’t change to let the reader know it. In fact, there is nothing in that first page to warn us of what it is. What bothered me most was the inconsistency in the use of graphic language to convey meaning. A good example of such use done masterfully is Dark Night: A True Batman Story, written by Paul Dini with art by Eduardo Risso, in which Risso uses different styles to show the real world, Dini’s imagination and his childhood memories.

Continuing on the graphic realm, Steve Epting’s backgrounds and architecture drawings put me off a bit. The angles in the bar scene were inaccurate and the panel showing the headquarters building of KALI looked artificial, its perspective faulty, the lighting inconsistent with the city lights. For the lights, I don’t know if Epting is to blame or Jeromy Cox, the colorist. The city view from the main office looked like a picture that was simply pasted on the background, as did the marble texture. The light pattern on the floor was inaccurate as well – in the night, there wouldn’t be light shining from the windows, but rather at the windows.

What Epting is really good at is drawing nature. The Coryana scenes look stunning. I never knew rocks and plants could be so well portrayed in a non overly realistic style. Also, his greatest strength lies on his human figures. He doesn’t rely on hair color or clothes to make the characters recognizable – a stunt pulled by a lot of artists in the industry -, he actually does portray them different from each other. This is what helped to build one of my favorite pieces of this issue: the warlords.

Song Tae-Ri, called the Black Flag; Deadeye Dick, who you should avoid; Bruno Bwana Brewster, the Bruiser and the gentlest of them all; Adelaide Stern, assassin. Tynion and Bennett had me with just a few words accompanied by Epting’s amazing character design. I would love to see more of those characters and read more about their smuggling and crime adventures, but I don’t think we will get it. Besides, I would love to know what might have happened to Bruno for him to become mute. He seems to be singing an opera at his first appearance, but he communicates through sign language in his later appearance. Or I am just reading too much into this.

Another positive point in this issue is that Tynion and Bennett are keeping the theme of Kate destroying everything she comes to love, a theme that was hinted at the Rebirth issue. Tahani accuses her of murdering Coryana, the warlords accuse her of having softened Safiyah. They are also keeping Kate’s crazy gadgets. Since the new 52, Batwoman has been even more about gadgets than Batman is, and her glove melting Tahani’s mask further proves it. Batman would have just punched her in the face; Kate is smoother.

However, there were some issues with the plot, namely the deus ex machina of the lantern of The Red Rose. Julia Pennyworth could not possibly have known that the lantern was the rally call for the warlords, and that by lighting it there would be help coming for Kate.

I would have been happy with the issue despite all of the problems, but the authors handed me a piece of candy by leaving a little clue on the involvement of KALI with the Many Arms of Death, and it is not their symbol. One shall not spoil another’s experience though, so I will not tell what it is.

Overall: This is a flawed issue, but the negative sides are outweighed by the positive. With compelling new characters and some revelations made about the main threat, Batwoman #2 is an essential plot point for this story arc.