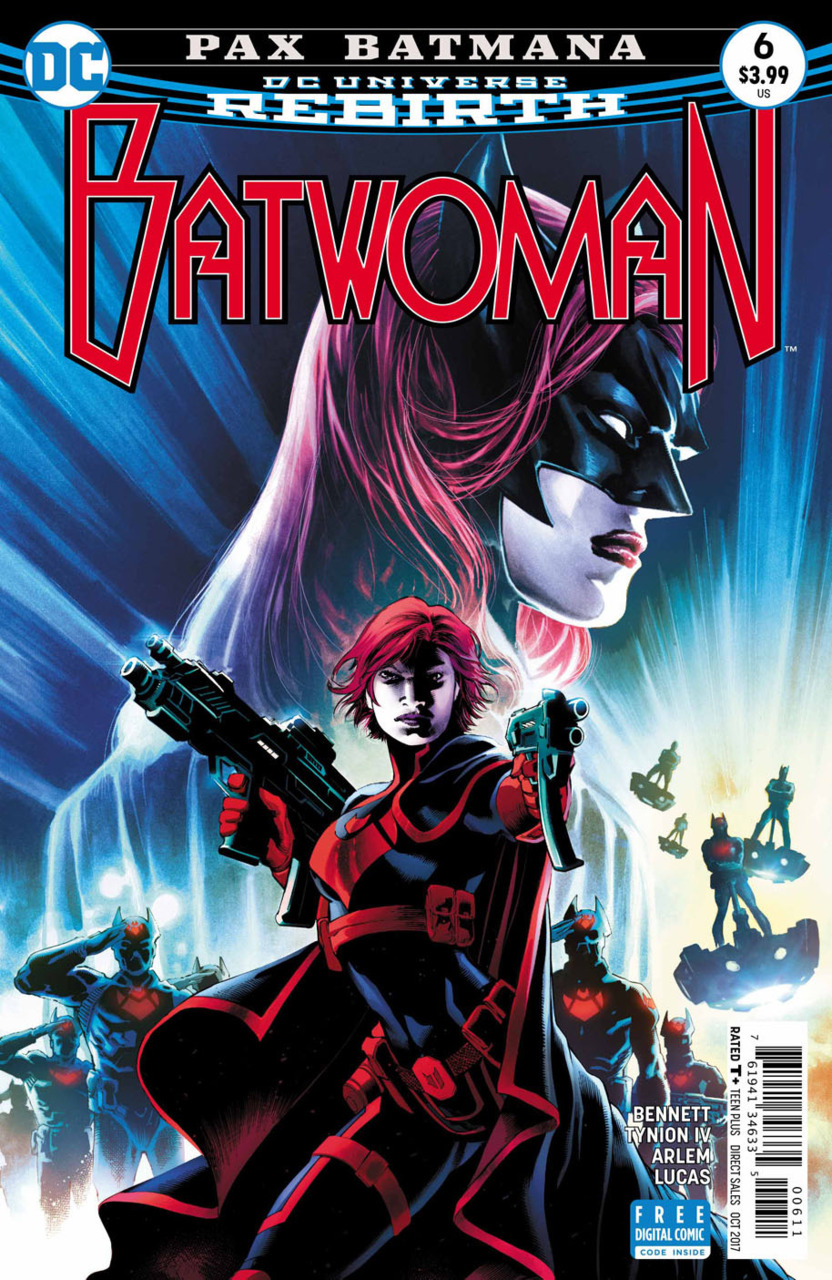 Overview: In a dystopic future, Batwoman and Red Hood take it upon themselves to stop the dictatorship established in Gotham by the new Batman.

Synopsis (spoilers ahead): The first two pages take us back to the first time Kate came face to face with Batman as she contemplates the importance of the bat symbol. We are then taken to “Year five in the reign of the Bat”: Bruce is dead and that the new Batman has turned the meaning of the symbol on its head. Kate is watching Gotham, flying high above the city from a Colony aircraft. Flying with her is Jason Todd, wearing an eye patch and walking with the help of a cane. They are both much older.

Shots are being fired at the city to draw in the new Batman. Kate confesses that she hasn’t stepped on Gotham soil since Julia’s funeral. Since their plan is not working, Kate decides to go in alone to Gotham. She flies by drones and a Bat army as she heads towards “Free Gotham”, the last zone free of the Bat.

We are shown the Police Headquarters as Detective Bullock and Renee Montoya, now commissioner of police, are heading out, talking about how the Bat symbol changed from a beacon of hope to a bad omen. Renee gets to her apartment and Kate is in there waiting for her. Kate comments on how worst the city had gotten since her last visit and Renee says that she has been doing all she can to keep Brother Eye away from Gotham. Kate asks Renee for help taking down the Bat regimen, called Pax Batmana. Renee comments on how the Batman has vanished, how it reminds her from back when the drones first came, 10 years before.

Three Bat soldiers burst through the windows declaring war on Free Gotham for making contact with the Colony. Kate and Renee fight them, but Renee gets shot and the soldiers flee. Kate begins babbling as she tends to Renee, tells her that this was all her fault for having pushed him too far, for having pulled the trigger. Renee says that Kate will now have to go all the way, that she will have to kill the Batman. The issue ends with Kate promising Renee that she will kill Tim Drake for what he has done to the city, and it is implied that Tim is the new Batman.

Analysis: After the extremely character-driven story that was told in issue five, we get a very grim and action packed issue. This is one of those that are very hard to analyze objectively. Firstly, this is more of a Detective Comics story than a Batwoman story. It is hardly connected to the previous arc or the one to come, it connects only to the Rebirth issue and it will be continuing on the pages of Detective. It is no coincidence that this was Tynion’s last issue on the title.

The fact that this dystopic future is happening within continuity has me worried about the implications, which are far reaching and very serious for the Batman mythos. Let us start with the Bat-Family. Jason is depicted much like Dick is usually depicted in the Beyond-verse, with an eye patch and holding a grudge against Batman. In this case, though, Batman is Tim. Before we get to Tim Drake being a dictator, I cannot help but bring up the fact that the rest of the family is not mentioned in this issue. This had me wondering where would Dick and Damian have gone. It is not that the other members are not important, but those two are the most obvious heirs of the mantle and their absence will surely mean something. This, I hope, will be answered in the pages of Detective Comics once we get to The Fall of the Batmen in November.

And then there is Tim. Not long ago, Tim Drake was donning the cape and cowl in the pages of Batman Beyond. During Future’s End he took the mantle after Terry McGinnis’ death and fought against Brother Eye. In this timeline, he had traveled in time to avoid a war with Earth 2, causing ripples through reality. In the future presented here in Batwoman, Tim Drake is once again the Batman of the future, but he seems to be aligned with Brother Eye. Something is fishy. Either Tynion (I am putting this on him since this issue reads as something majorly written by him) has made a huge misstep with the Tim Drake character or there is something we are not yet seeing. Considering how big of a Tim fan he is, I put my coins on the second one. Renee even comments on how the Batman is missing, a clue that something has gone wrong.

In fact, there were bits of clues to what has happened sprinkled all over this issue. A shot that Kate fired and that supposedly has changed something, Jason being badly injured, Julia and Bruce being dead. It leaves me wanting to get to November already and read what is to come.

As for the art, Renato Arlem’s style reminds me of Steve Epting, the artist who worked on issues #1-4. The heaviness of the lines is not much appealing to me, and the panel layouts are sometimes not the best – I particularly found the panels on the fight scene clunky, and the amorphous Gotham silhouette on the last page was a little misplaced. Arlem’s strengths are in his capacity of conveying movement and facial expression. The characters actually look like they are talking to each other, moving, fighting. Batwoman’s costume also looked gorgeous, heavily resembling the Star Wars’ costume design. Also, his old-man-Jason is right on point. Final Thoughts: I had mixed feelings about this issue. It didn’t read as a Batwoman issue as it is disconnected to the other arcs, but it still fulfilled its function of making me crave for what is to come in Detective Comics. Also, I am not at all sold on the Tim Drake being a dictator idea. It is so far fetched that it has to mean something more.

The Fall of the Batmen will be continuing on November in the pages of Detective Comics.