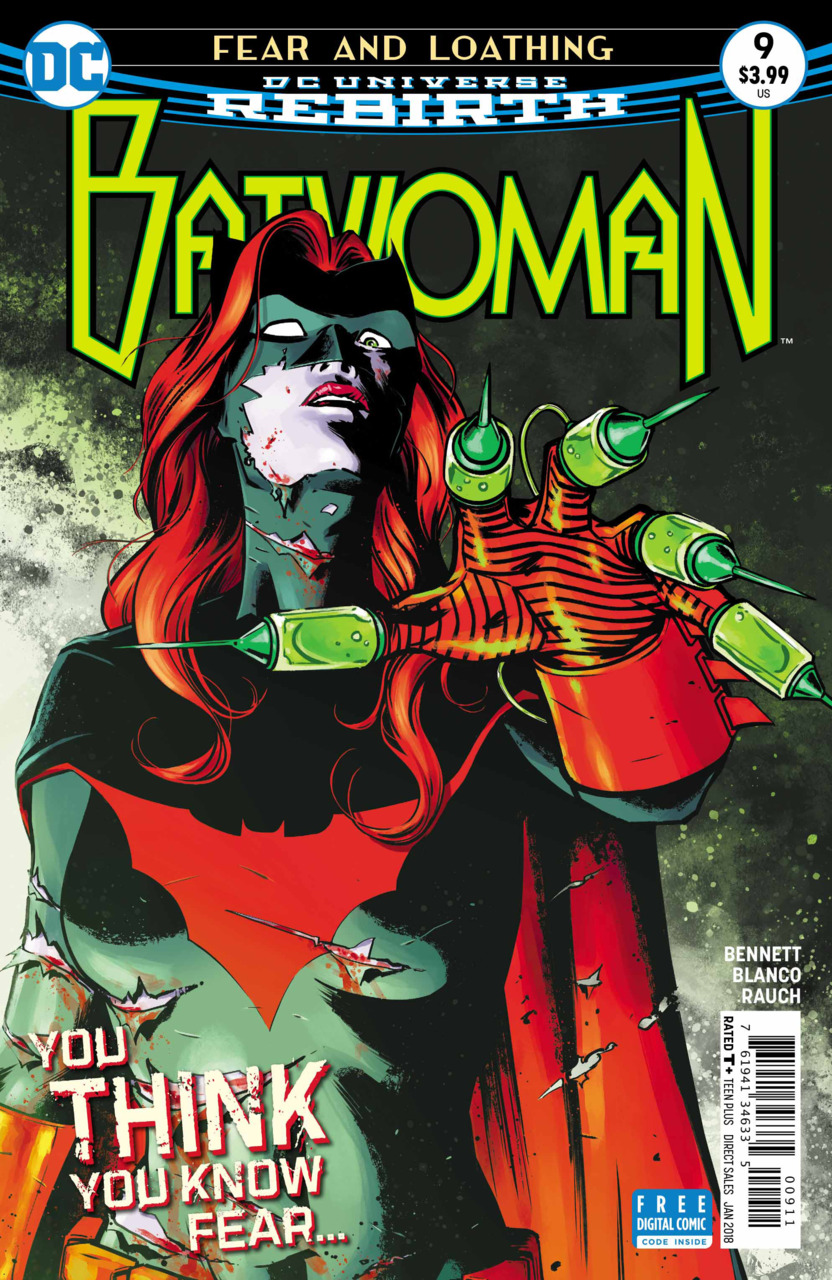 Overview: Batwoman and Colony Prime, while drugged by the Scarecrow, try to escape his facility and their hallucinations.

Synopsis (spoilers ahead): This issue starts with the creepy twins who were the CEO’s of the Kali Corporation in a video call with Fatima, the woman in charge of Dr. Crane’s lab. The “Many Hands of Death” is extremely interested in Crane’s work and how his fear toxin with psychedelic compounds affect Kate.

In their respective hallucinations, Colony Prime sees an old-school video game while Kate sees a twisted, horror movie version of wonderland. Still in Crane’s lab, Kate and Prime look for his helmet. Crane states the bat symbol is not the totem of fear but instead that he can truly instill fear in others. Kate grabs a skull, which is evidently an explosive, and blows a hole in the lab so that her and Prime can escape and regroup.

Prime playfully calls Kate his sibling since he spent many years training and serving under and along Jacob Kane, Kate’s father. After a brief disagreement, Kate connects Prime’s helmet to wires from the wall so that they can send an SOS to the Colony.

Scarecrow and Fatima enter into the lab where Kate and Prime are. Prime then falls to his knees wishing for a person named “Lani” to not put on the uniform. Kate consoles Prime and realizes that Scarecrow pumped more fear toxin into the room. Fatima takes a distraught Prime out, leaving Kate to fend for herself.

Jacob Kane and the Colony receive the SOS signal and heads to their location. While trying to help Prime recover so that they can escape, Kate grabs Prime’s helmet and sees that it holds a photo of him and his daughter inside it. This triggers Kate into reliving the murder of her mother and sister.

Scarecrow monologues how Kate is a failure and how everyone who is around her dies. Kate resolves to no longer live with guilt, but to own it. She admits that if she keeps living with this guilt, it will consume her. She calls out Scarecrow for trying to torture her by having her relive her nightmares. She counters with how she has lived her darkest fears. In her trauma, she got back up; she did not let her past bury her. She always got back up. She then states that she has embraced her fears, that she has become something else. She then asks Scarecrow if he is afraid, because she is embracing the monster within and ready for attack.

Analysis: This issue picks up directly after the previous issue. Although filled with “Alice in Wonderland” motifs, this issue is about a different story. This issue is about overcoming trauma. In previous issues, we have slowly learned about Kate’s story and the survivor’s guilt she still carries. While Scarecrow is the villain of this issue, but the real adversary is Kate. The only obstacle blocking resolution over her mother’s and sister’s deaths is herself. She clings to this pain and Scarecrow sees it too. He preys on this weakness, making Kate confront these nightmares in order to break her. Instead, he unwittingly made her accept her pain.

The subtle comedy in this issue was a breath of fresh air in this serious, psychic issue that is focused on fear and death. Kate has few, but greatly timed one liners in this issue. Although this issue starts off the creepy twins, the best “sibling relationship” is Kate and Prime. There were many sitcom-ish moments when they would have arguments that were natural and made sense. Given that Prime has spent many long days with Jacob Kane, he does have this pseudo-son relationship with him. It is comical when Prime asserts that he is more of Jacob Kane’s son than Kate herself.

The most defining moment though for this issue is the conversation she has with herself on the second and third pages of the issue. Trying to not succumb to the fear toxin, she reminds herself with these epic, Frank Miller-esqe words: “I am the @$%#*!!#$ Batwoman.”

The creative team had their work cut out for them this week, and did they deliver! Marguerite Bennett wrote the Kane/Prime dynamic well and showed us how Kate’s past haunts her through her inner monologue throughout the issue. Fernando Blanco did a great job drawing a psychedelic nightmare. Either intentional or unintentional, Kate is drawn cleaner, and crisper than the other characters in this book. This adds to the fact that Kate is the centerpiece of the issue and we are seeing the world that she sees, a nightmarish hell.