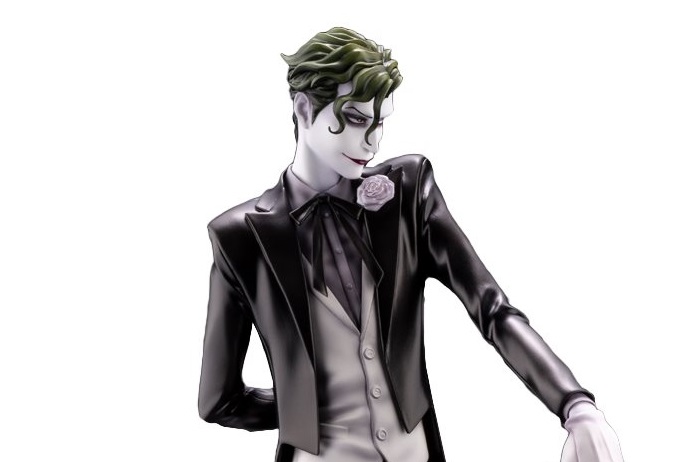 Kotobukiya’s latest statue, as part of the Ikemen line, has been announced as a Previews exclusive for San Diego Comic Con. The statue features Joker and has him in an original Japanese Ikemen (“handsome men”) style. The statue is limited to 504 pieces. It is priced at $114.99 and is expected to ship in August 2020. You can preorder the statue now at Entertainment Earth. Joining Kotobukiya’s Ikemen lineup is the Dark Knight’s arch-enemy – The Joker! The Joker appears in this extraordinarily limited edition statue, exchanging his trademark purple suit for a chic monochrome color tuxedo. Wearing a mischievous grin and holding a long staff and a joker playing card in each hand, this DC Comics The Joker Ikemen Limited Edition Statue – San Diego Comic-Con 2020 Previews Exclusive perfectly illustrates the measures Joker will take to get the final laugh. There’s something to see from every angle on this stylish statue, and it’s a limited edition of just 504 pieces. So, get your order in right away so you don’t miss it!

Kotobukiya’s Ikemen series continues to amaze fans around the world. Similar to the popular Bishoujo series, this fantastic expansion is a lineup of popular characters re-designed by famous illustrator Ricken in the Japanese Ikemen (“handsome men”) style.