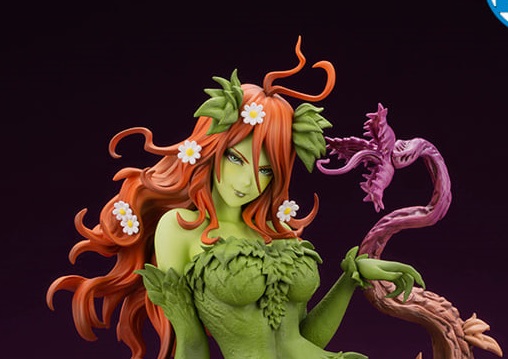 Kotobukiya has released details for their latest Bishoujo statue, which features an updated version of Poison Ivy based on the art by Shunya Yamashita. The statue measures over seven inches tall and is part of a limited run of fifteen hundred pieces. It is priced at $125 and is expected to release in July 2021. You can preorder the statue over at Entertainment Earth.

The bewitching yet gentle look of the DC COMICS POISON IVY RETURNS statue is now available in an all-new rendition! This new POISON IVY RETURNS statue gives off an even more villainous vibe than before. The sculpt of the statue made by Yoshiki Fujimoto is the same as the regular BISHOUJO statue, but the expression on her face now shows glimpses of her dangerous thoughts.

The green skin and red hair from Poison Ivy’s original appearance in the comic books have been recreated, and the giant plant monster she sits on has been given a new, more poisonous coloring!

Customers who also own the standard version will be able to enjoy the differences between the two statues.

This statue is a Diamond PX Exclusive for customers in the US! Make sure to preorder early with your favorite specialty retailer or comic store!