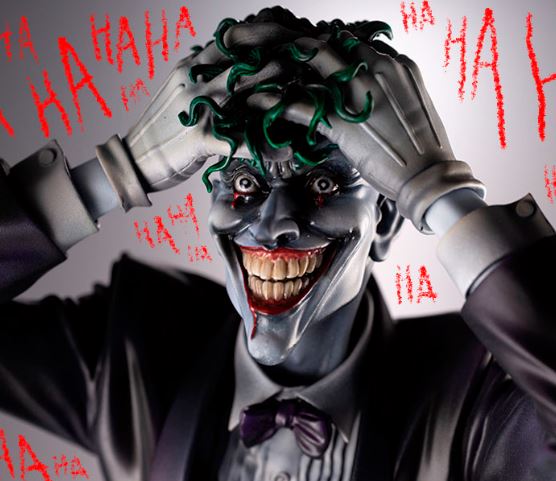 Kotobukiya has released details for their latest ARTFX statue which features Joker based on his appearance in Batman: The Killing Joke. The new one-sixth scale statue features Joker standing in the rain laughing measuring about twelve inches tall. It also features a base reflecting the final moments of The Killing Joke story. It is priced at $160 and is expected to ship between January and March 2023. You can preorder the statue at Entertainment Earth or Sideshow Collectibles.

Batman: The Killing Joke was released in 1988 as a particularly special piece among the one-shot graphic novels. This epic work had a tremendous impact on the films and comic books that succeeded it, and it is indeed the third time Kotobukiya is releasing a statue from it.

One day, having lost all emotional support, a Red Hood Gang member is being hunted down by Batman. Cornered with nowhere to run, the man jumps into a river in a frantic attempt to escape. However, chemicals in the water from the Ace Chemical Processing Plant bleach his skin white, his hair bright green, and his lips red. Seeing his reflection in the water, the man stumbles to his feet and lets out an endless howling laugh, thus transforming into a madman.

Kotobukiya worked hard on bringing this whole unforgettable sequence to life. From the worst of his many terrible tragedies, The Joker from his “one bad day” has been vibrantly reimagined into a statue.

The coloring was done based on the 20th-anniversary monochrome version of the graphic novel, which featured recoloring by the artist himself. This statue includes a special base and can be displayed straight out of the package.