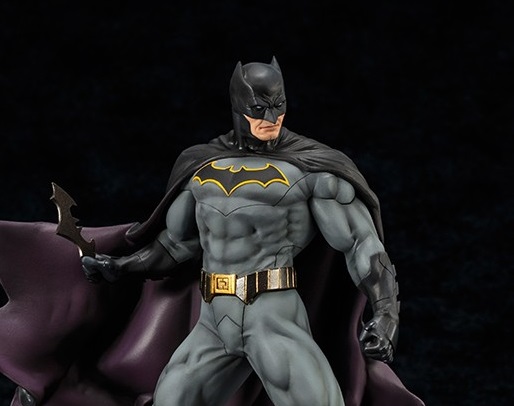 Kotobukiya’s newest ARTFX+ statue is based on the most recent Batman designs from the Rebirth line of books.  The 1/10 scale statue features stunning details including the trademark Batman scowl, detailed chest emblem and billowing cape. With a batarang in hand, this Batman statue stands ready to strike down injustice in Gotham City.

Kotobukiya turns to the newest Batman comics for their next Batman ARTFX+ statue with Batman Rebirth! Following the end of New 52, DC Universe begins a new story with Rebirth. Continuing the lineup with Superman and Super Sons comes the Dark Knight from Gotham, Batman!

This 1/10 scale pre-painted statue is sculpted in detail from his serious face, mask, the emblem on his chest to his flowing cape and new utility belt. Batman poses with his bat-a-rang, ready to strike down anyone who threatens his city.