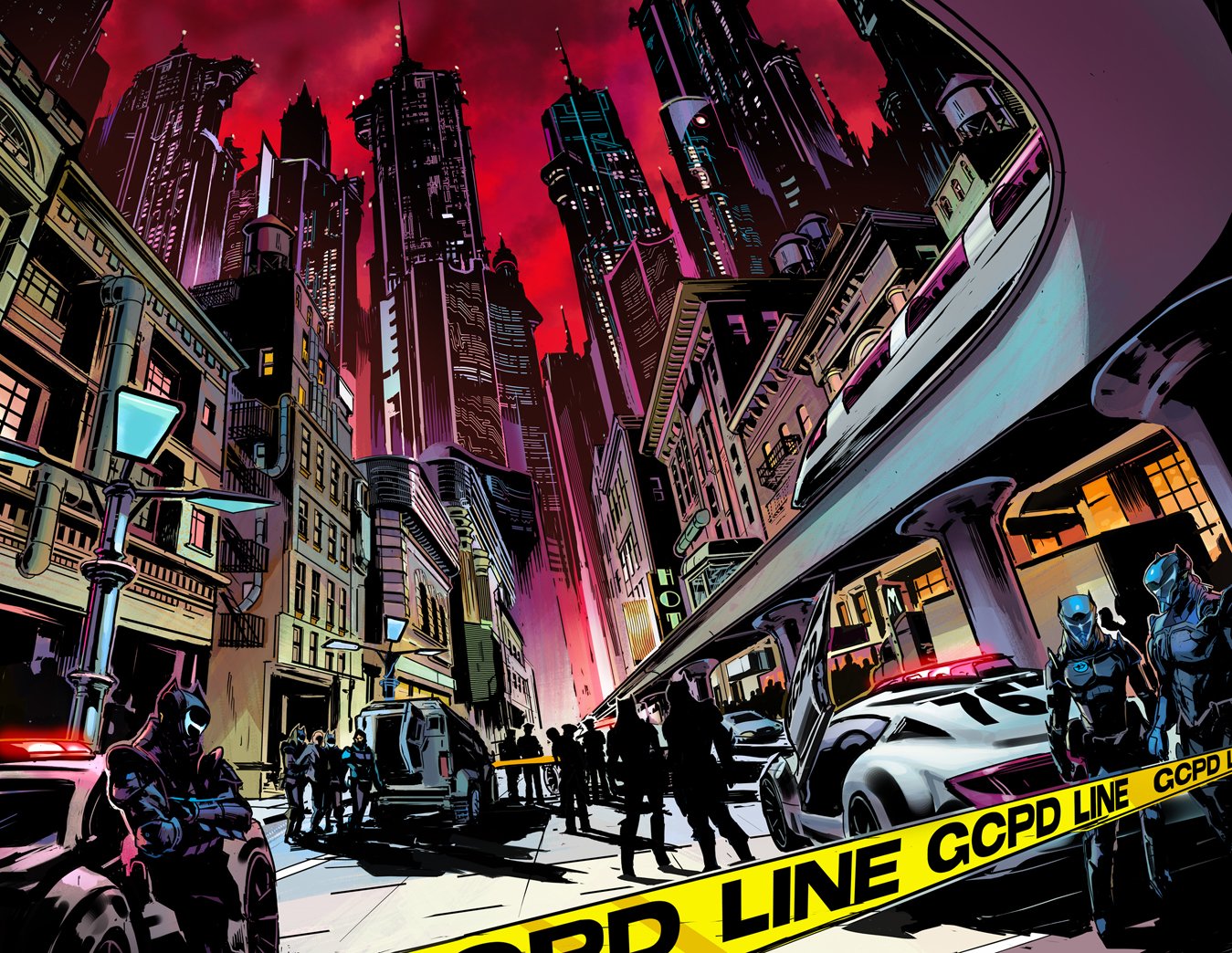 I’d like to start this week’s article with a thankful prayer to Camazotz for not killing this weekly column and allowing us to get to the tenth edition of This Week in the Batcave. For those who are not familiar with him, Camazotz was the Mayan god of death and sacrifice, especially blood sacrifice, and he took the shape of an anthropomorphic bat. And I tell you, I am not the first one to associate it with our own Bat-man. During the celebration of the Dark Knight’s 75th anniversary, Mexican artist Kimbal made a Camazotz inspired cape and cowl that looks absolutely stunning. You can check the entire process in the artist’s Behance page (the introductory text is in Spanish, but the images speak universal tongue). And speaking of anniversaries, this week marked one year since DC: Rebirth #1 came out. It has been a quite crazy ride thus far, but the greatest mystery around is only going to start being unraveled in November’s Doomsday Clock. Meanwhile, we have another big event on the horizon. Wonder Woman will finally be reaching the big screens this coming week, but the premier screening sessions are already happening. Some of the creators involved with DC have attended some of those screenings, but what has caught my attention was this shot made by TONY DANIEL of the credits of the movie. It seems that all creators whose comics have somehow influenced the plot are now being credited, not only the character creator, which is only fair. The way I see it, this kind of attitude strengthens all of the creative industries. And to think that it took so long for Bill Finger to be credited as a Batman creator. We’ve come a long way, folks.

Talking about moving pictures, Batman and Harley Quinn trailer has come out this week and it looks like it will be a very fun watch. Plus, it will mark the return of the original Batman: The Animated Series dynamic duo of Kevin Conroy as Batman and Loren Lester as Dick Grayson/Nightwing. There is still no official release date for the direct-to-video, but it will probably come out this summer.

If you have followed The Button you know that, by the end of it, we have a slightly conflicted Batman after receiving a very poignant advice from his father: leave the mantle, go live your life. When asked about what he is going to make of it, TOM KING has answered that this moment will be leading into “The War of Jokes and Riddles”. Which… was supposed to happen in the past? You and I are not the only ones confused by this, and we should not rely on King for clarifying this confusion. He actually only created some more by stating that “The past creates the present, just as the present sparks our search for the past, for answers.” It almost feels like watching Grant Morrison talk about life and time but with fewer LSD trips involved. Worth watching, if only to revel in the rhythm of his accent. And to illustrate this section we have FABOK’s studies on the Joker, one based on Brian Bolland’s take and the other on Capullo’s. Even Fabok knows we can always learn from the masters, kids.

If you follow the solicitations you will know that Zatanna will be guest starring in the upcoming arc starting with issue #958, “The Intelligence”. She will be staying for a while in the title, as RAFAEL ALBUQUERQUE’s variant for issue #963 proves. Asked for a tease on what is to come, JAMES TYNION has revealed that we will be getting a glimpse of teenage Bruce Wayne and Zatanna training under Zatara’s guidance, Animated Series style. This was revealed during one of Tynion’s usual surprise Q&A sessions on Twitter. Another piece of information that has risen was that Detective Comics’ readers should probably check out Batwoman #6, his last issue on the title, coming out August 16. Also, when asked about the importance of the Bat-Family for Batman, Tynion showed himself to be of the same opinion as MITCH GERADS, made clear in his Batman #23 little easter egg (which we talked about in the last Week in the Batcave): the family that Bruce built is a way of putting back together some of his pieces that got scattered when his parents were killed. A trio of Bats from our trio of artists. First a half finished, crouched down Bat from SEAN GORDON MURPHY; second a sneaky Bat from SEBASTIAN FIUMARA; and lastly a pirate Bat from RAFAEL ALBUQUERQUE (whose process we can glimpse in this video shared by the artist). CAPULLO’s torrent of drawings continues to flow as this week he worked on a cover for Metal. We got Cyborg, Batman, Superman and Wonder Woman. The Themysciran princess got an art spotlight with a before and after showing some minor changes made in her expression that could only bother someone with as much experience and skill as Capullo. Can you notice the difference

The two posts we have for Batgirl this week are by chance made by the duo running for the Eisners: RAFAEL ALBUQUERQUE, who is actually no longer on the Batgirl team, got a letter from DC congratulating him on being nominated for the award, and HOPE LARSON, who also got nominated but is still on the team, has made clear how much work one has to put in a comic book, with the next arc having been reworked multiple times before reaching its final shape.

Issue #6 of Batwoman is approaching and with it the end of JAMES TYNION’s involvement with the title. The issue will also be featuring EDDY BARROWS the as artist, and he has shared his cover for the issue over on his Facebook account. But before that, issue #5 will be giving us the final installment of the current “The Many Arms of Death” storyline, featuring art by Stephanie Hans. Her creative process for the cover can be found on her Tumblr account, together with some of her stunning art.

On a little nostalgic note, GREG RUCKA’s run on Detective Comics with Batwoman as the main character, back in the Pre New 52 era, has gained a trade paperback. It includes not only the “Elegy” story arc, with art by the incomparable JH WILLIAMS III, but the short “Cutter”, illustrated by Jock and never before collected. I can’t recommend it enough, but I will start by saying that it was Elegy that made Batwoman one of my favorite comics in the Batman Universe. Rucka is one of the best writers in DC when it comes to detective stories and Williams is one of the most unique artists out there – no one can do panels as he can -, and he is probably the one person in the world who knows Kate Kane’s character like the palm of his hand. Harley Quinn will be reaching its 25th issue in August, and this milestone will be featuring art by CHAD HARDIN, who has previously worked on her title during the New 52. To mark this one-off homecoming, you can appreciate his western Harley, made while attending Comicpalooza some weeks ago.

What we have this week is not from the ongoing Nightwing series team, but actually from the team working on Nightwing: The New Order. In a new image shared by HIGGINS, we get a better look at the army that will be working under Dick Grayson’s command. It is slightly reminiscent of the robot army used by Batman in Kingdom Come and of the Colony soldiers introduced in the first Detective Comics Rebirth arc, “Rise of the Batmen”. Also, McCARTHY has confirmed a little easter egg left by him: the cosmic key from the 1987 movie Masters of the Universe is what Nightwing is holding in the scene where all the heroes are fallen amidst rubble. In the movie, the key is a device that allows the wielder to open portals to other dimensions. The Dark Trinity will be paying a visit to the circus, and who to call if not the one and only circus boy, Nightwing? The boy in blue will be featured in Red Hood and the Outlaws Annual, illustrated by KIRKHAM, who has already started making a collection of circus references to prepare for the issue. You can also find on his Instagram account a B&W version of the cover and the final, colored version. Have I already mentioned how much I love Nightwing’s Rebirth gloves? It almost makes me not miss the finger stripes. Almost. Rule number one of the honorary members section is to feature Batman related art by artists who are traditionally associated with the Batman related titles, but rules are meant to be broken (besides, I was the one who created this rule, so I’ll give myself a free pass). JORGE JIMÉNEZ, the artist of Super Sons, has also been working on the variants of Superman. This week he posted one of his upcoming covers, and it is so good that our Bat creators went out of their way to praise it. James Tynion has dubbed it “a literally perfect cover”, to what Scott Snyder has agreed. It also got retweeted by Mitch Gerads and so, so many others. Classic Superman in a classy cover. Un trabajo magnífico, señor Jiménez. Talking about Super Sons and variant covers, DUSTIN NGUYEN has shared his variant for issue #5, coming out next month. Continuing on his Batman: The Animated Series recap, this week Nguyen has worked on Tim Drake Robin and Nightwing portraits, besides a rendition of the 8th episode of season 4.