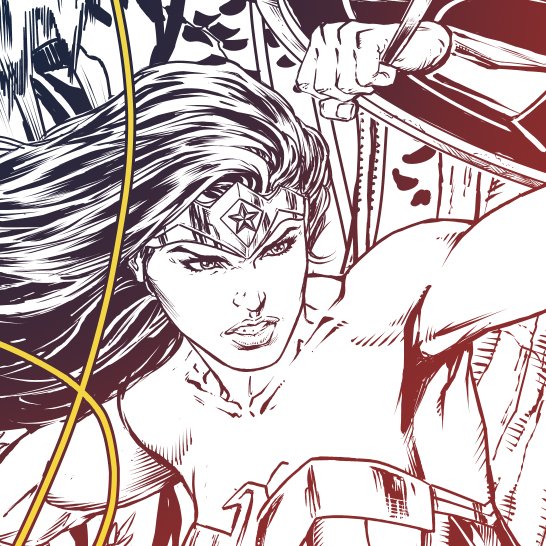 Themyscira afflicted with bat invasion, this week’s news reads. Following the release of the first cinematographic solo Wonder Woman film this past Thursday, the secret location of Paradise Island has leaked to the outside world, leading all types of beings to search for refuge on this isolated land. Most common among the migrants are bats. The flying mammals have been swarming the island, occupying all of the caves in it.

And I do hope all of you nocturnal animals have seen Wonder Woman. If not, I highly recommend it. I went in with very low expectations and came out feeling very hopeful for the future of the DCEU. To celebrate its theatrical release, I am using my authority as writer to declare this Wonder Woman week. Well, of course I am not the only one to do that. Almost all the artists who attend the Batcave have paid the warrior princess of Themyscira homage, making it possible for me to make a special section dedicated all to her. So, before we plunge ourselves into the dark vigilante world, let’s have a little brightness with a Wonder Woman special section.

To officially open this event, have a little piece of gold from Wonder Woman Annual, written by Greg Rucka (who will forever be a honorary member of the ‘cave) with art by Nicola Scott. To open this section, let us have the one and only, the master ALEX ROSS. The art he has chosen to celebrate Wonder Woman feature a Cheetah themed piece, two of her standing in very traditional poses: the superhero looking up and the crouched down figure which is pure Wonder Woman. But my two favorites were the ones that when put together sum up Diana’s character: a very blue, peaceful shot of her with Themyscira on the background and a very red, very violent scene of her fighting in a battlefield. Moving on we have TONY DANIEL’s art, featuring an upcoming Wonder Woman cover and two images of our warrior holding a thunderbolt in battle, one of which unintentionally looks like Gal Gadot. Not only does Tony Daniel’s Diana resembles Gadot, but JASON FABOK’s portrayal of her has a lot of the actress’ features, especially in the action sequences. Other artists who have joined in the Wonder Woman hype were DUSTIN NGUYEN with a cute watercolor portrait; SEBASTIÁN FIUMARA with another portrait, this one a very clear homage to Golden Age Diana; PAUL HARDING, who is more known for sculpting action figures, made himself a DKIII cover; JORGE JIMENEZ shared a piece from his run on the Smallville comics; RAFAEL ALBUQUERQUE with a throwback to Wonder Woman 75th Anniversary special and one of his variants for DKIII; BILL SIENKIEWICZ and his stunning watercolors showing two different takes on Diana of Themyscira; FRANCESCO FRANCAVILLA with a very 90’s version of her; and finally MARCIO TAKARA, who did a version that could go straight to an animation studio and another one featuring the classic invisible jet.

SEAN GORDON MURPHY is a machine gun of social media posts as you’ll know if you’ve been following us weekly. He has always been featured in the All-Star section, but I have a secret to tell you guys: I’m not sure if this project of his is actually from his future run on All Star with Snyder or not, since neither has been officially announced, and well, Sean actually should not even be posting all that much stuff about it anyway.

Not that I’m complaining, mind you, especially because he is always giving some insights on his process and his view on the Batman lore. For example, him making Batman’s cape impossibly long despite his annoyance at it when he was a kid, his scratching technique for doing backgrounds, and the way he prefers to draw Harley Quinn. Also, there are always some small details about the plot that he lets escape, like the fact that Wayne Manor will be in ruins in the story – and a beautiful ruin at that.

But the most relevant question raised by him this week was “Do you think Batman prefers fighting on rooftops or on the ground?” In fact, what makes it special is Mitch Gerads’ answer. Brilliant.

It seems our boys working on Dark Days are getting a bit exhausted. Capullo has been second guessing his decisions in life for a while now, but GLAPION is also feeling like he might loose his eyesight for how much he has been working. CAPULLO is probably the one person who will kill everyone in his team by the end of his work on the title out of sheer fatigue. In fact, I think that he would make himself a villain and kill all of the Justice League if he could. Probably has dreams about it. Guy hates working on team titles and won’t hide it. Despite their fatigue, their work continues to be stellar, or at least it looks like it from what Capullo shares on his social media. This week we’ve had the team assembled, a tiny version of the team assembled, Flash and Supes looking suspicious, Flash from a team-assembly panel, Bats and WW and Flash and some unidentified giant object, Hal Jordan and Cyborg. I’m feeling exhausted just by imagining the amount of work put into those.

Apart from having to draw seven detailed human figures almost every panel, he’s had to decide their height, of course. I personally think that Hal and Bruce should be a little shorter than that, but we’re all entitled to our own headcanons.

FRANCIS MANAPUL, who has been working on the Batgirl variant covers for a while now, shared some of the working process for an upcoming cover showing his unfinished inks and the nearly finished, colored piece. This piece of news is actually not that relevant but is was so funny that I had to bring it to you guys. A person whose nickname on Twitter is “Sex Robot Tim Drake” asked TYNION – and I quote – “Will any members of the Batfam end up being confirmed LGBTQIA+ in canon? Damian gay and Dick bi, for instance?”, to what Tynion answered “Batwoman is like, SO gay.”

I mean, she IS very much gay. Like, spreading gayness everywhere she goes. I see no point in making old characters into LGBTQIA+ just for the sake of diversity and representation, but that’s me, and I don’t hold the truth of the universe. And for those wondering where the the QIA+ came from, it stands for Queer, Intersexual, Asexual and more.

Well, talking about the queer community, have a Poison Ivy + Harley dancing to illustrate that, provided by FRANK CHO, the artist working on the Harley Queen variants. I honestly was not sure where to fit these tweets by TIM SEELEY, but I decided to have them here where his usual working station should be. Firstly, he made a series of tweets on the current state of comic book industry. All four together, they read “It seems to be a common critique recently that comics need to be more ‘consistent…’ creative teams, quality etc… But in my 15 years of experience I’ve always seen ‘consistent’ quality books to lose sales over time until they need a relaunch. I’d even say, based on what I’ve seen, it’s against a creator’s interest to invest in any series long term…which is a real bummer. But, maybe things are changing on that front? I dunno. I hope so.”

If you are interested in this discussion, make sure to read the replies to Seeley’s tweets, there are some insights from readers and creators both, and even some creators working in the European market.

The second piece was a best to worst Batman live action features. I’m not much given to making those kind of lists, but I would say it is a fair rating. And I’m guessing Batman v Superman would be “the other stuff”. Opinions?

I’ll be keeping it short and high class for this week’s honorary members. To open it, a bit of an unusual appearance here in the Batcave. Joshua Williamson, current The Flash writer who also worked on The Button, made a little throwback homage to GEORGE PEREZ with the first page of the “Who is Donna Troy?” storyline from The New Teen Titans. While this is not exactly Batcave material, I couldn’t bring myself not to have it here for the simple fact that this one-shot has one of the best portrayals of Dick Grayson I’ve ever read. Competent detective Dick Grayson, ladies and gentlemen, who has been missing for a while in comics. And also because this page is one of the best pieces of sequential art I’ve ever came across, it made an impression on me from the first time I laid eyes upon it.

As for our other member featured this week, we have ALEX ROSS and some of his unused art and concepts, including Bat Boy and a whole lot of covers: old-school Batman and Robin; the al Ghuls (all three of them) standing with Batman on the floor, probably from Son of Batman; Batman in the sewers of Gotham; a raging Bat; a plunging Bat; and a shadow of the Bat.