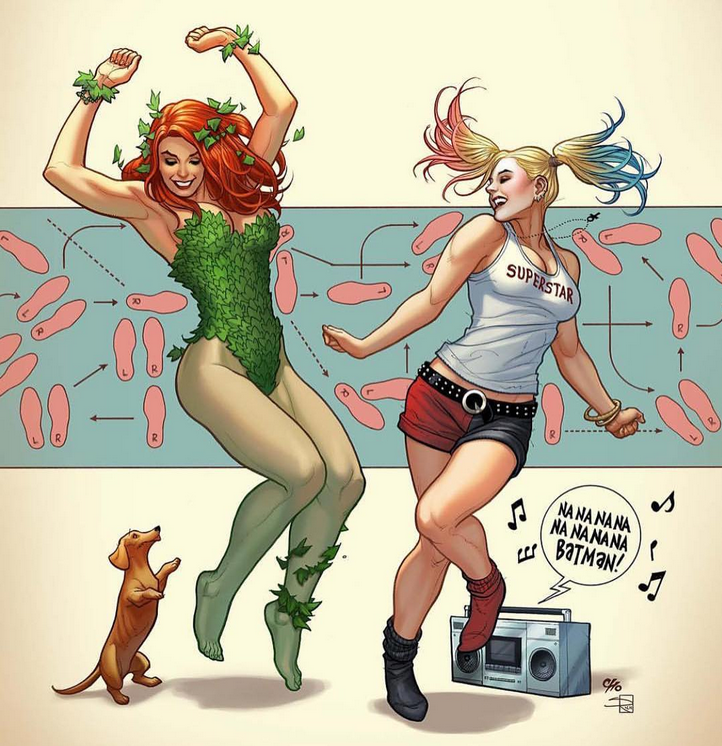 This has been an abnormally calm week, one that would make Bruce suspect of what Gotham is cooking up for him for the week to come. And rightly so, because some new projects are starting to sprout, such as a new Bat-related project coming from CHIP KIDD, a graphic designer who has previously worked on covers for Alex Ross’ books such as Rough Justice, the cover for Dark Knight Returns, and Before Watchmen. As announced by Bleeding Cool, a preview of his new project will be featured in September’s CBLDF Defender, a free comic book released by the Comic Book Legal Defense Fund. Another project that has appeared in media this week was MARC SILVESTRI’s solo project, which apparently will be a Batman/Joker team up. He’s been working on it for quite some time now and has been sharing some peeks of his art. On another note, Warner Bros Animations will be releasing a 10th Anniversary special set with 30 DC Animated titles. The list starts with Superman: Doomsday and ends with Batman & Harley Quinn. On another DC Universe, this time the DCEU, a high-resolution version of the new intro for the movies has been uploaded on YouTube. Besides the characters who have already appeared or are confirmed to appear in the universe such as Nightwing, Catwoman and Batgirl, it allows us to identify some other characters such as Green Lantern Jessica Cruz, Robin, Bumblebee, the Spectre, the Atom, Zatanna, Green Arrow, Hawkman and Hawkgirl, Supergirl, Sinestro, Martian Manhunter, SuperLex, Lobo, and Solomon Grundy. Did I mention ROBIN? I mean, he is flying, which is awkward, and it could mean that is Mr. Miracle, but the person is holding something that resembles a bo staff. Some are very hard to identify, such as the one person between Catwoman and Shazam who might be the Red Hood, I’m not sure, and the flying woman on the left of the Spectre, who looks a bit like Artemis. I could go on forever trying to find out who those people are, but hey, I am trying to actually make some of you guys speak up on this ever silent Batcave, so if there’s anyone I’ve missed, tell us!

SEAN MURPHY is crazy about Harley, and this week he has once again shared is take of her for his solo project.

Very little has come out about this project so far, but SCOTT SNYDER has let slip that Bruce will be dying many times in it. Interesting.

The Joker was revealed to be locked in the Batcave in Dark Days: The Forge. This segment of the story is in the hands of JIM LEE, who has provided us with a sneak peak of what is to come in Dark Days: The Casting, coming out this month. SCOTT SNYDER and GREG CAPULLO were interviewed by ComicsVerse. They talk about Dark Days: Metal and their other projects. Besides, Snyder was mildly drunk for the interview, Capullo having taken him for his first shot of Don Julio Real right before it. ELEONORA CARLINI shared some B&W pages of this week’s Batgirl #12. Next month Inaki Miranda will be the artist and then CHRISTIAN WILDGOOSE will be returning for issue #14, the first part of the Nightwing/Batgirl team up arc, and he’s already started working on the layouts.

An interview with MARGUERITE BENNETT came out on Syfy this week. She talks about Batwoman, Bombshells and queerness. Issue #5 will be coming out this month, the finale to The Many Arms of Death with art by Stephanie Hans. The variant cover will be by MICHAEL CHO and he has shared it on his Twitter account. FRANK CHO shared the finished lineart for the interlocking covers mentioned past week. It is actuallly just a tease, not showing the full art, but it shows Batman standing in the center in a Christ-like pose. He also shared his variant for issue #23, coming out this week.

ALEX ROSS has released a video on his official Youtube channel with commentary on his classic piece of Bruce’s scarred back, “a map of scars”. It is only a minute long and well worth it, even if it is only to see his 1:1 statues of Batman and Superman standing by his side.

MARCIO TAKARA’s every-day-a-drawing sketchbook has been mentioned before here in the Batcave. This week he did a Batwoman sketch.

Trinity #14 will be featuring a cover by TONY S DANIEL and it seems that Batman will be caught in the crossfire between Superman and Wonder Woman. If I were in Batman’s place I would just be running to the hills, but that is why I am not Batman and he is. And to properly close this week’s Batcave we have the one and only DUSTIN NGUYEN, who has been working on the variants for Super Sons. In the next issue Damian will finally be introducing Jon to the Teen Titans, and so Nguyen took the chance to do a classic group composition with the team. His Raven design appealed directly to the child in me who favored her above all of the Titans.