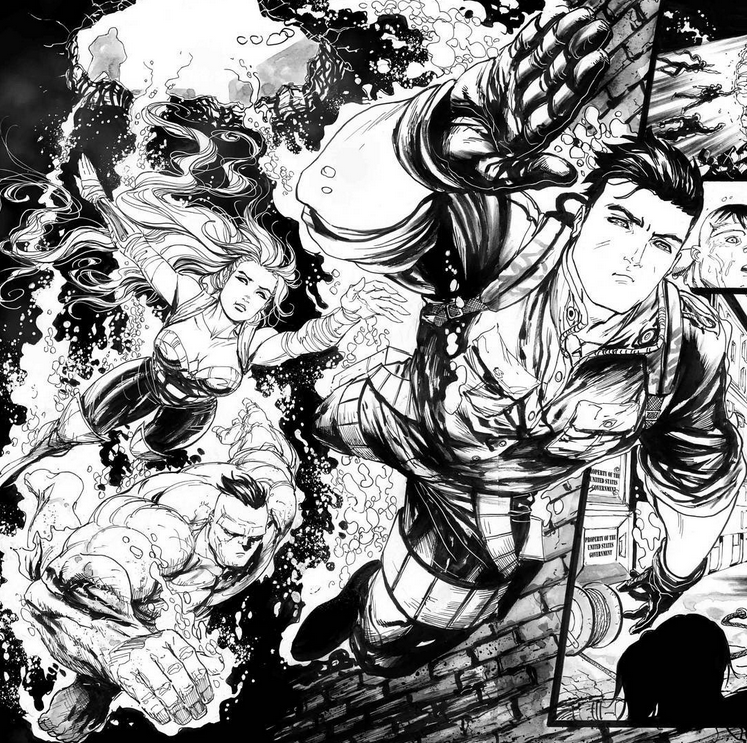 I have to open our regular meeting this week with a little bit of bragging from my part. I must have instincts more heightened than all of them Bats put together because I smelled something fishy last week when everyone went a little radio silent. And now this week we have all of them news falling on our heads on heaps. I feel like I just pulled the wrong piece of a huge newspaper Jenga and am now drowned in news and words and images that I have to put in some shape or order for you guys to read. Not that I’m complaining, I love puzzles.

On top of my pile is San Diego Comic Con, who is turning the bend and will soon be knocking on our doors. The Con will be happening two weeks from now, and showing up in the Warner Bros panel will be Ben Affleck (Batman for those unacquainted with the man), Gal Gadot (Wonder Woman), Jason Momoa (Aquaman), Ezra Miller (Flash) and Ray Fisher (Cyborg). They are not going to be gathered just for fun, as WB will probably be showing new material from November’s Justice League and also from 2018’s Aquaman.

Still on non-comic-book media, Gotham by Gaslight will be getting an animated adaptation. The comic was the first Elseworlds story ever to be released by DC and it still holds as one of the best of the label. Well, in my opinion at least.

And finally, over in the comic book world, the Batman/Elmer Fudd crossover sold out and is now going to a second printing. I myself had no big hopes for it and was pleasantly surprised by how amazing the tale was, even the typically silly, Looney Tunesque backup story. Now let’s move on to other news because we still have a giant pile to cover and Alfred will kill me if he comes down here and finds all of those papers scattered around the cave. Apparently there’s been some controversy regarding Poison Ivy’s portrayal in Batman #26 and TOM KING has come forward to acknowledge it – and to tell people to, please, stop being stupid on arguments. On to calmer waters, King is all praises when it comes to MIKEL JANIN’s artwork. And quite honestly, I am too. Have been ever since Grayson, but he seems to be growing so much on Batman that I can see this guy becoming a huge name in the close future. This time King revealed that the bloody question marks at the murder scene of the doctor from issue #26 were not on the script, it was Janin’s own addition. He’s also shared a page from an upcoming issue showing an encounter between Batman and Catwoman back in the war. I don’t know if I’m more engrossed with his Bruce (who is moving further away from the very Grayson like image from the Rebirth issue) or by his Selina who so reminds me of Audrey Hepburn. Teeny tiny Batmen coming your way as ENRICO MARINI warms up for his upcoming Batman title. Not only is he drawing cute little bats, but also doing some inking warmup – a process that he has also shared on video, showing that YES that was completely done freehand. And as he said in the comments of the picture showing his Batman Sketchbook, the first part is supposed to come out this year, but we still don’t have the precise date.

The baby has a name! The not-so-secret project that Murphy has been teasing since forever was disclosed this week. Titled “Batman: White Knight” (though his original title was Joker: White Knight of Gotham), the 8-issue mini series will tell a tale in which the Joker finds a way to ultimately defeat Batman without having to break the law. Cured of his psychosis, he becomes a politician, using his rhetoric to win the people of Gotham over. Some of the unlettered, B&W pages from the series can be seen on DC’s official announcement. The colors will be done by MATT HOLLINGSWORTH and they seem to have reached an agreement that only 2 colors will be used per page. If it gets as beautiful as Francesco Francavilla’s colors, I’m all in. Free of the embargo, Murphy has been speaking a lot about his creation on social media. He’s confirmed Nightwing (and his backside) in the series, as well as Bane, Two Face, Scarface, Ivy, Roxy Rocket and Killer Croc. No Catwoman. He’s also teased a plot twist involving Harley and commented on his take on Gotham, “a mix of old London and old Chicago“. When questioned about the amount of Bat-paraphernalia the Joker has in his cell, Murphy said that this will be addressed in the series.

White Knight comes together with Nightwing: New Order as DC’s hesitant revival of Elseworlds stories, even if they are not being released under the Elseworlds label. If those titles do well, DC might open more space for stories such as them. And even if it is not Elseworlds proper, Murphy says he took a lot of leeway with Gotham for White Knight, making it surely an alternate take on the universe. And to finish, he’s also shared a panel showing Renee Montoya “behind the wheel and about to kick ass” and a masterclass in lighting presented in the shape of Bruce holding the cowl in tradition Hamlet pose. To be or not to be Batman, that is the question. Here comes a downpour of news falling on your head like the eternal nocturnal rains of Gotham City. First things first, Dark Days: The Casting is coming out this week and SCOTT SNYDER shared two panels from it as a tease, one showing Batman as he enters the cave and finds it… out of his standards, the other teasing Hawkman and Hawkgirl.

Before we move on to news on Dark Nights, Snyder has put together a concise chart to guide us through the molten metal rivers of this summer event. There are going to be two separate crossover events, Gotham Resistance and Justice League vs Dark Knights. Another new detail is the Metal: Lost Knight issue for November. More details about this are going to be coming out during SDCC. Now going into Dark Nights: Metal, Snyder has reported that issue #1 is already close to selling out and we are still one month away from its release. It comes as no surprise that the reunion of Snyder and Capullo would be a market success, but wow. The success of Dark Days and Metal #1 has prompted DC to decrease the price for the following issues (#2 to #6), meaning the whole series will cost 5 dollars less, as reported by CBR.

This week also gave us the first looks into issue #1 of Metal. Along with some variant covers, Andy Kubert’s showing Batman riding a T-Rex and Jim Lee’s depicting Wonder Woman in her gladiator clothes, some unlettered pages were released. They show the Justice League in a fighting pit being watched by Mongul and a child, glimpses of the Blackhawks, Red Tornado, and a map of the Multiverse.

And back to our usual task of covering the creative teams, GREG CAPULLO is back behind his pencils, working on issue #2 of Metal. He has resumed sharing some of his works in progress, including a shot of Aquaman very much comfortable in his element, Cyborg and Wonder Woman, and the Dark Knight himself riding a motorcycle. We will also get to see some more characters in issue #2 as we got to see a piece with Damian Wayne and another with Zatanna and Constantine. And as the rain subsides and the sun starts to make his presence known on the horizon, I have one last piece of information: TYLER KIRKHAM’s variant cover for Metal will be sold also in B&W for people to color it as they see fit. You know, that one with Batman, Wonder Woman and a freaking Dragon. Hold on to your seats ’cause KGBeast is coming, as TYLER KIRKHAM teases his appearance in the upcoming Annual issue. The artist has also shared his take on Jason in full gear, guns firing and a stunning panel showing the Ragtag Trinity underwater. No matter how much they try, DC will never convince me to call a team with this fluffy version of Bizarro in it the “Dark Trinity”.

Another piece of news for this week is that DUSTIN NGUYEN has started working on the third volume of Secret Hero Society. If you are not familiar with it, the title, released by Scholastic, depicts Bruce, Clark and Diana as kids in school age. The trio forms a secret detective team to find out some mysteries involving Ducard Academy, the school they attend. Working with Nguyen is DEREK FRIDOLFS, the same team that behind Lil’ Gotham. From his sketches, we can see that the Lil’ League is reunited. SDCC is only two weeks away and ALEX ROSS is one of their big names, he even got a promoting wall panel all for himself with art from Kingdom Come. The illustrator is disclosing some of the exclusive material for the event, such as a 2017 Sketchbook displaying the Trinity and their arch-nemesis on the cover, and Batman and Captain America lithographs. Who’ll also be attending SDCC is LEE BERMEJO. As a call to arms, he has shared a jaw-dropping piece of the Justice League, heavily inspired by the DC Extended Universe. I always stop to admire Bermejo’s attention to detail and his little nods at realism, like showing the seams on Batman’s uniform, but I couldn’t help but also notice his hashtags, and I quote “Yes, even Green Lantern. We all know he sucks. Come on, his weakness is yellow” and “It ain’t the size of the Batarangs that counts” and “Superman loves crunches.” Gold.