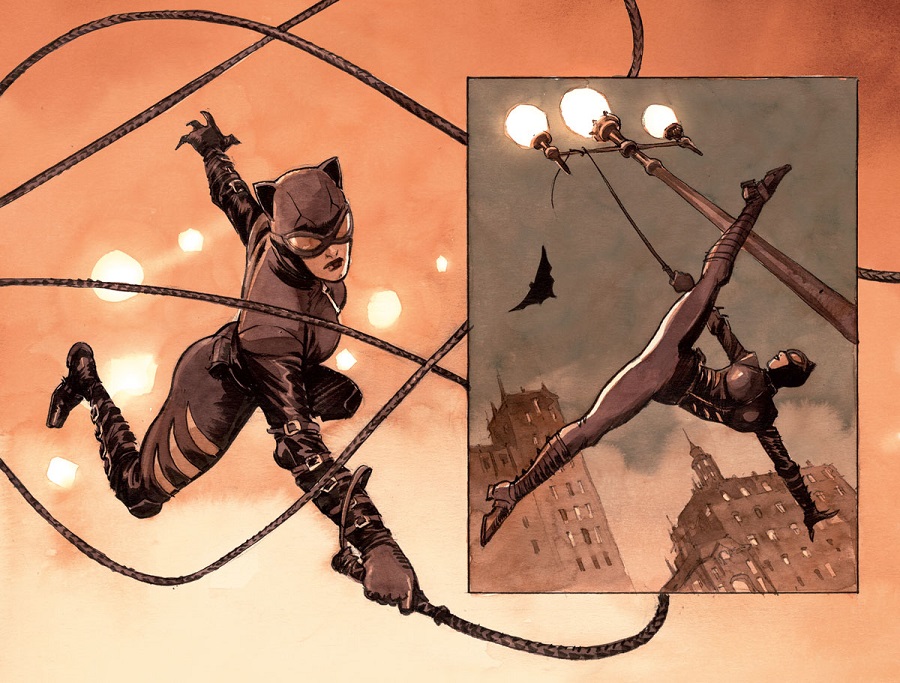 Gather ’round, my dear darkness dwellers, for we are about to start our annual pumpkin carving session. This year the theme will be Alfred’s mustache. The best pumpkin artist will be receiving a pie made by the greatest Brit cook there ever was, Pennyworth himself.

What, is it not Halloween yet? Well, with DC releasing so many news for eery comics coming out in October I thought we were near it. An 80-page anthology written by horror novelists Brian Keene, Weston Ochse, Edward Lee, Mary SanGiovanni, Wrath James White, Nick Cutter, Ronald Malfi, and Bryan Smith will be re-imagining DC’s mythology with a little supernatural quirkiness. DC HOUSE OF HORRORS will be coming out October 25, just in time for Halloween. As for Gotham residents, RAGMAN will be getting a new miniseries. The character appeared in Arrow, the CW series, and is now returning to comics under the pen of RAY FAWKES, with art by INAKI MIRANDA and colors by EVA DE LA CRUZ. Coming out on October 11, the story will be following Rory Regan as he deals with survivors guilt while trying to understand the uses of the Suit of Souls.

After walking through this haunting section of the cave, please take a seat, make sure that your pet bats are leashed, and let us watch as our regulars tell us what they have been up to this week.

Very little has come out from our main team, but it was a very significant little. Tom King shared a panel by CLAY MANN from his upcoming issue dealing with the origin story of Kite Man. I blame him for automatically thinking “hell yeah” whenever I read “Kite Man”. Early solicitations for Detective Comics #966 and #967 came out this week and they continue the story of “A Lonely Place of Living” and Tim Drake’s return. Very little can be apprehended from the solicitations themselves, but the cover for issue #966 show a beaten Tim facing off a person who seems to be Batman, but could well be Azbats.

Yes, Azbats. Or Batazrael, as the team is calling it, who will be making a comeback in the pages of issue #962. The cover for the issue has been disclosed and also RAFAEL ALBUQUERQUE’s variant, both showing the new Azbats. The design was made by ALVARO MARTINEZ, and he has shared his sketch for it. But before we got the reveal of the actual cover, CHRIS CONROY, Detective Comics editor, had teased it on the beginning of the week. This spawned a hilarious conversation between him and JAMES TYNION on the possibility of a Swimsuit Special holiday cover. According to them, Luke would be the sexy boy, Kate the fashion lady, Cass would be wearing a modest one-piece, Azrael would be pulling the surfer look with long shorts, Steph with a regular purple two piece and, best of all, Tim would be the typical white boy wearing trunks and covered with sunscreen, while Bruce would be wearing an european speedo. Because fanfiction, the official writers also do it. Since the official announcement last week, SEAN has been talking a lot about his solo project. If you plan on going into it without knowing anything about it, I would recommend you skip to the next topic. While there is no big spoiler, some information might spoil some minor plot points.

First of all, he’s said that he’s pushing Gotham too far for it to be regular continuity, but that he hopes some aspects of his project will be adopted into it in the future. The detachment goes as far as having some characters killed off.

His Batman will be “out of control”, walking on the gray edges of morality. As for appearances, only Gotham citizens will be showing up, so no greater DC associates. Mr. Freeze, his favorite villain, is confirmed. No Ra’s al Ghul though, he was “a can of worms that wouldn’t [work] for the story.”

About the Robins, 3 of them will be featured in the story. Jason is confirmed not to appear, while Dick will surely be present, as he’s been continuously asked about the appearance of Nightwing’s backside. I would dare say this means Tim and Damian will be the other two, but we still have Stephanie and Carrie Kelley as possibilities, or even a Robin of Murphy’s own creation. Other associates of the Bat confirmed are Bullock, Montoya, Alfred and Gordon.

As for his take on the Joker, he’s said to have modeled his personality on Don Draper, a character from the AMC series Mad Men, and his relationship with Harley on Bonnie and Clyde. As he said before, the title of the series was supposed to be Joker: The White Knight, so this will be a Joker-driven story. Despite the change in the title, he’s said that DC placed no limitations on his work, not even nudity, which probably means this will be an M rated title. The official title for MARINI’s project has been announced, together with a short summary. Batman: The Dark Prince Charming will be telling a tale revolving around a girl that ties the Joker and Batman together. The title will be released as a two-volume graphic novel, the first one coming out on November 1. Despite the questionable title (Prince Charming, really?), the art looks spot on. Apart from the finished bits shown on the official DC statement, Marini has shared a storyboard page on his Facebook account. The Casting came out this week and it is… what can I say. Crazy. CAPULLO continues his work for the following issues and, among all of the crazy stuff, we will finally get to see Damian driving. For all of the constant talk that “I know how to drive since I was five” it is a wonder we finally get to see the lil’ brat behind the wheel. Also, Bat-cycle.

A slightly obvious but needed confirmation has been made by TIM SEELEY: the Dr. Hurt story arc was indeed related to Metal.

Marking one year since the relaunch, issue #12 of RHATO has been getting stellar reviews, with an average of 9.1 on Comic Book Roundup. It is currently tied with a few other titles as 4th best rated current issue. This, together with the very appealing cover and the death of a major character has made sales skyrocket and the issue is currently sold out on Diamond Comics Distributors, as reported by Bleeding Cool. If you haven’t gotten yours yet, I would say go running to your comics shop and get one, because it doesn’t seem like DC will be doing a second printing.

As precious stones, we have few but amazing art to illustrate this week’s honorary section. As reported last week, DUSTIN NGUYEN has started working on Secret Hero Society volume 3, and he continues to share some of his drawings for the title. Another upcoming event that has been continuously covered by us is Oliver Queen coming to Gotham in the pages of Green Arrow. This week we finally got to peek into some pages by JUAN FERREYRA and he managed to exceed my expectations, which were high to begin with. I adore the curly swirly cape on the first page, it takes me straight to a Tim Burton world which I will never complain to be taken into. The blood spilled on the murder scene reflecting the night sky and slowly closing in on Batman is also an example of Juan’s incredible graphic storytelling. The second page makes a parallel with the blood and the wine, and this just sums up so nicely the differences and parallels between DC’s two major rich boys. I would bet my month’s salary on that obscured figure on the background being Bruce. Also, YANICK PAQUETTE disclosed one of his variants for Justice League, a beautiful poster art, heavily graphic and using only two colors. Just exactly my cup of tea. And to close off with a slightly unusual piece of art, PAUL HARDING, who sculpts many of DC’s collectibles, revealed one of his current projects: a Batman bookend, complete with Harley, Joker and a big bomb.