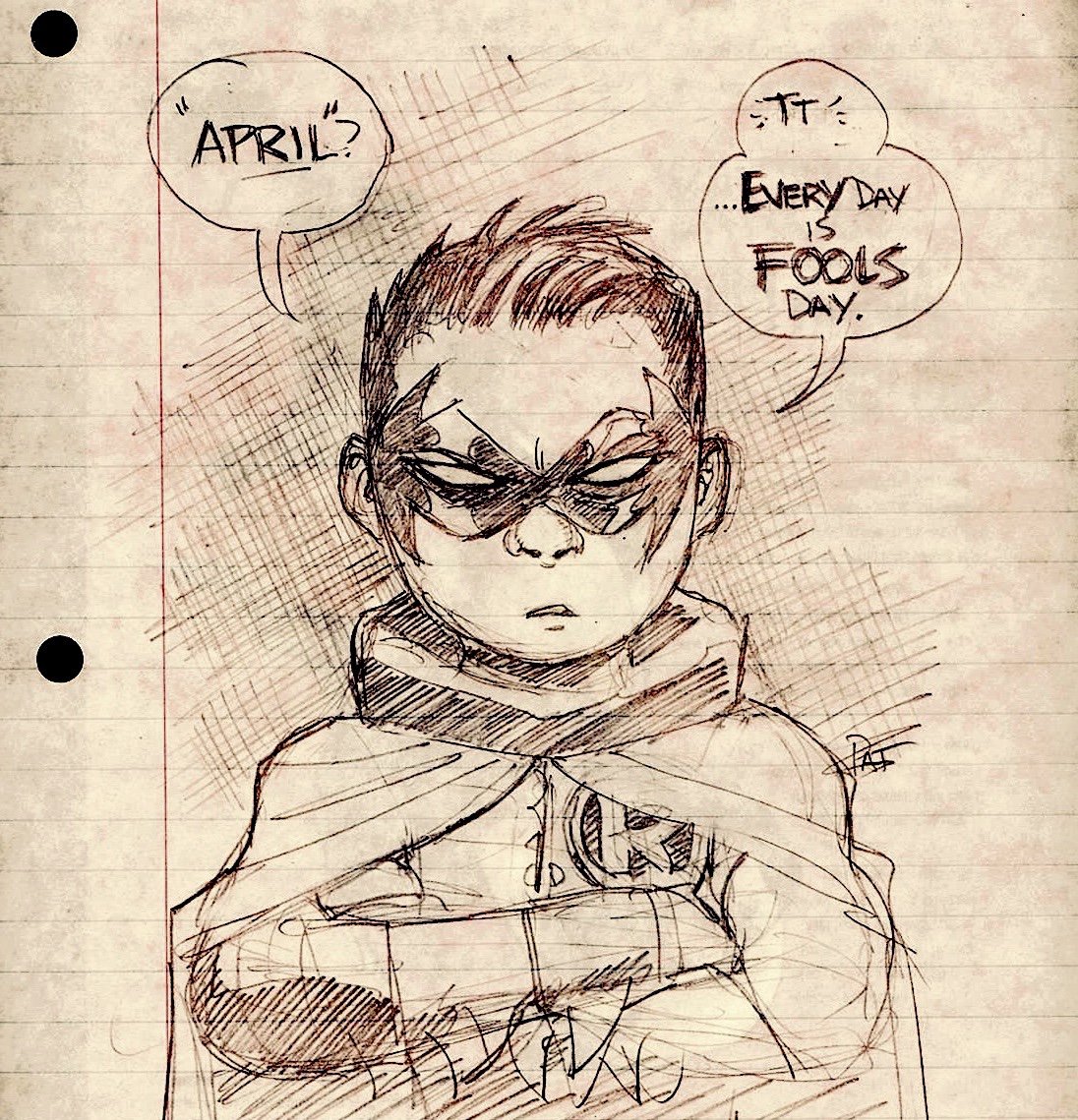 Welcome back to this dark and damp place us bats call home. This has been a crazy week with the release of the Justice League first official trailer, Joss Whedon being announced as writer and director for an upcoming Batgirl feature and two cons happening at the same time (actually three if you count the one in Barcelona): WonderCon and Fan Expo Dallas. During the latter we had the big announcement made by our Giant Flying Foxes, also known as the biggest bats there are, Snyder and Capullo. Their reunion project, Dark Nights, will be starting in August, and it will be a big event involving all of DC with Batman as the pivot point. Fan Expo was also responsible for Tom King going broke for buying too many toys. For the kids, of course. Talking about kids, have some Damian calling us all fools for April Fools day, also known as the unofficial Joker’s Day, by the forever official Damian artist (at least in my heart), Patrick Gleason. Now with the creative team and title of the previously secret project announced, we can better understand Scott Snyder’s tweet to Capullo with a very heavy metal Batman shirt of our news coverage fellows Metal Injection. Or it just might be because, you know, Capullo is a metalhead. Or both. I’ll leave it on your hands. Before we start, there is a really important piece of news that TOM KING would like to share with the world. Kite Man’s name is Charlie Brown. Now back to our regular programming.

If you have seen the Spider Man: Homecoming trailer you might have noticed a very familiar scene involving airplane surfing. If your bells have not rung, King’s have – and mine as well. Also on the action side, ever thought of Jack Bauer and Batman working on a mission together? Well, the suggestion has been made to King, who apparently thinks Batman would make things much more time efficient than Bauer ever did.

When you think about Batman and Commissioner Gordon meeting, what image comes to your mind? Apparently in GERADS world, Teen Titans GO! has given him the standard picture. With his Swamp Thing issue getting closer and closer, more panels are being brought to life, including this one to the left showing Gordon almost having a heart attack when meeting Swamp Thing. You would think that with Clayface running around he would be used to it, but I guess not. The new posters for the Justice League film had TYNION really excited about the gray bat on black suit look for Batman.

After a couple months working on Suicide Squad, BARROWS is gladly returning to Detective Comics. Also, he has been showing some of the art he will be selling at CCXP Tour Nordeste, to happen in two weeks in Recife, Brazil (a lot of AR currently working on Bat-titles will be there and the person writing this article would kill to be able to attend it).

Another Brazilian extraordinaire, TAKARA has been keeping a one drawing a day notebook, and this week he has drawn a Robin (I would dare say it is Jason, but that’s just me), Harley, and Batman, besides having shared some of his art for upcoming issues. Both FRANCAVILLA and JOCK have finished their duties for All-Star and will be leaving the cave for the time being, and to say goodbye they have both shared their covers for the upcoming issue. SNYDER has properly said his farewell to Jock by sharing a beautiful page from issue #9 that recaps some of the things that happened in previous issues, and it might all be connected to seasons. He is also welcoming Alburquerque with a terrible joke involving Batman and baseball.

We say goodbye to them and welcome the newly announced team for the next backup story: RAFAEL ALBUQUERQUE and RAFAEL SCAVONE writing and SEBASTIAN FIUMARA on art.

Meanwhile, MURPHY continues to share his panels, and they continue to look amazing. He has admittedly inspired his Gordon on his John Constantine, and it shows. Also, his Gotham Harbor depiction got an A+++ from Jock, and that, ladies and gentlemen, is high flattery.

HOPE LARSON had her own panel at Wondercon but was a bit worried about the influx of unanswerable questions about the Batgirl movie that she might be getting, which doesn’t mean that she is not super excited about it.

On the artistic side, MANAPUL showed us the backstage process for his Batgirl #10 variant cover, coming out 04/26. JOHN TIMMS has shared a Poison Ivy/Harley Quinn fantastic board. Mister TONY S. DANIEL has been putting some of his originals for sale, including some Batman RIP pages showing Bruce underwater and his greatly disturbing take on the Joker. I still cringe every time I see it.

Talking about the Clown, JIM LEE has drawn a The Killing Joke inspired Joker on one of those draw it yourself covers for Harley Quinn and the Suicide Squad April Fools’ Special. Appropriate choice of character, I would say.

DUSTIN NGUYEN draws some of my favorite versions of all the Bat characters, and it is no different when he chooses to do a shadowy version of Batman Beyond or to revisit good ol’ Mr. Freeze.