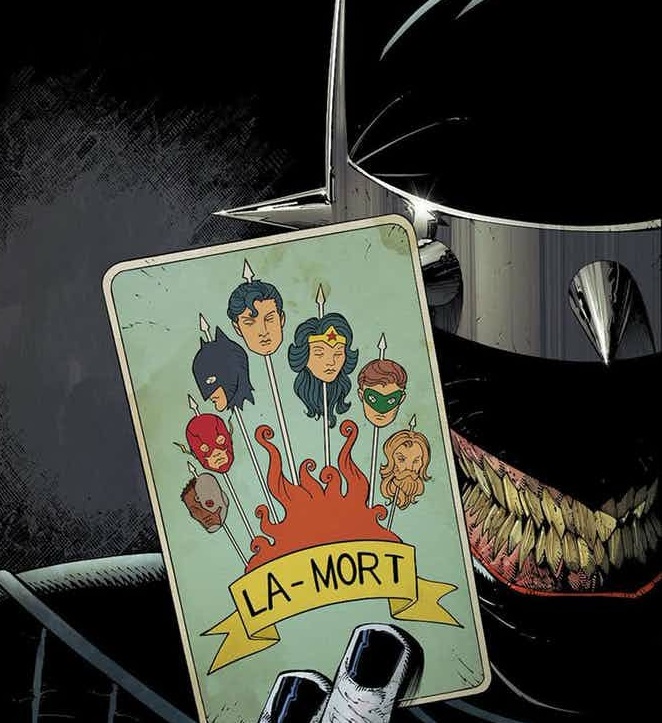 Winter is coming and with it more and more Bat-Books are finding their way out of the depths of DC’s shelves. This week we are welcoming a new title with Batman: Creature of the Night. Also, further details were revealed about White Knight and the Metal tie-ins. So start airing your coats, stock up with canned food, and get ready for a cold season filled with bats in your house. I believe their food of choice would be bananas.

We are starting the countdown to Tim Drake’s return to the fold. The cover to issue #967 got disclosed this past week, and EDDY BARROWS took the cue and shared the uncolored art. The design is openly based on Batman #442, the last issue of A Lonely Place of Dying, in which Tim is first shown as Robin. And coming after A Lonely Place of Living will be The Fall of the Batmen, starting in issue #969, as teased in the end of Batwoman #6, Tynion’s last issue on the title.

And if you’ve ever wondered what would be the chain of command of the Bat-family, JAMES TYNION gave his piece of mind on the matter last week. In the Belfry, he says, Batman is the leader with Batwoman as field commander. As for the family, it is tougher to get a precise chain in his opinion, mainly due to the fact that they are all ex-partners. In moments of crises, Nightwing would probably take command, him being a natural leader, but his authority would be open to questioning based on the “What Would Batman Do” principle.

I myself tend to agree with that, but I see Tim and Damian naturally following Nightwing while Jason and Babs would be more reluctant. In fact, to use a Justice League comparison, I see Dick as Superman, Babs as Batman and Jason as Wonder Woman of the family. If you agree to disagree, come to us with a comment on how you see the power dynamics of the family. Different takes are always welcome!

One more new project, one more new table for us to fit down here in the Batcave. Let us welcome those two! They are not exactly newcomers, KURT BUSIEK having written Trinity before and JOHN PAUL LEON having illustrated Mother Panic, but now they are officially part of the ‘cave dwellers. Announced last week, Creature of the Night will be telling the tale of a young Batman fan, living in a world where superheroes are just fiction. One fateful night, Bruce Wainwright’s parents get killed in a similar fashion as Bruce Wayne’s. The title is due to come out in November, but Leon has been working on it for a while now and is currently inking issue 3 of the 4 issues planned. Busiek, on his end, has declared that the title will be a showcase for Leon’s art. The cover for the first issue has been revealed together with an early solicitation. From what I could understand of it, the book sounds like something to be stored in the same category as Batman: War on Crime by Alex Ross and Whatever Happened to the Caped Crusader by Neil Gaiman as interpretations on the meaning and symbology of the Bat.

One of the most awaited elements of White Knight if finally out for the world to see: SEAN GORDON MURPHY’s Batmobile design. The artist is a car aficionado, so his take on the most famous vehicle of comic media was much anticipated. The reveal came together with an interview given by the artist to Nerdist in which not only can we see his design sheets, but also several pages showing the Batmobile from different angles. To add to that, Murphy has shared a colored version of his design. He says that he wanted the car to have a similar profile to Keaton’s 1989 version, but with some elements of the Tumblr mixed with it plus some sports car pieces. Oh, and the exhaust was borrowed from Spitfires. You know, that aircraft that does actually spit fire, used in WWII by the British Royal Air Force. Not only that but in some of the pages that got revealed we can finally get a glimpse of his Batgirl (piloting Roxy’s Rocket) and Nightwing. And hey, we are not done with the big news yet. DC has allowed Murphy to dub his Joker JACK NAPIER. Yes, Burton’s Joker. This will be his first appearance as such in comics. The Joker came visiting to thank everyone who remembered ENRICO MARINI’s birthday last week. He even added a very special candle to the cake. Marini also continued his trend of sharing videos of him sketching, this one a quick and rough sketch made with a soft lead pencil. Any of you who is an amateur artist will know how hard it is to achieve likeness with no base sketch and with such broad, rough strokes as Marini displays on this video. I was absolutely baffled by it.

While we were all reading the first issue of Dark Nights: Metal, Mr. CAPULLO was working on the upcoming issues and sharing some more art, most of them of Superman: angry Superman, flying Superman, and 1-inch Superman accompanied by 1-inch Wonder Woman. On further news, some details of the upcoming Metal tie-ins are slowly coming out, and JIM LEE has shared his pencils for a variant cover of Hawkman: Found #1, featuring a deep-in-trouble Bat.

As we get nearer to the Dark Multiverse spawning those Bats out of Hell (which is also the title of the Justice League tie-ins) some of the books are getting more and more details revealed. This week also brought us previews of Batman: The Murder Machine, Batman: The Red Death, Batman: The Dawnbreaker and Teen Titans #12, the first issue of the Gotham Resistance.

First off, BATMAN: THE MURDER MACHINE, by Frank Tieri and Riccardo Federici. The preview shows Cyborg facing the evil Bat version of himself. The artist has also been sharing some WIPs on his Facebook account, including him inking machine-Batman’s backside (and Federici apparently uses ballpoint pens to ink his drawings), a Bane shot, an unfinished Killer Croc, and another unfinished Two-Face plus Clayface piece. THE RED DEATH by Joshua Williamson and Carmine di Giandomenico seems to bring us a Batman that will be a destroyer of worlds, an assumption further proven by the colored version of the spheres panel shared by Williamson last week. As for THE DAWNBREAKER, by Sam Humphries and Ethan van Sciver, young Bruce will be getting a Green Lantern ring right as his parents get killed. His constructs seem to be coming out of his fears from what can be seen on the cover. JASON FABOK, who is responsible for all of the Batmen covers, shared the cover art before the logo got placed. In TEEN TITANS #12, by Benjamin Percy and Jonboy Meyers, the Gotham Resistance team will be entering an Escher-like maze in order to rescue Nightwing. Last but not least, the cover of THE BATMAN WHO LAUGHS, by Greg Capullo. As Snyder has put it, this will be the leader of the Dark Knights.