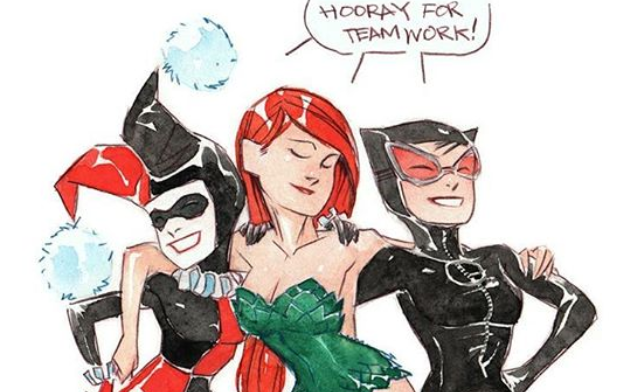 So there I was, stepping into the Batcave to do this wrap up of last week, and what do I find? The remains of a large gathering, batarangs scattered across the floor, teacups and coffee mugs left all over the tables. I’ll be charging overtime for this, just you wait and see.

I’m told the reason for this gathering was the extra dark time during the day due to the eclipse and all of that, so the bats threw a party. I even found some art around here, people like Patrick Gleason and Sean Gordon Murphy made sure to bring their contributions to the event. Gleason brought his cover of Batman & Robin #13 and Murphy some pages of ECLIPSO, a story from Batman Annual #16, written by Alan Grant with art by Vince Giarrano.

The alignment of sun and moon also made the tabloids go crazy and an enormous amount of rumors involving the DC Extended Universe started to come out. I was honestly ready for some news telling us that Batman has been bought by Marvel and would now appear in the next Avengers movie. But worry not, we have untangled this whole mess for you here at The Batman Universe.

We also got a visit from GEOFF JOHNS and GARY FRANK with the reveal of the covers for Doomsday Clock, including the uncolored version of it. One of them makes reference to Roscharch and his “the end is near” sign while the other one doesn’t shy away from its message: Dr. Manhattan has come for us all. As far as I can remember, this is the first time we are seeing his face on Rebirth, the other appearances being just of his hands. As if all of that were not enough, we also celebrated an anniversary here in the ‘cave: August 25th of 1940 was Dick Grayson’s first appearance as Robin. Happy 77th birthday, Boy Wonder! Coming next in the life of Kite-Man, he who is the biggest threat to the safety of Gotham will be taken into custody for questioning. In this page by CLAY MANN and JORDIE BELLAIRE, the villain gets remorseful while sitting in an interrogation room.

Two details about the covers for White Knight have come out this week. Firstly, issue #1 will have 3 covers: the main one, a variant cover, and an exclusive Sean Gordon Murphy cover to be released on his website. The other was a little peak that Murphy gave us of the cover of issue #3, showing Nightwing and Batgirl swinging through the air. The colored version of the same piece has also been teased. I have to say that I love this version of Batgirl’s cowl, with the little ears coming out of her hair. Deadly cute. Murphy also shared a final colored version of his Batmobile with flames coming out of the Spitfire exhaust he chose for it. Last week we got a glimpse of Marini’s take on Commissioner Gordon and Alfred, and also an original character that got discarded along the way. In the comments, Marini got asked whether it was him or DC that discarded the concept and he answered that it was his as was given carte blanche by the publishers. Detective Chimp is coming to the pages of Metal! CAPULLO went on a sharing streak this Sunday and expressed his happiness with being able to draw the greatest detective in DC Comics – sorry Batman, but Chimp will take you anytime. He will be showing up in a bar scene as the Justice League takes a moment to just chill.

The Batman Who Laughs and his evil Robins have been revealed last week and a downpour of comments has come from the creative team working on the character. JAMES TYNION has dubbed it “one the scariest, most evil characters I’ve ever worked on”, CAPULLO shared some snippets he did for Metal, one of the Batman himself and other of the evil Robins. The cover of the one-shot by JASON FABOK has also been revealed as well as RICCARDO FEDERICI’s take on the character. Another piece by FABOK that came out last week was the cover for The Drowned, the Atlantean member of the Dark Knights. Nightwing: The New Order hit shelves this past week and responses were divided. I won’t go into the whole mess that it spurted in the Dick Grayson fandom, but an interesting trend can be observed over at Comic Book Roundup: while the issue got good reviews from general websites, the lowest ratings came from us and Batman News, the only two Batman specific websites in the list, showing that Batman fans are still hesitant about it. HIGGINS himself has acknowledged the fact that he’s dealing with a controversial theme: he’s go-to thank you note for positive reviews and comments has been “Thanks for giving us a shot.” About the following issues, HIGGINS has confirmed the appearance of the other Robins and commented on a “powerless Superman” showing up. He’s also shared a couple pages from issue #2, illustrated by TREVOR McCARTHY and colored by DEAN WHITE. It seems Dick is taking Jake somewhere in a haste. Our most prolific member of the week was one Mr. DUSTIN NGUYEN. He’s revealed his variant cover for Super Sons #8, coming straight out of Michael Jackson’s Billie Jean. A new Secret Hero Society page also came to light, featuring Harley and the Trinity. He’s also shared some commissions he did for Warner Brothers’ gallery a few years ago. A piece showing Batman standing on a heap of villains with the company of Robin-Tim Drake, and a collection of 7 drawings that include a Batman v Superman shot and two Batman AND Superman pieces, two of the Justice League, one stand-alone Batman, and my favorite, a tied-up Batman with the Gotham Sirens celebrating their team work on top of him. I love how expressive his tiny beady eyes are on this piece. One of our visitors that keeps coming back (and will always be welcome in the Batcave) is JUAN FERREYRA. This time he comes to us with a Flashpoint Batman + Joker watercolor that makes him squeeze a little further into my favorite artists currently working for DC list. He’s also shared his take on the Batman who Laughs as he works on the Green Arrow tie-in issue. I’ll take the cue and just command you all to go pick up Green Arrow #29, an amazing piece on the dynamics between Oliver and Bruce. And Juan is one of those artists who knows how to work with Batman’s cape, I kept staring at it like it was the main character. Holding the key that locks the Batcave this week is JIM LEE, no introductions needed. I won’t even start describing this one or else this article would never end. Just take a second and admire the amount of detail put into the Joker and the Riddler. Absolutely stunning work.