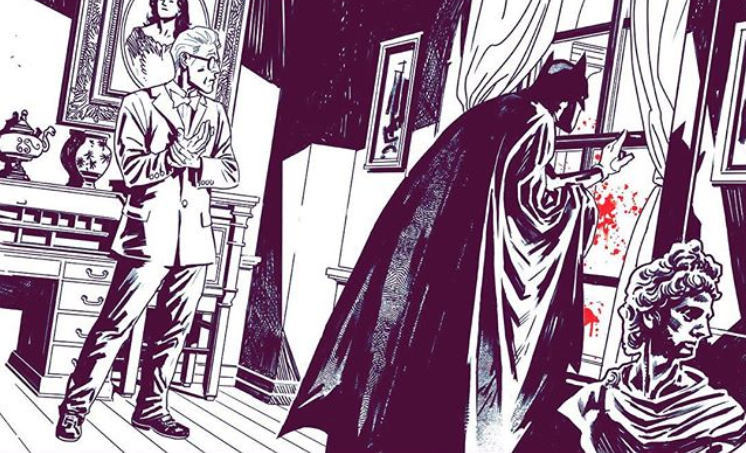 Sorry, folks, the cave is closed. No, I have no idea why. They only told me some big shots are in a meeting and don’t want no one bothering. Yeah, yeah, I saw some of them going downstairs. I could recognize JIM LEE, he was holding some kind of book cover, it had the boss’ face stamped on it. That TONY DANIEL guy also passed by me while I was sweeping the front porch, with a picture of boss holding a spear. I know, right? Mr. Wayne can be quite eccentric. Champagne guy there told me – you can hold a secret, right? This cannot leave the Manor. So, the guy told me that JORGE JIMENEZ brought an old picture of Mr. Grayson dressed up in Mr. Wayne’s clothes. Said it was from an Earth 2 or something like that.

Is that Dr. Quinzel coming in? Who is that with her, is that RAFAEL ALBUQUERQUE? No, it cannot be, guy lives on the other side of the universe. I’ll go say hi, she treats a friend of the cousin of my aunt! Hey, miss Quin- Well, I guess she didn’t recognize me. Must be too popular now for old friends. That one guy I know, that is ENRICO MARINI. Enrico! Hey! You’re here for the meeting? What do you mean “Batman’s birthday”? I have no idea who-

Wait a minute. Is Alfred Batman?! Hope all of you enjoyed Batman Day and went on some crazy Gotham adventures, even if they were only in your heads.

King took a moment to answer Bat-related questions during Batman Day. Most of them were not very relevant to the future of the title, some of them got cryptic answers from King, and some led to fun answers such as Alfred being Bruce’s favorite pizza chain. A point that is worth noting was King revealing that the upcoming arc, “Dream of Me”, will be part of an overarching story that will extend until issue #50, despite it being only three issues long. King also said that he might be interested in writing a story about Bruce Wayne in training. While this does not mean that he will write it, it sure makes me hope he would.

A couple weeks ago we got to see an uncolored page by Joelle Jones from issue #33 that shows the boys gathered in the Manor, Jason trying to take back his jacket. Jason lost. “In a few days, in a prison outside of space and time, Tim Drake hears a very unexpected voice”, says Tynion. Timbo is returning to us this week. Enough said.

After a whole lot of confusion and controversy, Sean Murphy has decided to step away from Twitter for a while. Fortunately, he’s just moved to Instagram, so we will continue getting updates from his work on White Knight. A variety of updates have come our way, from a photo of himself he used as reference to draw Batman, to a sequence where Harley tells Joker her point of view on their relationship, a page of Batman grappling across Gotham’s skyline (and wow that city background is stunning), Joker studying in the Arkham library to build his appeal (yet another stunning background) and, lastly, the cover art for issue #4. With all of the Metal craziness, Doomsday Clock is a little under the radar at this moment. Precisely two months prior to the release of the first issue, on September 22, DC Comics released a video of Geoff John talking about what led him to write the story. Gary Frank also shared his lineart for one of the covers, a discarded costume of a secret character lying on the ground. The clock is ticking. Mr. Oz’s identity has already been revealed in the pages of Action Comics #987, and he is not who anyone expected him to be.

The first one-shot to release, Batman: The Red Death has sold out and is getting a second printing. The issue was wild, and Joshua Williamson says that the ones to come are even crazier. Last week we got teases for most of them, including a little piece of news: Yanick Paquette will be joining Scott Snyder, Olivier Coipel and Bengal on the team of Batman: Lost. He will be working on ten pages of it, and he shared a panel of Batman investigating blood spatters on a window pane. Francis Manapul, who is working on The Merciless, shared progress shots – rough, lines, and rendered art – of a face, probably Bruce’s face, and Scott Snyder shared a double spread by Philip Tan from The Drowned. For this which was both Harley’s and Batman’s day, John Timms shared progress shots of a watercolor commission he worked on during Boston Comicon and an uncolored page from one of the upcoming issues.

After a particularly long section on the previous week, this week we have a different kind of news for Nightwing. Kyle Higgins, writer of New Order, made a Twitter thread talking about his creative process with Trevor McCarthy. It is very insightful for those interested in the making of comic books.

Since we’re in a “Tim Drake is coming back” mood nothing better than some MARCUS TO to celebrate. Besides two quick commissions, one of Nightwing and one of Red Robin, he also shared a piece he colored himself of Timmy being fabulous as he is. Our other guest is Mr. Hard to Pronounce STJEPAN ŠEJIĆ. He does these compilations of past art he calls “randoms” and among all of the greatness we can find Batman carrying an unconscious Dr. Harleen Quinzel, a reckless Robin (I honestly can’t tell if that is Dick or Tim) being bandaged by an angry Bruce, plus a Harley & Ivy little piece, a redhead dominance with an Ivy portrait and a full body Batwoman, and finally a Harley focused post featuring a short comic. There couldn’t be a more fitting Gothamite for Batman day than Sarah Johnson. A character that is often taken too seriously by himself and by fans alike, Batman’s appeal to many is that he is nothing more than a man with resolve. And lots of money. Being a regular human being, Batman will obviously have his regular citizen moments. His Ordinary Batman Adventures.

Sarah is a Storyboard Artist currently working for Nickelodeon – yes, that Nickelodeon – on The Loud House, having also worked with Fairly OddParents (I did fangirl a little when I saw that, I grew up on this cartoon) and Bunsen is a Beast. I found her Batman work while scrolling through Tumblr and immediately sought all of the series. It put a really big smile on my face. Sarah’s work can be found on her Tumblr, Instagram and official website.

Batman, out. I need to find a codename for myself.