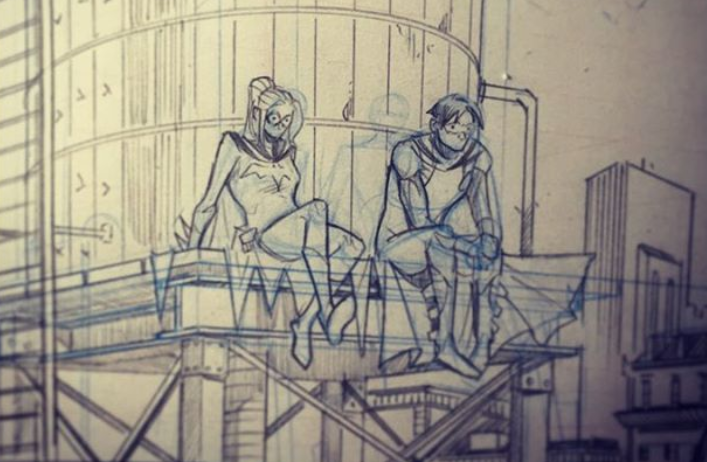 Doesn’t matter who your favorite Robin is, or if you are on the “Batman works better alone” team, the undisputed biggest news in Gotham last week was the beginning of “Lonely Place of Living” in the pages of Detective Comics. Tim Drake will soon return to the land of the living, and as the universe would have it, last week creator of Tim and many other characters MARV WOLFMAN, was honored with the Lifetime Achievement Award from the Hero Initiative. “Helping comic creators in need” is the motto of this not-for-profit organization aimed at building a fund destined to helping comic book creators in need. Standing with Wolfman in the hall of the life-timers are his partner in crime George Pérez, Joe Kubert, Neal Adams, John Romita Jr., Stan Lee and others. A well worthy cause. And to celebrate the all-time classics of comic-dom, nothing better than to delight our eyes with some ALEX ROSS goodness as he pays homage to the TV – and silver screen – heroes.

As if our hearts were not taking enough as it is, this week we are going to be getting Selina’s answer to Bruce. While not commenting on the answer itself, TOM KING confirms that it will be either a yes or no. No fingernail can withstand the power of my anxiety.

With “A Lonely Place of Living” hitting stands last week, EDDY BARROWS shared a whole batch of shots of his originals – with Eber Ferreira’s inks already done or otherwise – on his Facebook page. The pages include the last few of the issue when Tim meets Batman inside prison, the revelation of who this Batman is in fact, and Doomsday breaking free. Beyond those, he also shared a couple of other pages, including Tim talking with Mr. Oz about his life as Red Robin and him remembering his first encounter with Dick and Alfred, straight from A Lonely Place of Dying. The current story arc is connected to Action Comics’ “The Oz Effect”, but the plots are not dependent on one another. JAMES TYNION suggested that Action Comics #988 should be read for a better understanding of what is going on in Detective Comics, but that it is not required reading. He was also asked if we would see Tim in the original Kingdom Come Red Robin costume, but for the writer “that costume will always be a Dick Grayson costume and not a Tim Drake costume.”

With White Knight coming out this week, SEAN MURPHY has been giving some insight into the backstage of his creative process. Some bits and pieces such as him having his Joker wear eyeliner so that it would run down his cheeks when he is laughing so hard he cries, and his camera height of choice being at eye level or lower when drawing cars, since “Cars are designed to look good from eye level.” We also got to see his Arkham Asylum.

A bigger piece of news is that Duke Thomas will be appearing in White Knight. Murphy righteously gives himself a bit of credit for the creation of the character, remembering his and Snyder’s story in Detective Comics #27 where he gave Batman an African American Robin. If you keep your eyes glued to the details when reading it, you’ll see memorial cases dedicated to Lark and Bluebird. Bluebird got introduced into regular continuity in the shape of Harper Row, and Duke was rumored to become Lark for a long time, but ultimately took the name of Signal. It was also revealed by Murphy that DC made an exception for White Knight in allowing him to have Bat merch in his universe. The company considers it to be “self-referential and too much of a ‘gag'”, but Murphy’s Joker is “an obsessed fanboy whose villainy is meant to motivate his hero”, and so he has a collection of Bat memorabilia. MARINI gave us the pleasure of seeing his concept art for both the Joker and Bruce.

DC All Access released a video covering all of the essential Rebirth reading to prepare for Doomsday Clock. The list is almost entirely taken by Batman and Titans, with a brief mention to Suicide Squad and Detective Comics. I would add to that list Detective Comics “A Lonely Place of Living” and Action Comics “The Oz Effect”, both coming out right now, along with the Superman Reborn crossover. And Watchmen, of course. As of the previous issue of Metal, Batman is MIA. From what CAPULLO teases, he seems to be having quite a rough time.

After The Red Death, last week it was time for the Cyborg evil version of Batman to have its story told. Batman: Murder Machine not only sold out, it sold out on the very first day of its release.

Coming next is Batman: The Dawnbreaker, the Lantern member of the Dark Knights. SNYDER sums it up with “What if Bruce tried to use the rings to bring back his parents and all went dark.“ His tweet came with a little tease of what’s to come. The issue is written by Sam Humphries with art by Ethan van Sciver. Batman: The Devastator got the same treatment, with SNYDER summing it up as “Batmans fear that he hasn’t done enough for a SM [Superman] contingency [because] of friendship.” The issue by Frank Tieri with art by Tony Daniel is due to come out on November 1. Another one to be teased was Batman: The Merciless, by Peter Tomasi and Francis Manapul. SNYDER says “After a decimating war, Batman chooses to deal w Ares once & for all”. MANAPUL himself also released two little peaks into his work, one of The Batman who Laughs standing with his evil Robins and the Devastator, the other of Batman, battle worn, holding Wonder Woman’s body. Merciless will come out October 25. So it would seem that listening to people talking while doing manual work is not so uncommon after all. CHRIS WILDGOOSE, as it turns out, listens to audio books on his old iPod Classic – those are indestructible, I have one to prove – as he works on his Batgirl pencils. He also shared a cute little Batgirl & Robin panel from an upcoming issue. Standing on rooftops, wearing colorful costumes, fighting crime, just as regular teenagers go.

KYLE HIGGINS gave us yet another glimpse of his creative process with TREVOR McCARTHY, this time of a page from New Order #2. Among other things, he says that “The way I tend to structure a story like New Order, is to drop readers into the world in issue 1, then give context in issue 2”, which is exactly what he’s been doing with New Order. Issue #2 hit stands last week, and we finally got to understand the whys and hows of Dick Grayson, Meta hunter. PATRICK GLEASON unearthed some of his early sketches of Damian with Titus. According to him, his idea was to give Damian the Robin equivalent of Ace, the Bat-Hound. Later, Gleason would give Damian yet another pet, the giant bat Goliath. On another cute front of Gotham, DUSTIN NGUYEN did an adorable Gotham City Sirens watercolor and we have the pleasure of seeing it. And talking about watercolors, JIM LEE made a stunning Batman piece for Orran children’s charity fundraiser.

We continue our globe-trotting to find the very best Gothamites, this week going to Paris to get Simon Delart. Simon is a graphic designer and illustrator. His technique and style vary, but he is most notable for his vector posters where he works with polygons of solid color to generate shade and shapes. In fact, he has just released a book which collects a whole lot of his polygon art.

He works with a wide range of references, but since we are in Gotham, we’ll keep it in Gotham. Not that it will narrow his work all that much, Simon has a variety of Bat-related art, all of which can be found on his portfolio. He’s got a Batman grappling gun poster from his gun series, comic book panels renditions, such as Batman being shot in Final Crisis, and even posters for the DC movies – my favorite one being the shield inside the shield inside the shield. But let’s get down to business. What really brought Simon here to the Batcave was his Animated Series posters.

Each featuring one of the main Batman villains, Simon made a series of posters for 10 different episodes of the series. When asked what got him into Batman and specifically the Animated Series, Simon told me that his father showed him the Batman ’89 Tim Burton movie, which was “terrifying but also fascinating”. He then discovered the Animated Series when he was seven years old. He says that “It was a revelation! That is still my favorite animated show ever. So now that I’m an illustrator, I use my skills to pay tribute to that universe I love!”

Out of Simon’s selection of episodes, four were listed in our recent Essential Guide to Batman: the Animated Series, them being “If You’re So Smart, Why Aren’t You Rich?”, “Pretty Poison”, “Heart of Ice”, and “Two Face“. The six other episodes chosen by Simon to get his amazing posters were “On Leather Wings”, “Christmas with the Joker”, “Nothing to Fear”, “I’ve got Batman in my Basement”, “Feat of Clay“, and “Mad as a Hatter”.